Sins of the father 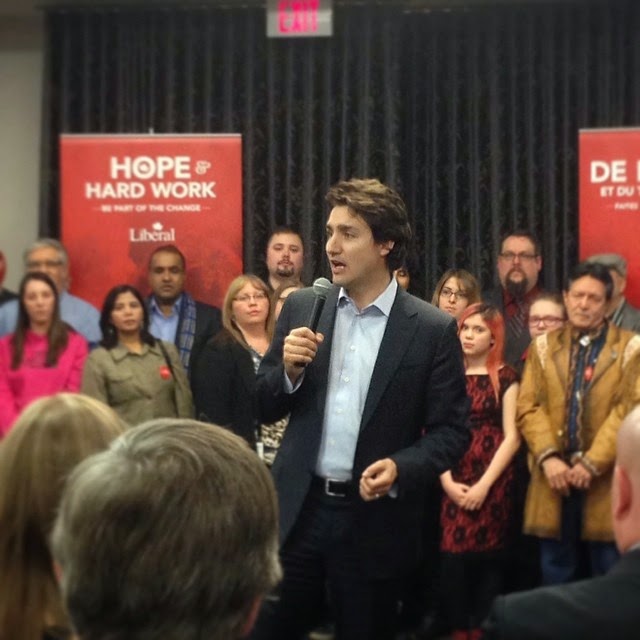 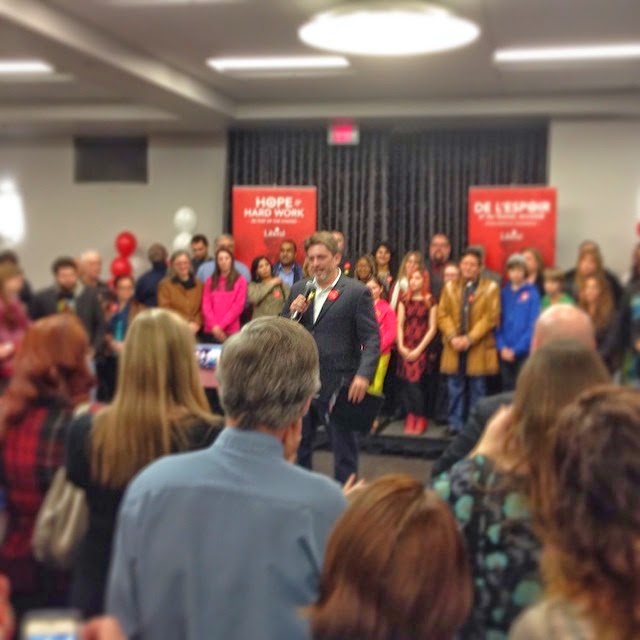 Party organizers, many of whom are good friends of mine, organized a well-attended and well-executed meet 'n' greet which included an effective stump speech by the leader of the Liberal Party of Canada.  In fact, Krista Balsom observed that it was one of the most attended and energetic political events that she had ever been to in Fort McMurray.  Even Mr. Trudeau seemed genuinely surprised by the density of human beings in the room.

I asked Dylan if he had any interest in attending the event, and to my surprise he said: "Actually yes, I do."  It was fun watching him work the room, going from one pod of people that he knew to the next.  As we were driving home, I complimented him on his gift of being able to socialize in that kind of environment.

"I've picked it up from you," he said, though I think his relational skills are far superior to mine. 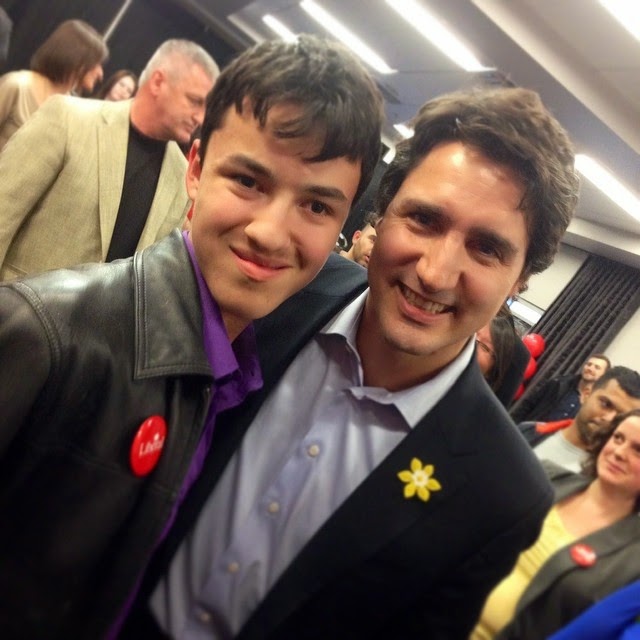 He waited patiently at the conclusion of the presentation for his 12 seconds with Mr. Trudeau. "You made a great speech," he said, as he finally got to shake his hand and make a brief connection with the man who could be our next Prime Minister. 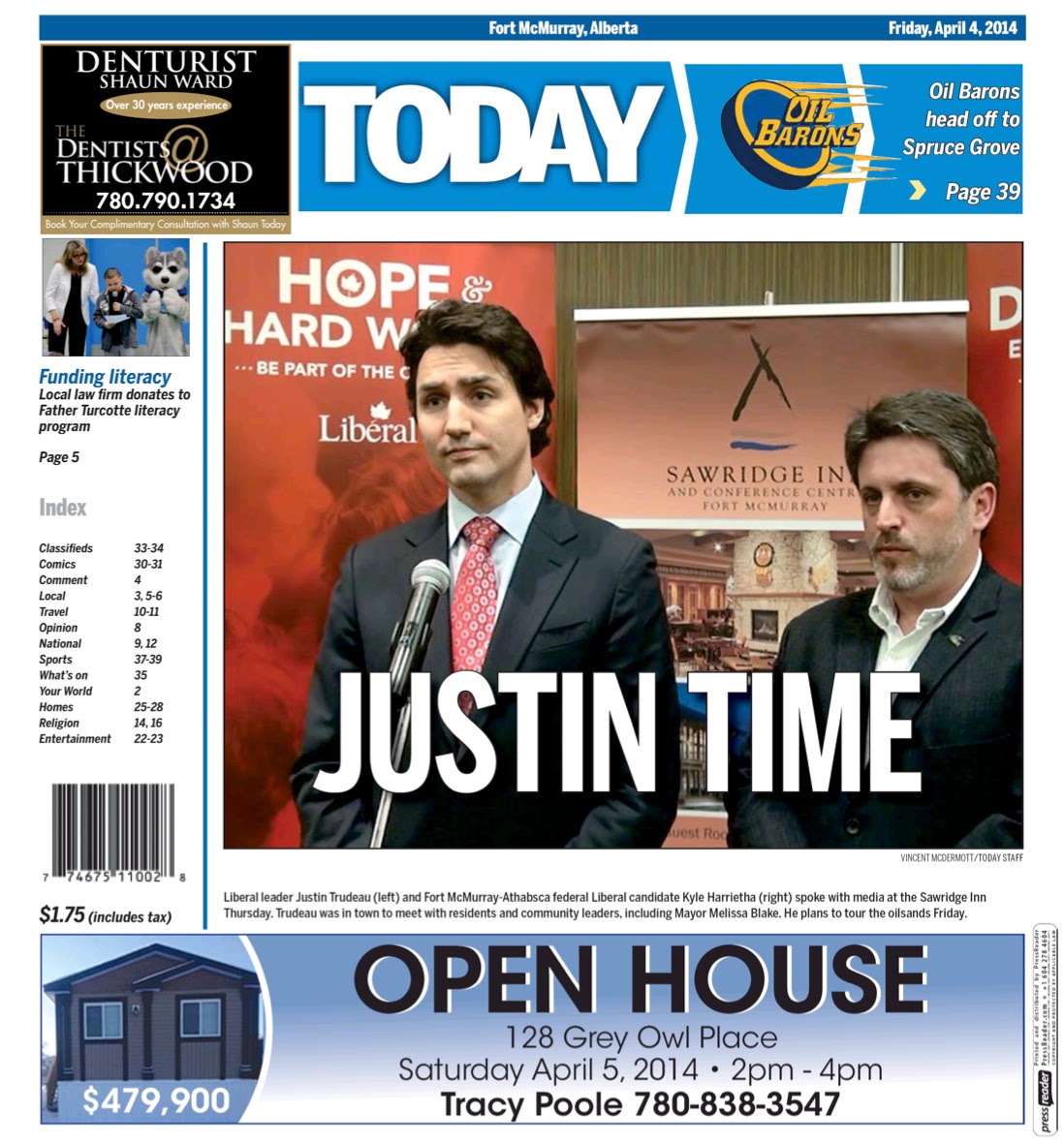 I think I understand why Justin Trudeau might have been a little trepidatious coming into the room last night.  Alberta has not been friendly to federal Liberals, largely because of the sins of Justin's father.  There remains a lot of deep and festering wounds about the impact of the National Energy Program and the way that Trudeau the elder made the West feel like second-class Canadians, the forgotten cousins on the wrong side of the Canadian shield.

The vitriol on social media as excitement built around the arrival of Justin yesterday was sharp, cutting and resolute.  Steadfast and hardcore Conservatives piled on and cast aspersions and assumptions with careless abandon.

My knowledge of federal politics is embarrassingly small.  I can't comment intelligently about the policies of Justin Trudeau, Stephen Harper, Elizabeth May or Thomas Mulcair, except what might be on Twitter on that particular day.  This is a necessary growth area for me, especially as we near the by-election to replace our former MP Brian Jean.  All of that is to say that I don't know whether to buy into the lofty, utopian vision and youthful mystique of Mr. Trudeau, or to cry havoc and let slips the dogs of war because the Liberal party is a wolf in sheep's clothing - at least to those of us in Western Canada.

One thing is certain: this by-election is not a certainty for any party.  It is possible that Kyle Harrietha and his well-oiled and well-intentioned political machine could cause night sweats for the CPA, and whoever their candidate ends up being, either Arlan Delisle or Dave Yurdiga.  Perhaps Lori McDaniel, running for the NDP, or Tim Moen with the Liberitarian Party can come up the middle and pull off a stunning victory.  If there is one thing I learned in my short political life, anything is possible and that living in the land of assumption can be perilous.