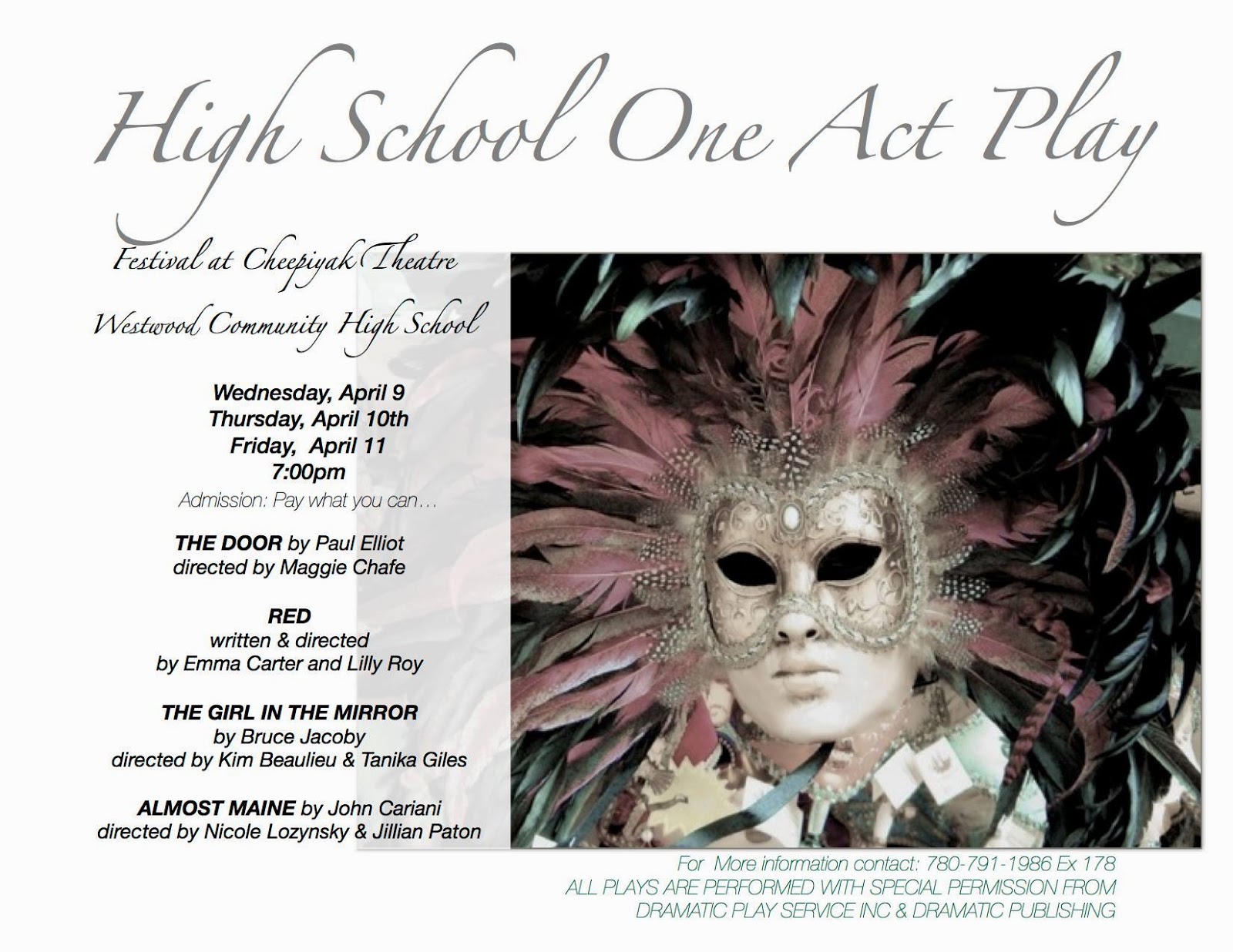 Hot on the heels of the successful Regional One Act Play Festival, Westwood students are putting the finishing flourishes on four plays that will travel down to Edmonton for the regional festival April 25th and 26th.  They will get to test run their shows for local audiences April 9, 10, 11 at 7 pm at Cheepiyak Theatre, their home base at Westwood Community High School.

I'm really glad that Terri Mort, Dramatic Arts teacher, and my revered Les Mis partner, has set things up that the students get to run their shows in front of an audience three times before heading south for competition.  I've participated in a number of one act festivals where we didn't have that opportunity, facing an audience and competing all at the same time.

"There are 30 students involved in this project with four groups each led by a senior Westwood student directors," said Mort.  "They have all chosen contemporary plays that offer a range of themes, although they mostly deal with social issues."

The groups have been working after school and on Sundays, squeezing into every available inch of space of the very busy Cheepiyak Theatre.  Many of them were at the adult festival this weekend, and you could tell their level of excitement about getting their work in front of an audience.

Here are the four offerings:

Directed by Maggie Chafe, The Door tells the story of a grandmother's plight dealing with a hammering on the door whilst having a conversation with a contrary grandson. The issue of hate crime is prominent with a surprise ending that shows some of the sad realities of life.

THE GIRL IN THE MIRROR

Directed by Kim Beaulieu and Tanika Giles, The Girl in the Mirror features a cast of 10.  It's a heavy drama that shows the pivotal moments of a suicidal girl as she hangs on to life in the ER.

Red is a self-directed, spoken word piece with original music and script by Lillian Roy and Emma Carter.  Looking at the contrasting lives of three young women, Red shares three journeys that lead to personal angst and despair.

Directed by Nicole Lozynsky and Jillian Paton, life in Almost Maine - a town outside of the state of Maine - is peppered by quirky characters.  The one act place looks at life, love and relationships in a small town.

Each evening of performances should run about two hours, with some mature themes more suited for and early teen to adult audience.  Admission is by donation with all proceeds going towards travel expenses to go to the regional competition.

From a community development perspective, I love watching high school drama productions.  One acts offer give students a chance to dive into what can be meaty material.  Based on the above descriptions, that certainly appears to be the case with these four shows.  I'm marking it into my calendar right now.
Email Post