On the day after they arrested one of the fellows responsible for the massive amount of tagging going on in Fort McMurray - over 150 tags have allegedly been attributed to him - I'm wondering about the motivation.  Why? 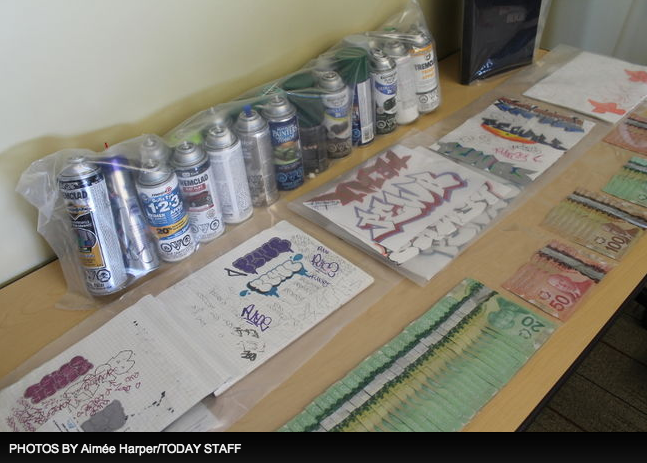 The standard bust shot in the Fort McMurray Today shows a table with spray cans, drawings, a dead marijuana plant, and a whole bunch of cash fanned out to increase the WOW factor.  Is the prolific tagging related to an illicit drug business?  Was the tagger "marking his territory", so to speak, his imaginary dealing zone?  This is my naivety shining through, because I really don't know.

I wonder several things, as the newspaper article didn't completely close the loop for me.  Is this young fellow still in jail?  If not, what is to prevent him from tagging again?  How is this going to end for the guy if he is found guilty when he goes to court? 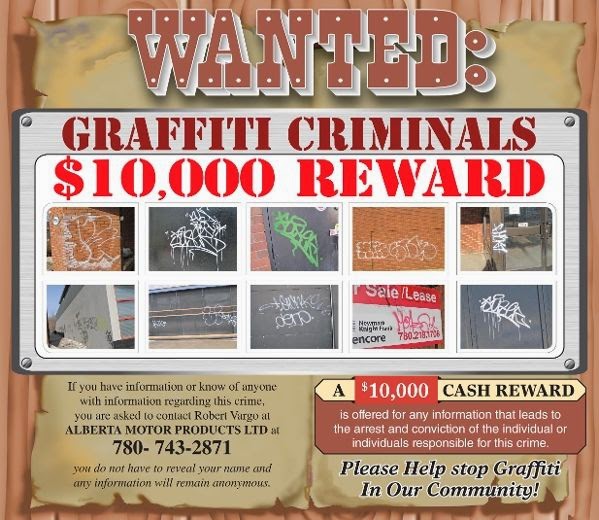 One thing is certain: Mr. Tagger - you'll notice I'm not using his name; the last thing I want to do is give him extra publicity - is in a whole pile of trouble.  He's also upset a local business owner who is super-motivated to eek out as much justice as the law will allow.  This individual put up a $10,000 reward to the person that provided information that led to the arrest.  It sounds like the wild West doesn't it?

If the driving motivation for the tagging was not directly connected to illegal gang activity or sales of cannabis, it begs the question of what was driving this guy?  Was it an identity crisis?  Perhaps he was feeling under recognized, under acknowledged, and this was his dysfunctional way of crying out for attention?  I'll leave it for the RCMP psychologists to figure this one out.

Setting aside my personal concern for a young man who has made a series of bad life decisions, I'm grateful to our RCMP officers who brought about the arrest, and the arrests of several more suspects in this spate of tagging that had been escalating in recent weeks.  I'm equally grateful to the citizens who stepped forward with information that assisted the investigation.

I'm looking forward to the bylaw graffiti/tagging abatement bylaw initiated by Councillor Ault in terms of the long-term impact it will hopefully have on the reduction of this community image-pummelling form of property damage.  For now, we can celebrate a small victory and continue the process of cleaning all the "Pubes","Piners" and various other monikers scattered throughout our community.
Email Post