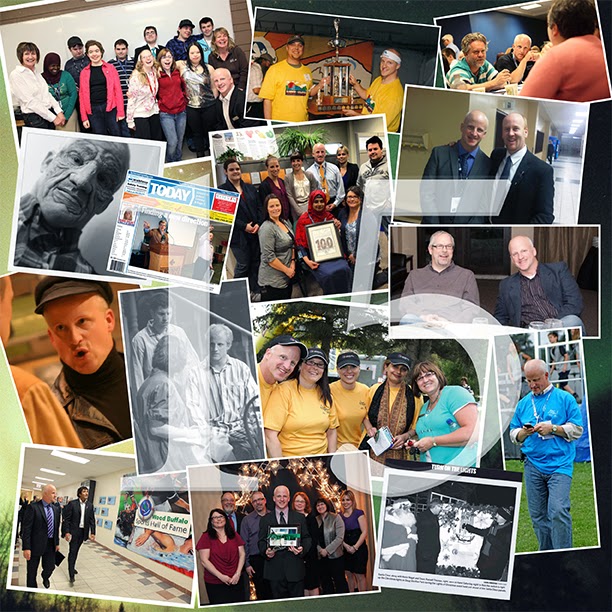 Keyano College was a big part of the reason I came to Fort McMurray.  Kelly Boyd, general manager of CJOK and KYX 98, took me to see Keyano Theatre as part of my tour when I was here interviewing for a programming job.  It was one of the crown jewels of the community at the time (and still is, in my opinion).  I don't remember who let us in - maybe it was Alan Roberts or Stephen Boyd; they were both working there at the time - but the moment I walked in, I was enamoured.

I was offered a job, accepted it, loaded up a big truck with the accoutrements of my life and made the move from Drumheller to Fort McMurray in February 1996.  It wasn't long before I found another excuse to head back to Keyano Theatre as they were hosting an open house.  The set for It Runs In The Family was on the stage as Alan gave a small group of us the ins and outs of what being a volunteer with the company was all about.

In that first year, I helped build set pieces for Crazy For You and acted in the 99-cent Theatre production of Twelfth Night.  Several more roles came my way in the years that followed before I moved from the OK Radio Group to Keyano College in the role of publicist in 1999.  I started in April of that year; Dylan was just a couple of months old, so tiny, and freshly home from the hospital.  They wouldn't let him go home till he could safely be installed in a car seat, which meant that it was mid-March before we could spring him loose.

Julie Brown was general manager of the Theatre department at the time, Darold Roles was artistic director, and Doug MacRae was president of the College.  The institution was still recovering from a period of serious retrenchment following the Klein cutbacks.  Resources were in short supply, the Fort McMurray economy was only beginning to ramp up, and salaries were a fraction of what they are now. In fact, I took a $6,000 pay cut to make the move, which I supplemented by taking on any extra work they could give me.  We made ends meet, the economy picked up, as did the salaries and opportunities.

Moving to Keyano College was the best professional move I ever made.  It took me into a culture that enabled me to enhance my skills in a multitude of areas: marketing, communication, graphic design, writing, stakeholder relations, community capacity building, strategic planning and so many more.  I was surrounded by people - within the department and throughout the College - who were eager to share knowledge, encourage growth, embrace challenges, forgive failures, and celebrate successes.

As a cohesive and dynamic team, Keyano Theatre made historic strides in those magical years between 1999 and 2006.  We finally burst through the glass ceiling in terms of subscription sales, eventually eclipsing 2,000.  We also lit up the Box Office with blockbuster shows like Jesus Christ Superstar (2001), The Sound of Music (2004), Annie (2005) and the production that remains on top of the list as the most attended, Beauty and the Beast (2006).

A large group of us from Keyano took some personal time and went on an amazing 10-day tour of Italy in spring of 2006 coordinated by Visual and Performing Arts instructor (and Chair at the time) Marie Leduc.  Traveling to Rome, Florence, and Venice, we saw some of the most amazing art and architecture in the world.  We also saw my ex-wife (who I hadn't seen since 1992), but that's a blog for another day.  While we were enjoying our penne and wine, things were shifting back home.  My contented life in the theatre was about to get upended, and I was completely oblivious to it.

Shortly after we returned, President Foote called me up to his office to ask if I would consider taking a secondment into the role of Manager, Marketing and Recruitment, or maybe it was Communications and Recruitment, I can't quite remember.  I waffled back and forth for a few days, seriously conflicted about letting go of the familiar and friendly, frightened to death of the land mines, rabbit holes and unknown curves that I perceived existed on the institutional side of things.  It took me a weekend of serious soul-searching to accept the challenge and move into a management role.

Taking the leap into a function that touched all aspects of Keyano College, I quickly realized how steep the learning curve was going to be, a leap that was healthy for me to take at that stage of my career.  I went from managing my own time and tasks into a world of carefully scheduled meetings, project deadlines, budgets, strategic communications and leading a small team.  Outlook Calendar became my lifeline.  Email, which used to be a 9-5 concern, all of sudden became an essential link, stretching into the home and eventually on to my mobile device.

These were significant growth years at Keyano College.  Provincial budgets were healthy, the economy was red hot, and finding people and space were becoming serious issues.  We posted great jobs - well, great from our point of view - and only got a handful of applicants.  Things were moving so fast in Wood Buffalo, that it was nearly impossible to keep up. We were losing people to industry and the municipality, and it was becoming increasingly difficult to attract the people we needed to do what we needed to do.  The province brought in the Cost of Living Allowance (COLA) at this time, which helped immensely, and the Board of Governors made some strategic compensation adjustments, which also had a significant impact.

Then 2008 happened.  The global economy took an unlikely and unparalleled plunge into recession.   Big plans for expansion got put on hold, provincial funding changed, and Keyano made the necessary adjustments to move forward as much as possible, given the austere climate.  Leadership change happened in the next couple of years as President Nagel took the reins and began a period of corporate transformation.  The provincial government focused in on low enrolment programs, the high profile arts cuts took place, and the bitumen bubble came into play.

I've spent the last year working with Arts Council Wood Buffalo on a generous secondment from Keyano.  That will come to an end on May 31st as I pass the executive director reins on to Constance Scarlett.  My office will be emptied of my personal effects, paintings taken down, keys and staff ID turned in, and I will walk out the front doors and move into a new phase of my life.

The memories are many, of wonderful celebrations, exciting Huskies games, spectacular productions, galas, convocations, smiles and hellos in the hallways, and laughter in meetings.  I treasure the people I've had the honour to work.  I owe each of them a debt of thanks, for the lessons they passed along, the kindnesses they offered, and in many cases, the friendships that grew and will endure.

On behalf of my family, a million thanks to Keyano College for everything.  We will remain steadfast friends, proud supporters, patrons and believers in the valuable work that you do in our region.
Email Post