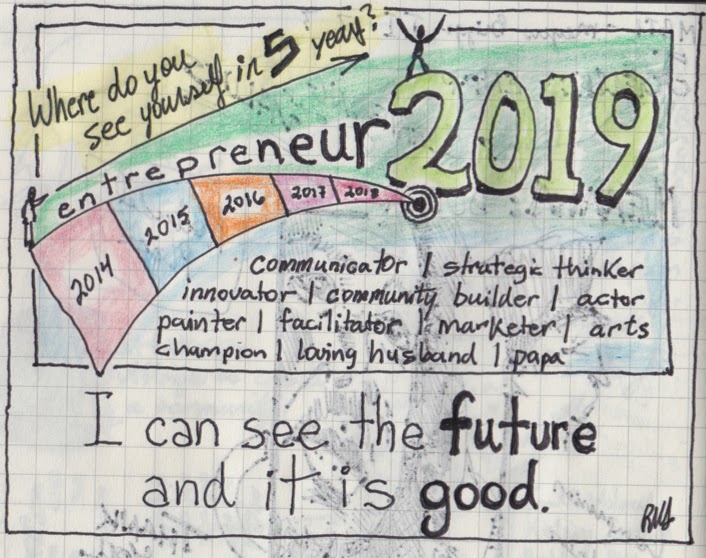 "Where do you see yourself in 5 years?"

How many people have been asked this question in a job interview and found yourself sputtering through a made-up-on-the-spot answer?

If we're still in Fort McMurray, we'll be in this house, our bungalow downtown just a few blocks from the river.  It will likely have changed in those years, flower beds re-designed, fresh coats of paint, and maybe the laminate floors have been changed out for the real deal, preferably weathered hardwood.  But it will still feel like home: familiar, comfortable, safe.

I see myself being more of an entrepreneur than I am now, not necessarily with the end goal of making loads of money, rather being more the captain of my own destiny and finding ways to construct/facilitate the changes we seek in the community.

In 5 years, I see a thriving summer arts festival that has grown into the signature event of the season, taking over the area in and around Jubilee Plaza for a surprising and sensational 10 days in August.  I'm not sure what it will be called but it will be rooted in local participation with provincial, national and international artists adding enormous richness to the experience.

I also see Shakespeare on the Snye being a cultural staple of Shell Place, using the amphitheatre side of the Nexen Stage.  An anticipated annual exploration of some of the Bard's best plays, Shakespeare on the Snye will provide invaluable work for aspiring young actors, along with a few aging thespians who spend their summer vacation time diving into roles like Goneril, Henry V, and Malvolio.

A new theatre project would have entrenched itself by 2019, an annual winter celebration of the work of Canada's most prolific playwright.  The (Norm) Foster Festival will feature a number of light farces and classic comedies, bringing much-anticipated brightness to the darkest part of the season.  Mr. Foster, who was present for the inaugural event will return in 2019, and bring national attention and acclaim for Canada's newest and most unexpected theatre festival.

A half decade from now, I see a dynamic community creative space, a place where artists of all kinds can co-mingle, collide, and collaborate.  With studio spaces, rehearsal rooms, and a common space with coffee shop that doles out the best brew in town, the creativity hub will birth innovation, spark conversation, and give a sense of connection to a burgeoning arts community.

In 5 years, City Centre development will have proceeded apace, with few memories of the bumpy ride it had back in 2014.  The Sports and Entertainment Centre will be the crown jewel of all medium-sized markets in Western Canada, the anchor stop for A-List artists, and the home of a well-supported junior hockey team, and myriad attractions and events.  It will have catalyzed development in the surrounding blocks and created an entertainment district that includes a great mix of national chains and successful independents.

The Golden Buffalo Centre towers over the City Centre at the corner of Franklin and Hardin, a shining example of architectural excellence, sustainable building practices, and practical use of commercial densification.  Its construction, begun in 2015, sparked a mini building boom with private dollars flowing in at a rate never seen before in Fort McMurray.

While it took a few more years than originally envisioned, the pedestrian bridge linking City Centre with MacDonald Island will have been opened a few years previous.  With the traffic frustrations and emergency egress issues dominating conversations after a number of successive 20,000-plus person events on the Island, it became clear that something had to be done.  A version of the bridge, designed back in 2013, was brought off the shelf, given an inexpensive dusting, and the project moved forward with an unforgettable opening for The Craze in 2017.

I am older in 5 years, but I've managed to keep relatively fit.  The Middle Age Bulge blog, heading into its 10th year, now contains almost 3,000 posts.  I'm finding more time to paint and to fish, thanks to career choices that provide more flexibility and personal time.  Heather's business is soaring, but still provides her, and us, with the time we desire to travel.  Each year we go to an exotic location, rent a house, and spend a month taking in the flavour of the place and the people.

In 5 years, I am a communicator, strategic thinker, innovator, community builder, actor, painter, facilitator, marketer, arts champion, and long-since-recovered politician. I am a loving husband, "Papa" to Dylan and Ben, and a fierce ambassador of Fort McMurray and Wood Buffalo.  There is a lot to be said for consistency.