On The River - a tribute to Dorothy McDonald-Hyde 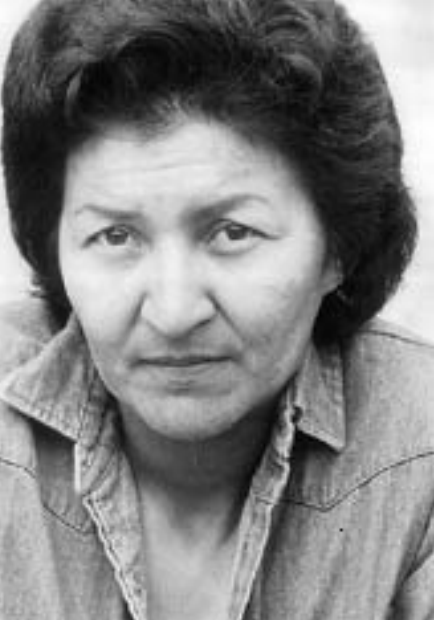 I had run into Rod Hyde, our neighbour and former principal of Fort McKay School, at the grocery store late last week.  We had a great conversation, as we always do, then parted ways to do some additional shopping.  He came and found me again a few minutes later and invited me to a special presentation that was happening at the Fort McKay Band hall on Saturday night.  Ground Zero Productions, out of Edmonton, along with singer/songwriter/storyteller Maria Dunn and the vocal trio Asani were presenting a creative piece called "On The River" in tribute to Dorothy McDonald-Hyde, his late wife and former Chief of the Fort McKay First Nation.  She was also the first elected female Aboriginal chief in Alberta.

The look in Rod's eyes really said it all for me: that this was going to be something special.  We decided to make it a family outing, driving 45 minutes to the hamlet, to learn more about this amazing leader and lady who lived out her final years in a house just a few doors down from our own.

"If you did, she would have been in a wheelchair by then," he said.  "We'd often see you pass our house when you were out for a walk."

Dorothy served four terms as Chief in the years between 1980 - 1992.  According to the event program, during this time, she laid the groundwork to acquire the basic services for the community that they enjoy today, such as water and sewer facilities and fire services. 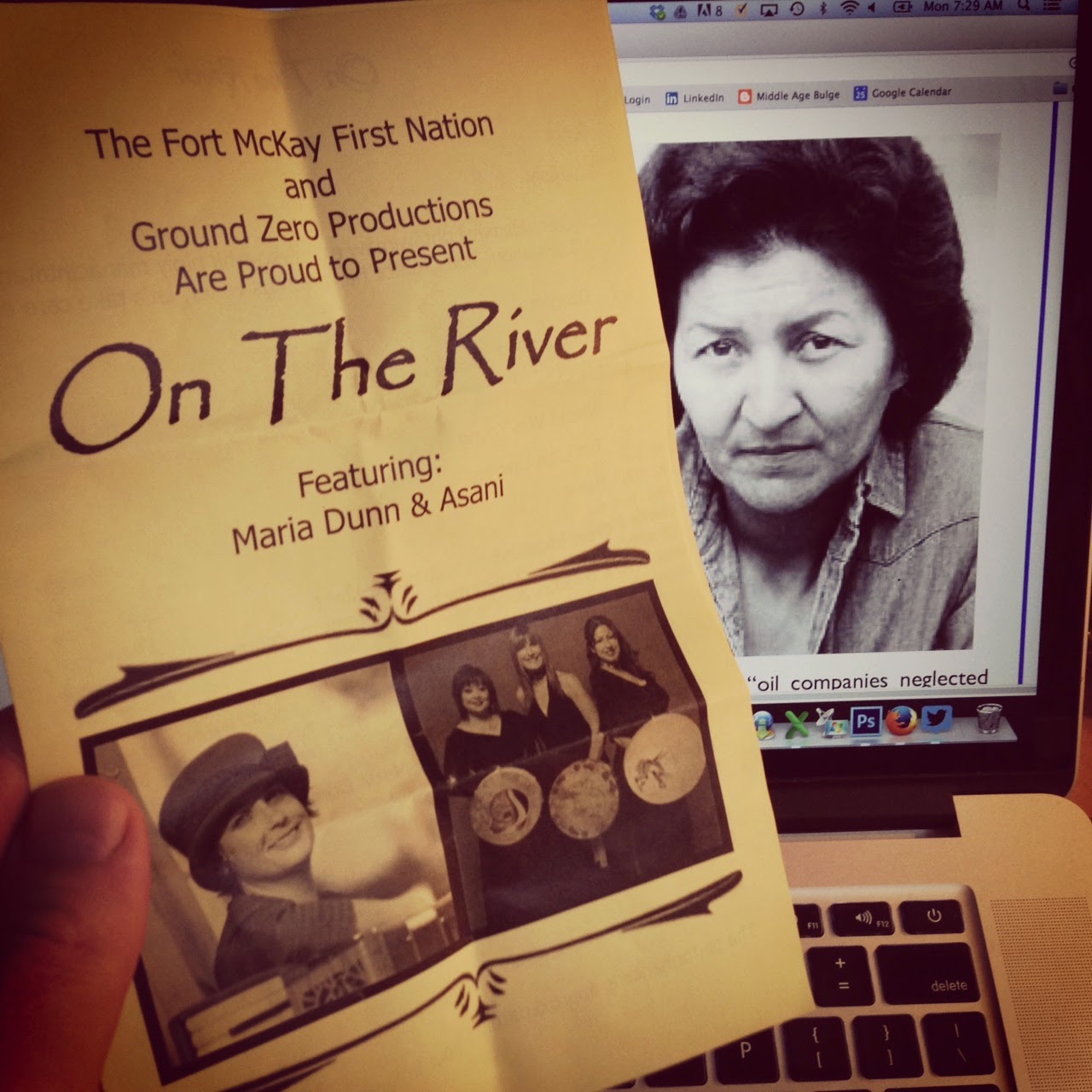 Set in the stunning and circular Band hall located in the Dorothy McDonald Business Centre, the performance began with a slideshow presentation put together by students of the Fort McKay School back in 1977.  It was a wonderful step back into history, seeing the community through the eyes of its young people.  They shared their love for the traditional ways and for each other.  They also talked candidly about the encroachment of industry and how it affected their way of life.

Reconciling the past with the future was present through the entire performance in tribute to Dorothy's leadership, illuminated by interview footage from years ago, and interviews that were conducted over the last three years.  She saw that change was going to happen, and she saw it as her responsibility to fight for her people so that they could reap the benefits of the enormous (and unstoppable) development that was happening around them.

From blockading the road in protest of dangerous logging trucks careening through the community, to facing off against the company lawyers, biologists, and consultants, Dorothy was a force to be reckoned with, a respected and visionary leader.  Her planning was instrumental in developing the Fort McKay Group of Companies, which started small, with only a handful of employees and contracts.  Today it is a significant operation with about 1,000 employees, depending on the time of year.

Our son Dylan is a member of the Fort McKay First Nation.  His mom, Nadia Bouchier, is a long-time resident, and niece of the current chief, Jim Boucher.  It was important to us that he took the opportunity to see this creative work and learn more about the history of the community.  And while he didn't initially want to go, there was no question that he was glad that he did.  His eyes lit up as familiar faces were interviewed and as the spirit, character and integrity of the former chief shone through. 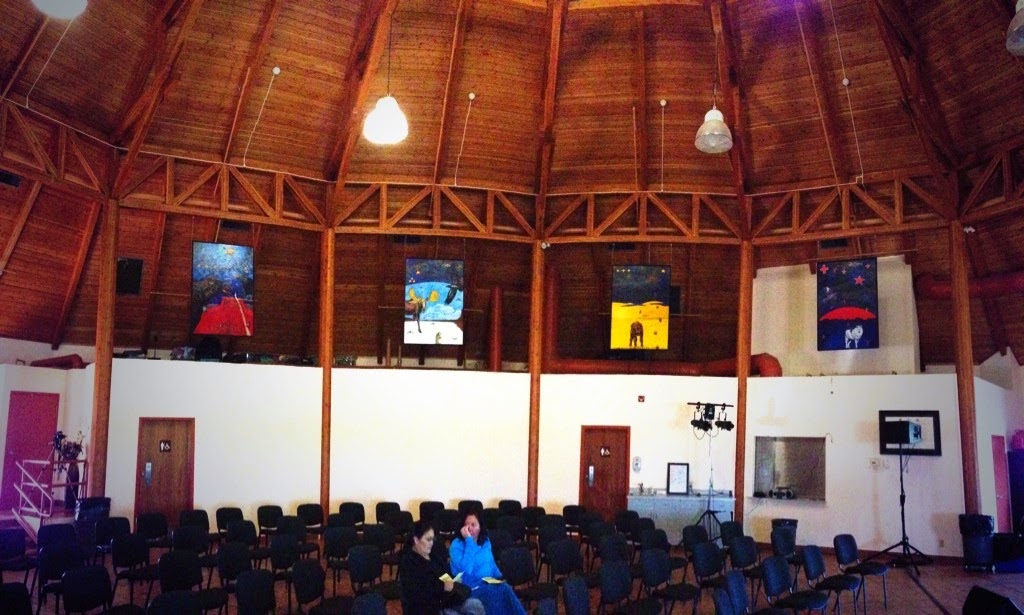 Surrounded by stunning paintings by Fred McDonald, embraced by the warmth of the space, we enjoyed an evening of incredible music, an immersion into the history of a community, and a gained better understanding of one of their most revered leaders.

I think this is an important Alberta story that deserves to be seen and shared.  While it expressed strongly the impact of oil sands development on traditional ways - trapping, hunting, fishing, berry picking - water and air quality, and various other casualties of trying to survive adjacent to one of the largest construction projects in the world, it does so in a way that is genuine, balanced and personal. 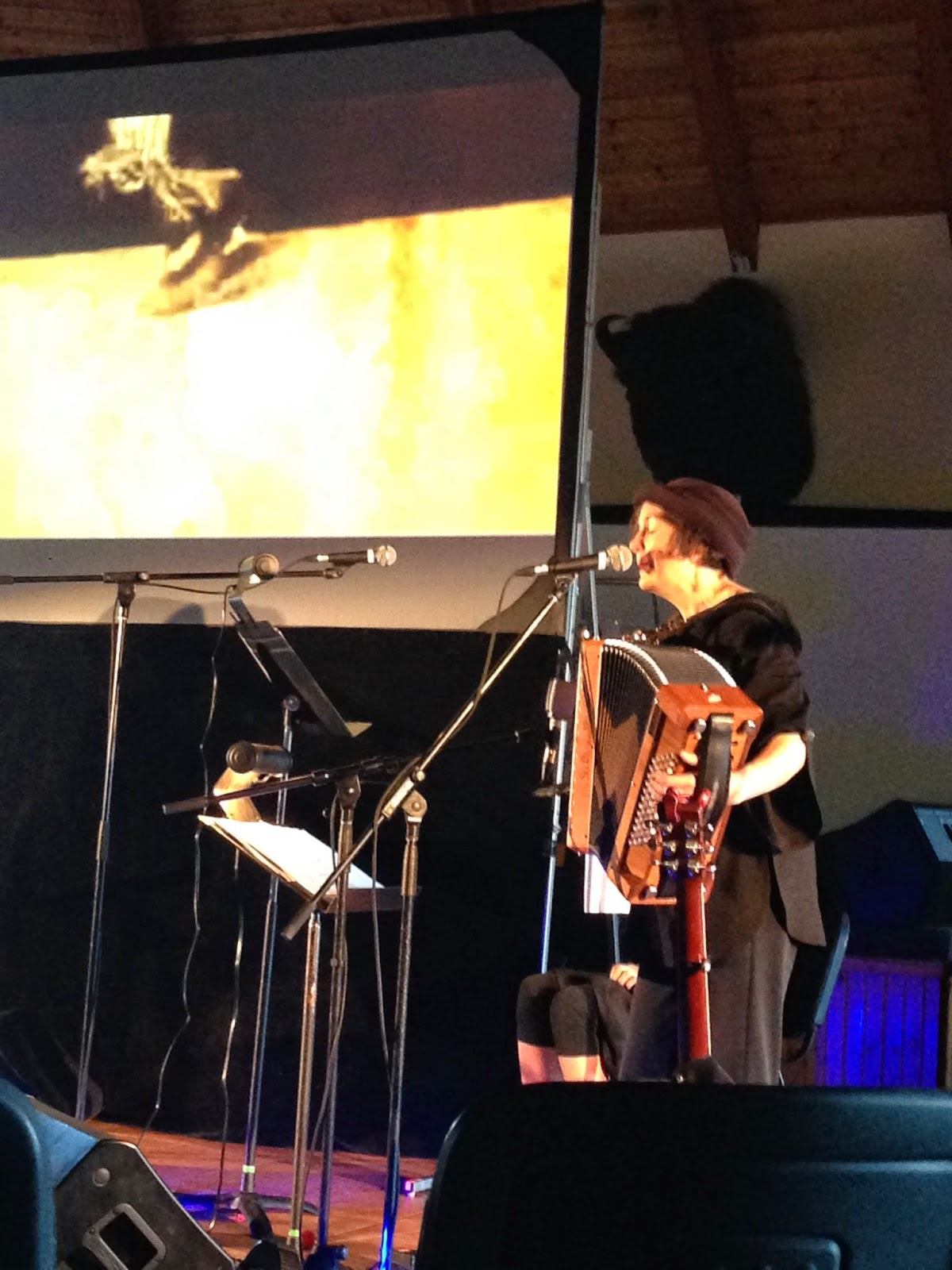 In talking to Don Bouzek, Artistic Director of Ground Zero Productions, the Fort McKay performance of "On The River" was the next step in the development of the project.

"We want to make sure that the community is comfortable with how we've put this together.  Getting their blessing is essential before we share this with a broader audience.  This is their story, and we are honouring and respecting that."

The confluence of words, video footage, music and the beating of the drums inspired tears, anger, respect, love and understanding about a place, its people and its history.  Thank you to Maria Dunn, Debbie Houle, Sarah Pocklington, and Sherryl Sewepagaham for a magical performance, for sharing your talents and passion.  Thank you to Rod and Dayle Hyde, their family and community members, for sharing the story of Dorothy.  It was our family's honour to be witness to what was one of the most important creative works that we've seen in a long time.

Dorothy died at the age of 59 in 2005.  Cecilia Fitzpatrick, her youngest sister said "Dorothy is a legend who will always be remembered...a great warrior, pioneer, founder, Mother, Grandmother, Sister, Daughter, Wife and friend."

To read more about the life of Dorothy McDonald-Hyde, check out this story from the December 2005 edition of the Red River Current.  Click here.
Email Post