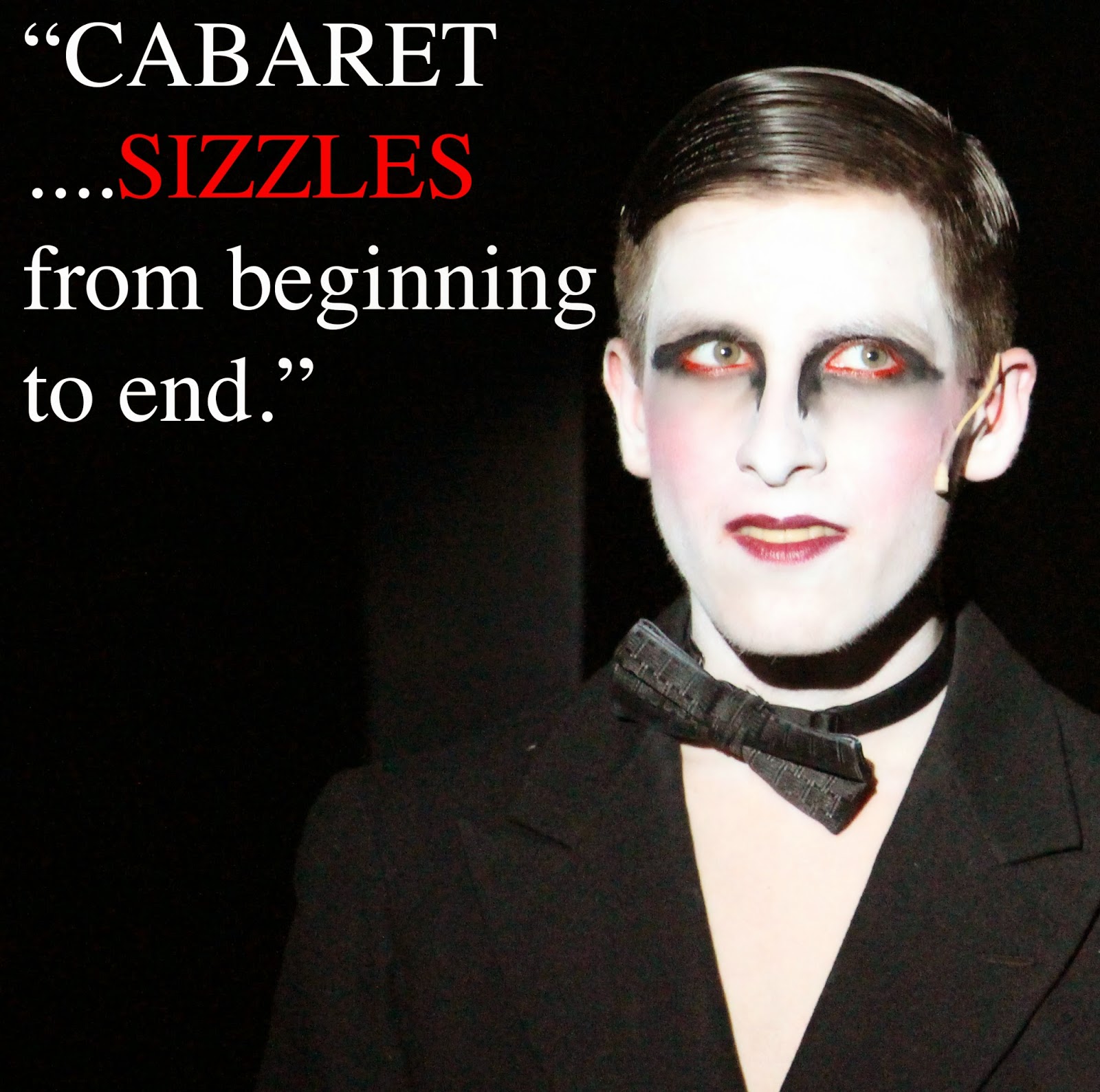 The music rolled through my head the moment I woke up after watching the opening night performance of Keyano Theatre Company's production of Cabaret.

Director Paul Gélineau has crafted a world for this production that sucks us into 1930s Berlin. It was a seedy, seductive, hedonistic hell hole - the 20th Century's Sodom and Gomorrah, according to designer Roger Schultz.

"The stuff that was going on in the clubs at the time was shocking by any standard," said Schultz.  "Sex, drugs, violence; it was all there.  This story emerges out of that reality, of a British nightclub performer Sally Bowles and an American writer named Cliff Bradshaw."

The rise of the Nazis was beginning, though politically, it was a time of many ideas and thoughts about how to run Germany.  Fascists, communists, social conservatives, monarchists all had a slice of the political pie.

The Emcee begins and closes Cabaret, brilliantly played by Colin Humphrey. Clever, sinuous, sexually ambiguous, the Emcee has a fragile, child-like quality that is a perfect metaphor for the times and the unassuming innocence that was about to get crushed.  Colin's voice, movements, sense of space and vulnerability are perfect.  What a brilliant way to close out his years in Fort McMurray before going off to the big bad world of being an artist.  Bravo! Bravo! Bravo!

Diana Moser returns to Keyano Theatre after her debut one year ago in Les Mis in the coveted role of Sally Bowles.  From the moment she appears for the first time, with the eye-popping V-shaped I'm-not-sure-what-you-call-it, she owns the stage.  Gorgeous, with a silky voice, Moser's physicality is a perfect counterpoint to the Emcee, who never seems to be out of reach.  Her performance of "Cabaret" is heart-wrenching and painfully beautiful.

"The guy has absolutely no talent whatsoever," said Paul Gélineau in jest during the post-show reception, with Campbell just within range of his voice.

Zenon is truly one of a short list of performers who popped into our world and blew us away immediately.  With the role of Cliff, he takes a more dramatic turn and knocks it out of the park, or in this case, the Kit Kat Klub. In one moment, Zenon is owning the scene, using every available inch of space to move the story forward, in the next he assumes a neutral stance and blends into the scene.  His instincts are incredible, contributing to an ensemble that sizzles from beginning to end.

Misty Oakes and Dave Boutilier are absolutely endearing in the roles of Schneider and Herr Schultz.  Their eventual union and ultimate disintegration provide a romantic through line that helps soften the story, make it more real.  Misty once again showed why she gets these amazing roles, as she is one of the most naturally gifted performers we have ever seen on the Keyano stage.  Meanwhile, Dave proved equally formidable and will soon be back playing the role of Oscar in The Odd Couple.

Adam Zacharias is one of the most unassuming people you will meet, but get him on the stage in a great role, and something magical happens.  He descends into the role of Ernst, beginning as a friendly face on a train and ending as a dyed in the wool Nazi.  Funny and friendly, feisty and ferocious, Adam nails it.

The ensemble is strong, physically and vocally, punctuating the big number scenes and painting the canvas throughout the story with their bodies.  The band is tight, subtle when they need to be, and absolutely swinging when the party really kicks in.

As I sit back and reflect on a great evening of theatre, I realize that I was left breathless with my pulse racing.  I couldn't believe how good it was and how much of an impact it had on me.  Images from the staggeringly powerful last scene are washing over me as I type these words, bodies falling, hearts sinking, spirits rising.

I had never seen Cabaret before last night, so I have nothing to compare it to.  However, in talking to designer Roger Schultz, the director has added some genius strokes that truly make it one-of-a-kind.  It is a first-class production - one of the finest I've seen - that has an ending that unsettled my soul and will stick with me forever.
Email Post