I lived in Port Alberni about 30 years ago. I went over the hump from Parksville for my third radio job. What started out as a weekend swing position turned into afternoon drive and eventually mornings. I did it all in those years: sports, news, reporting, remotes, and even sales. Frankly, I did whatever was asked of me and took every opportunity I could get to make some extra money. Earning a paltry $900 per month, I was literally scraping by. One thing I did not do was take the time to explore Cathedral Grove, an awesome patch of old growth forest on the western edge of Cameron Lake on the drive from Parksville to Port Alberni. While I may have stopped there a time or two, I don’t recall ever going on the various trails inside the forest. Heather and I made that right yesterday. 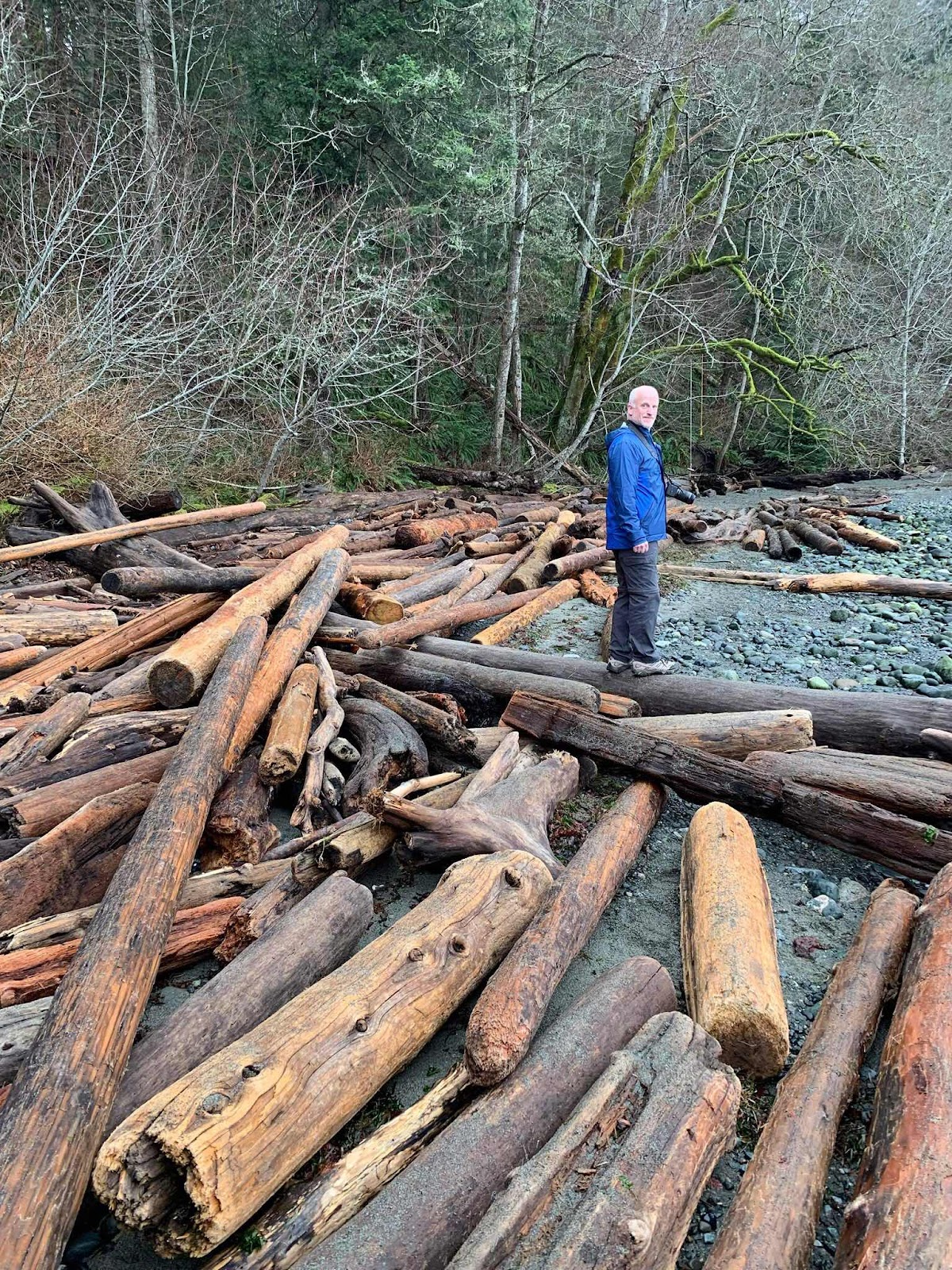 We drove along the old Island Highway so we could enjoy the scenic view over Georgia Strait and the wide variety of homes and businesses stretched along the coastal route. Heather wanted to stop into the tiny Fanny Bay Oyster Shop to see about getting some fresh oysters for dinner. It was a challenge to find, tucked in the back of the gas station/Subway stop at the Denman and Hornsby Islands Ferry Terminal. However hard it was to find, it had exactly what we were looking for: a variety of fresh oysters, hot sauces and oyster shuckers.  We told the lady working at the front that we would come back after our walk at Cathedral Grove. 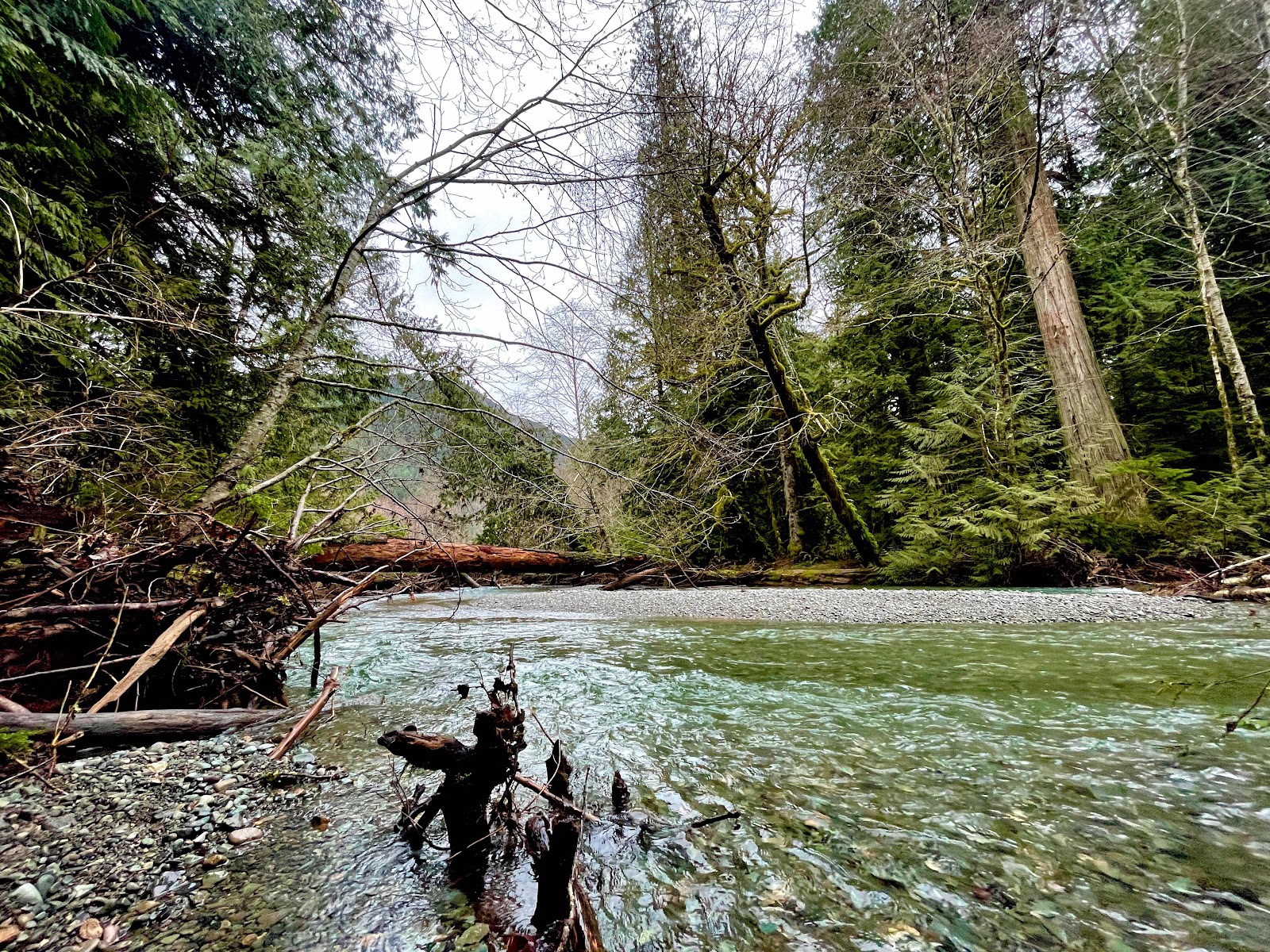 According to Google maps, the drive from our AirBnB spot in Courtenay should have been 45 minutes tops. It seemed like the drive ended up being several hours. Stop lights and speed limitations on the old Island Highway really slow things down. That said, it was a much more picturesque drive and way more relaxing.
“Russell!” yelled a fellow from the other side of the highway after we had arrived at Cathedral Grove.
I turned around said a quick “Hello?” My brain was on overdrive trying to figure out who it could be.
“You don’t know me,” he said. “But I recognized you right away. You painted a portrait of my father a number of years ago. I always meant to reach out to you to say how much it meant to me.” 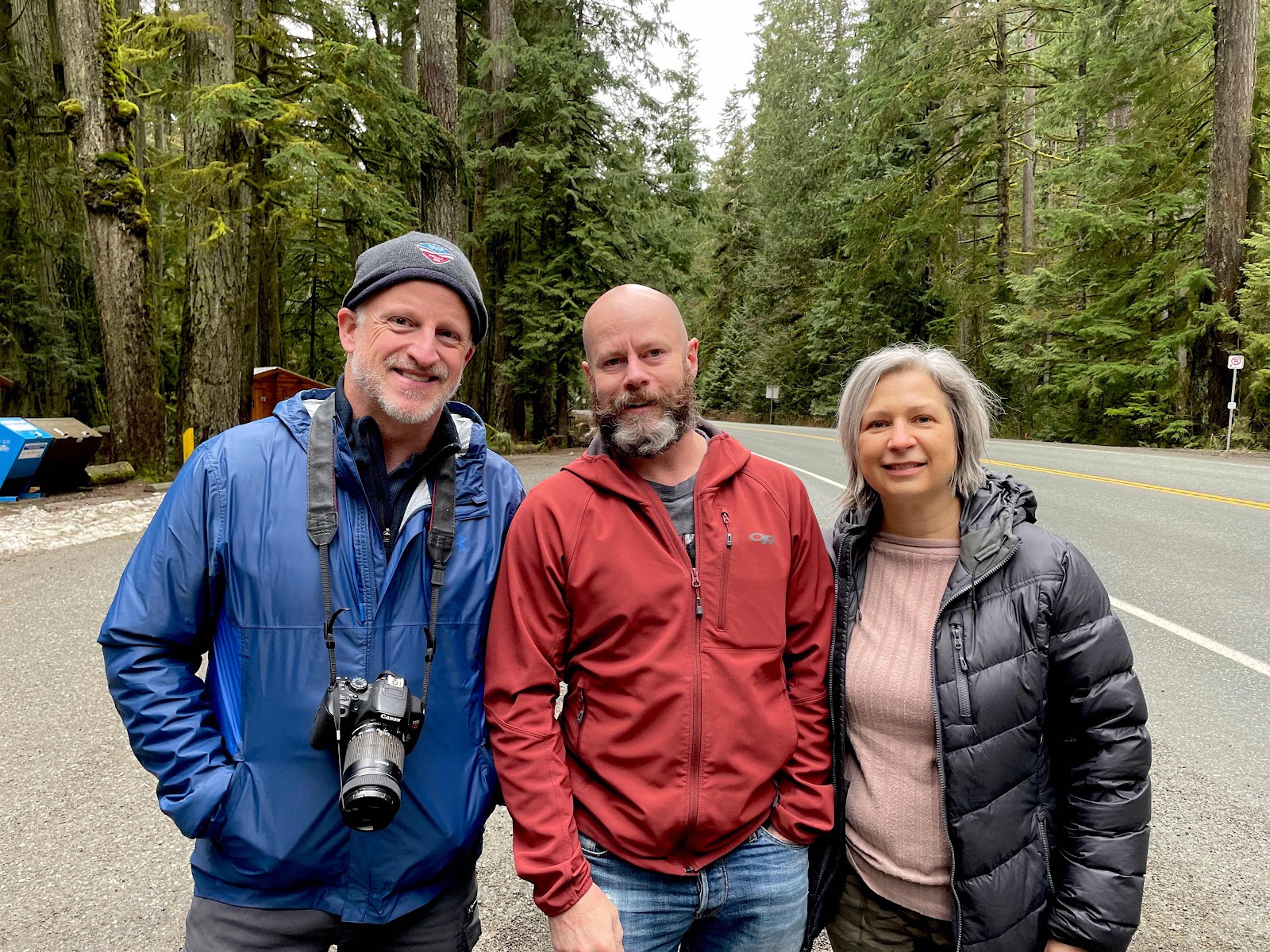 Jason and his wife Dawn are connected to our friends Brandon and Jodi in Fort McMurray. They had connected us to Dawn who wanted to surprise Jason with a painting of his father doing one of his favourite things: archery. 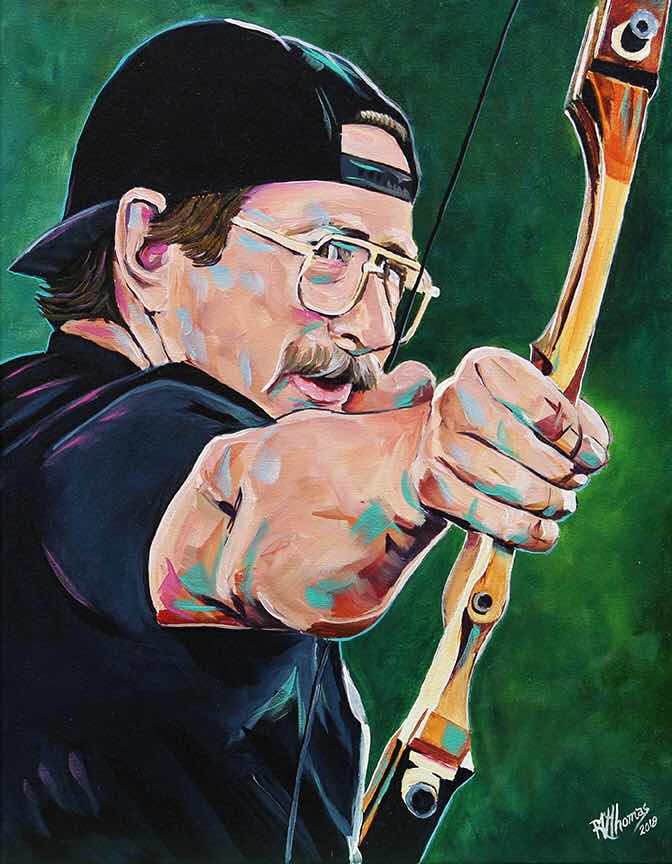 It was terribly kind of Jason to yell out when he recognized me. He obviously was very certain it was me because he didn’t hesitate. They were on their way to Tofino when we ran into them. 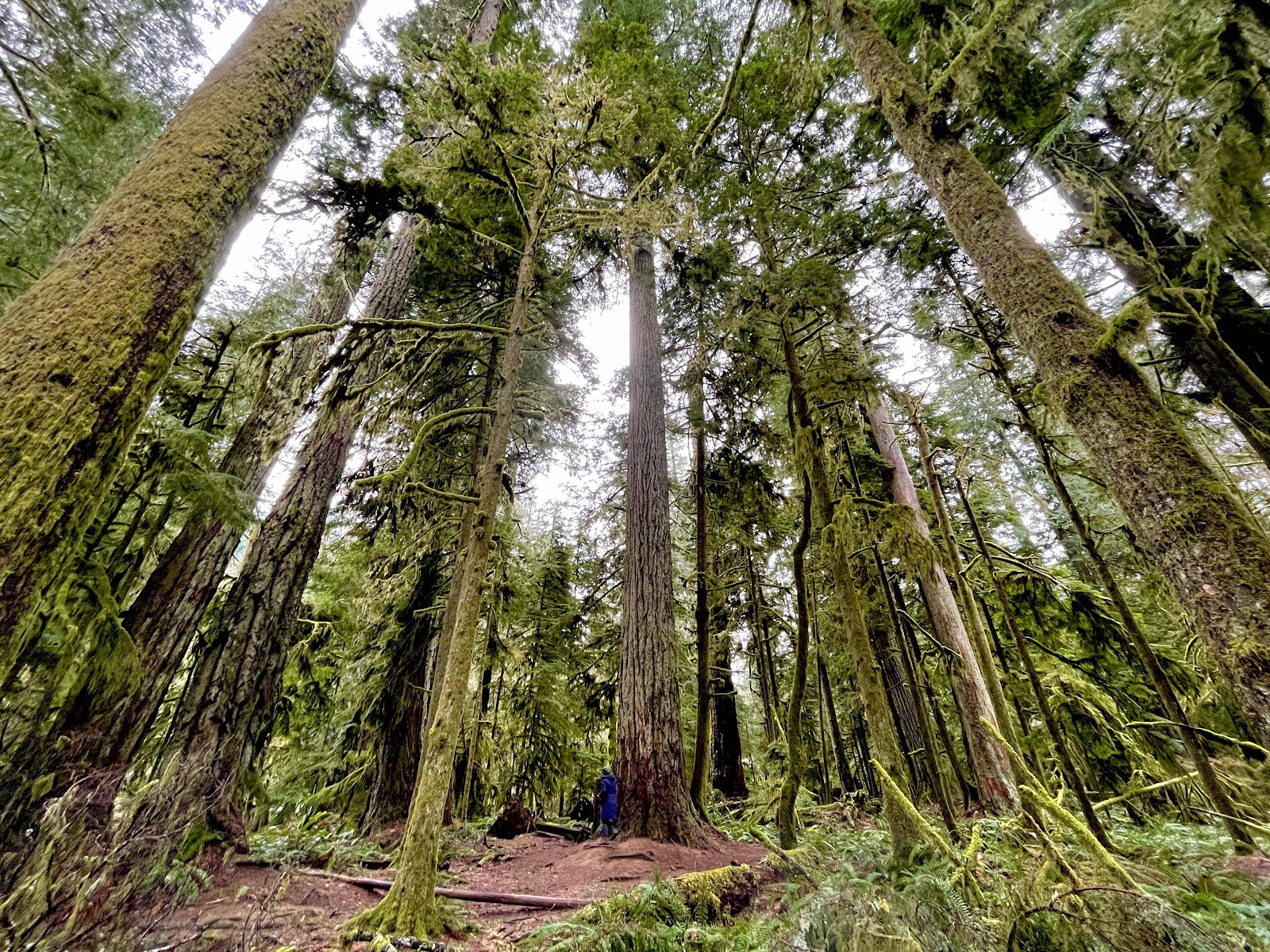 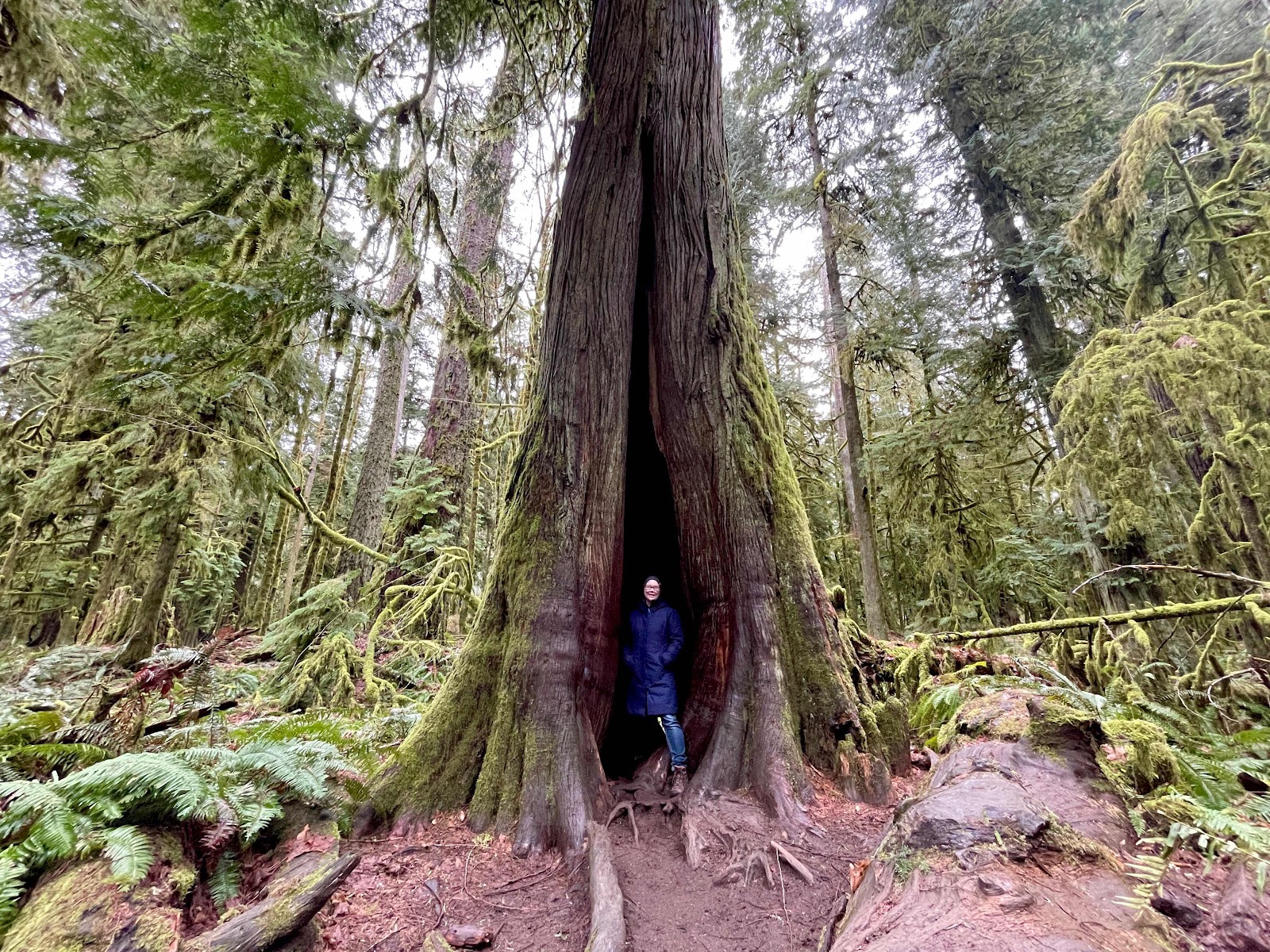 Cathedral Gove is a natural attraction loved by many. It’s a stand of impossibly tall trees that has been lovingly preserved and protected. It is also very Covid friendly with trail loops that have been adapted to allow a one way flow of visitors. A large wooden boardwalk has recently been constructed that not only protects the forest, it provides the wonderful smell of cedar, the building material of choice for wet and humid climates. 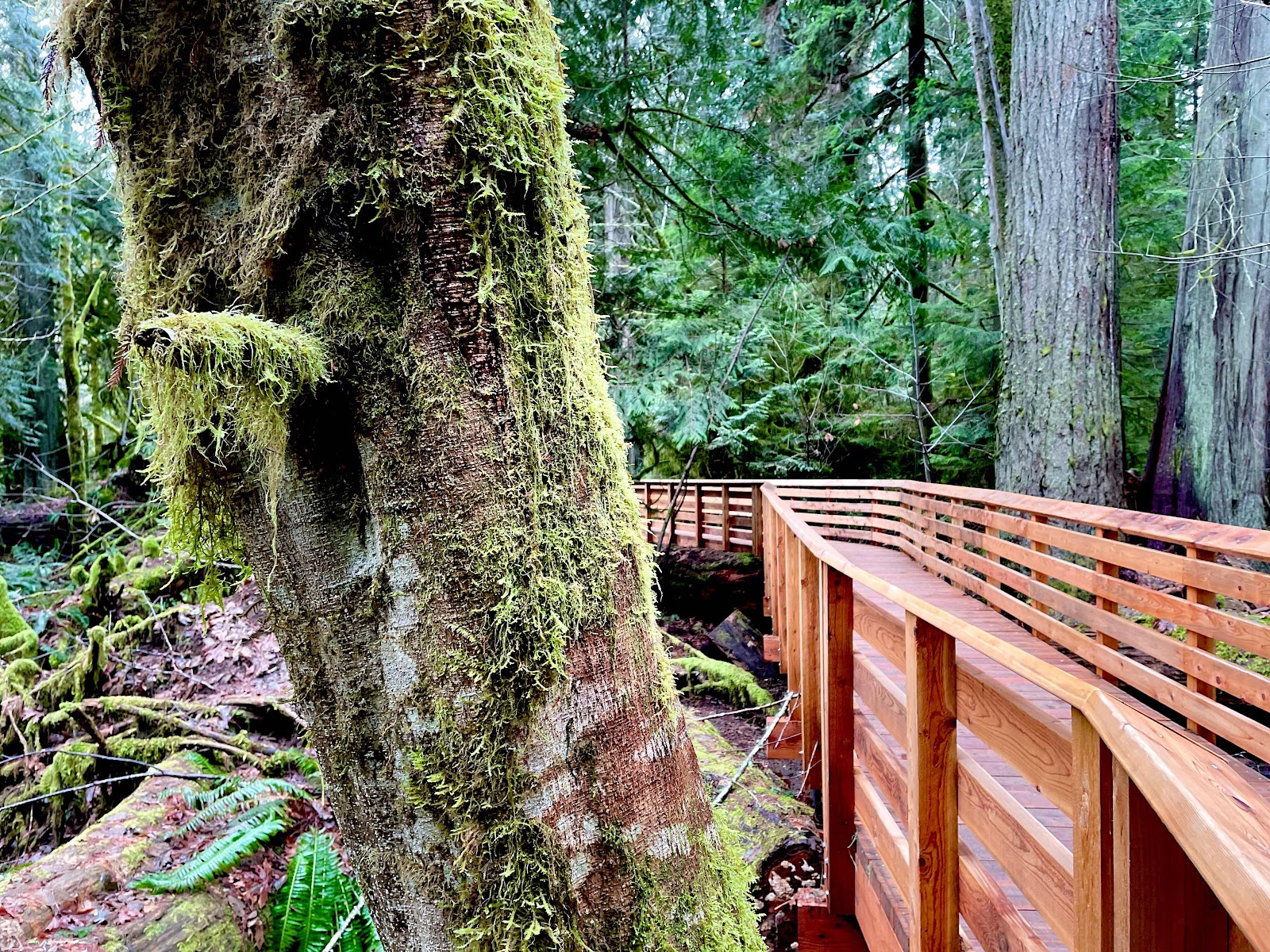 It had been about three decades since I last stood in that forest. I wondered if a really smart forester could reasonably estimate how much one of those tall trees had grown in height and girth in that time. Heather suggested that her brother might be able to figure it out. He’s a forest hydrologist with the government of Alberta. 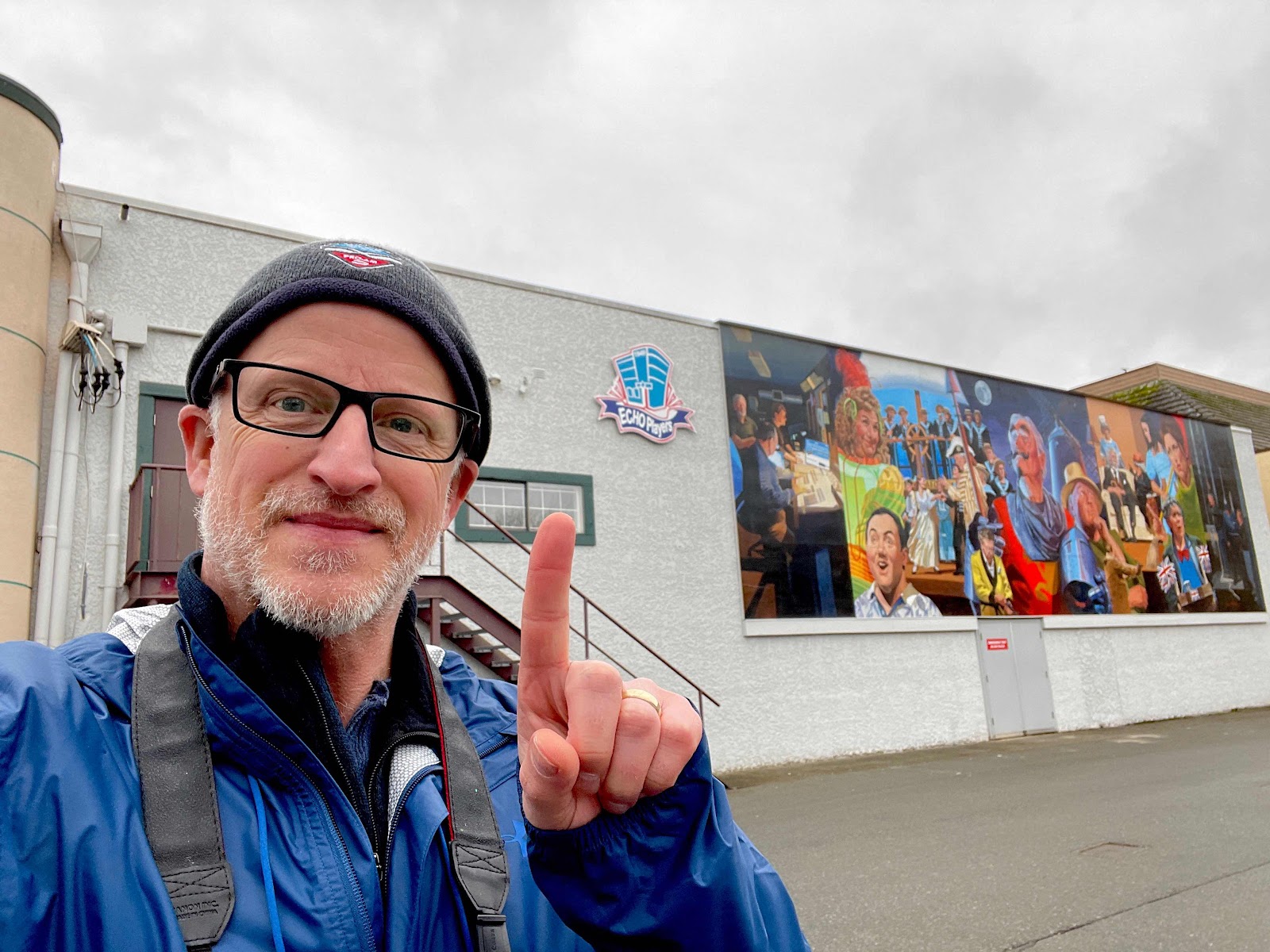 We finished up our walk and headed back to Qualicum Beach where we enjoyed a lunch downtown. We were about a block away from the local theatre where I had directed a show for Echo Players back in the early 1990s. My memories of that project are scant. It might have been a show called “Fallen Angels”, but I could be completely wrong. I’d need to consult my theatrical resume to be certain. 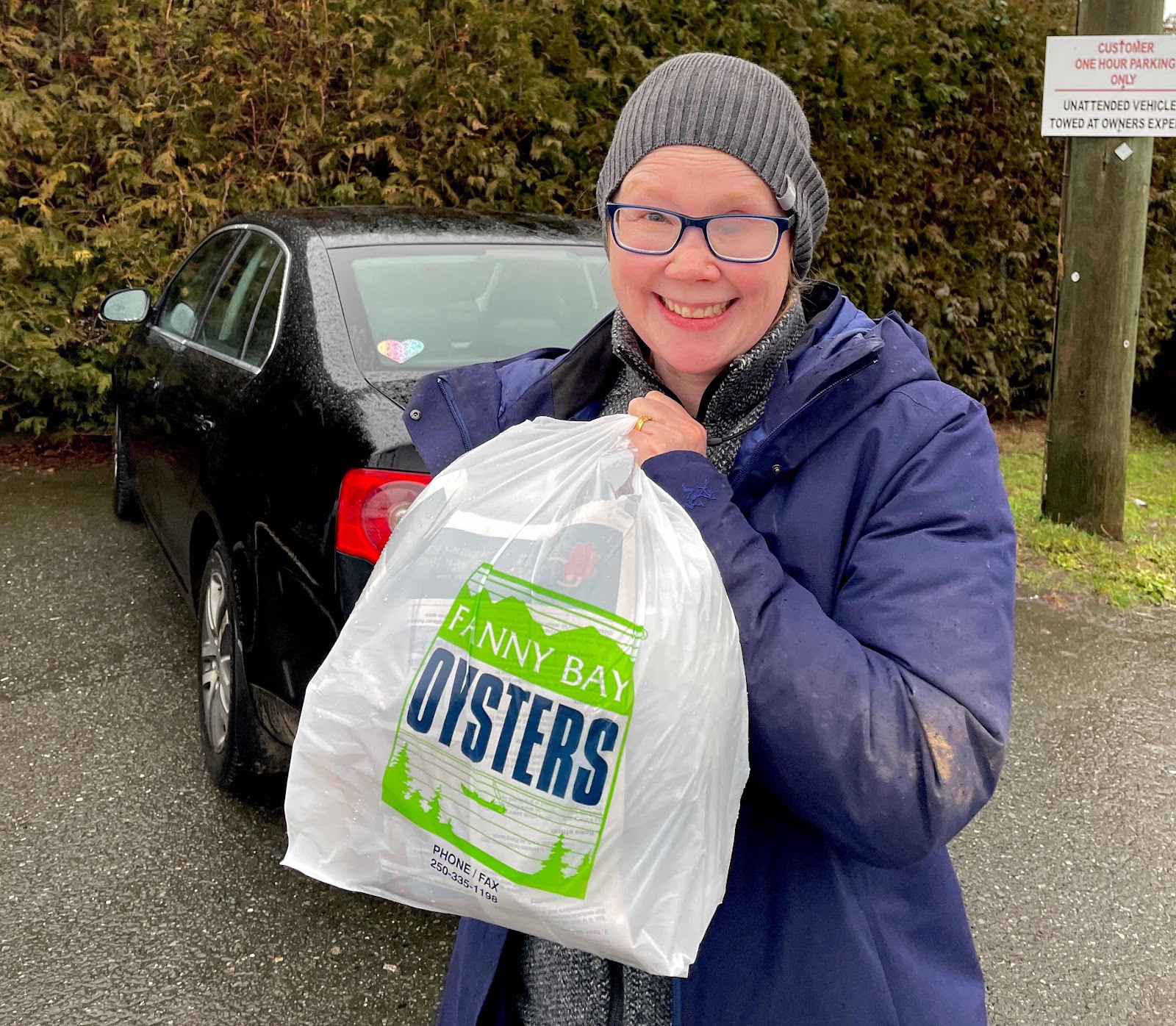 Back at Fanny Bay, Heather picked a selection of three dozen oysters and picked up a vinaigrette and horseradish along with a shucking knife. The fine folks at the shop put it all in a bag of ice and we headed home. 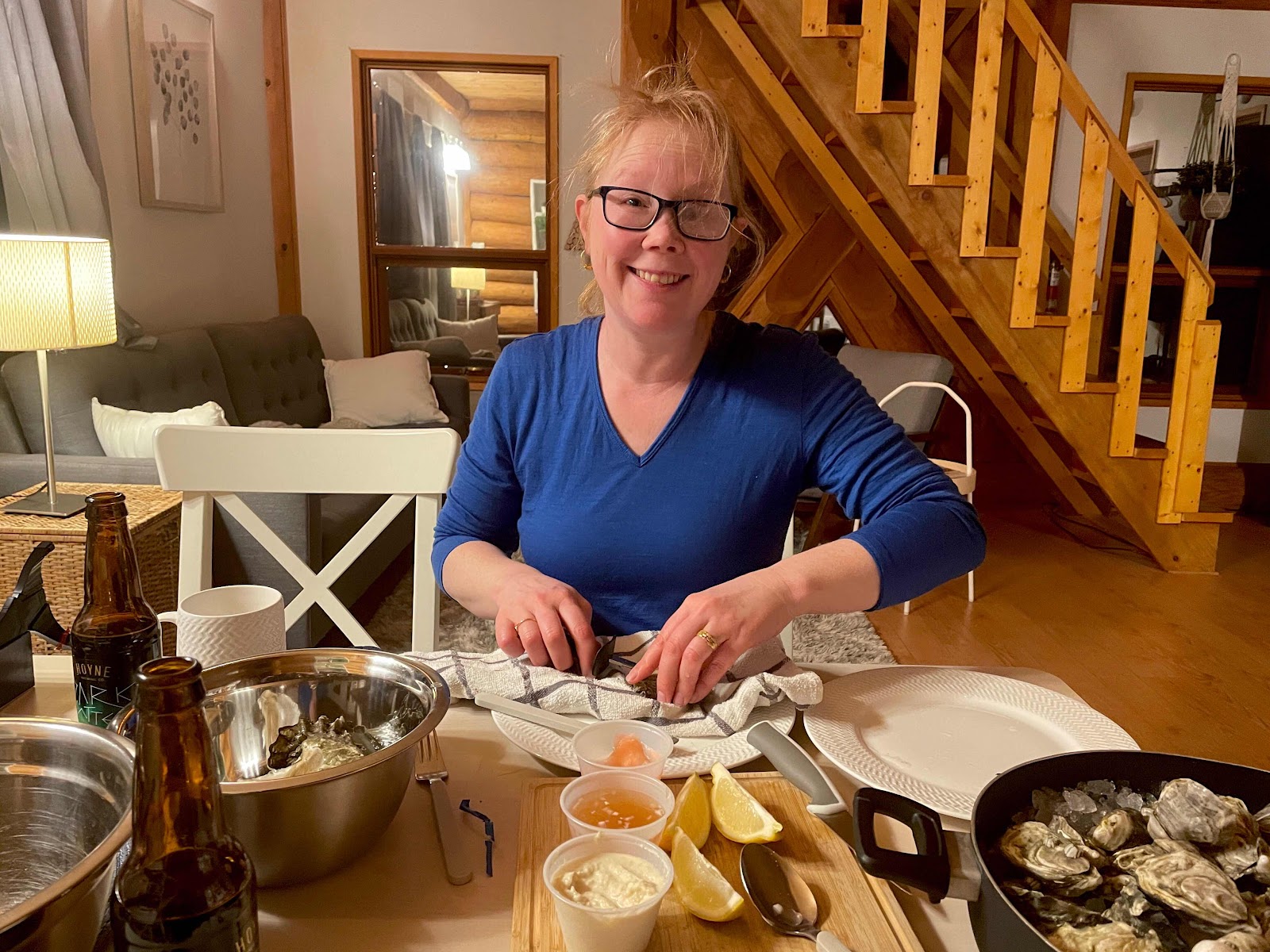 The shucking, while messy, proved to be easier than I imagined. Once you see how it’s supposed to be.done (Thanks YouTube), it’s not too hard. No harm or injuries occurred during the shucking of these oysters. It actually made for a delightful experience. We had 18 oysters each with a salad and I was totally stuffed. Buying the oysters and all the accoutrements straight from the source ended up being under $50. A similar meal in a restaurant would have been far north of $100. 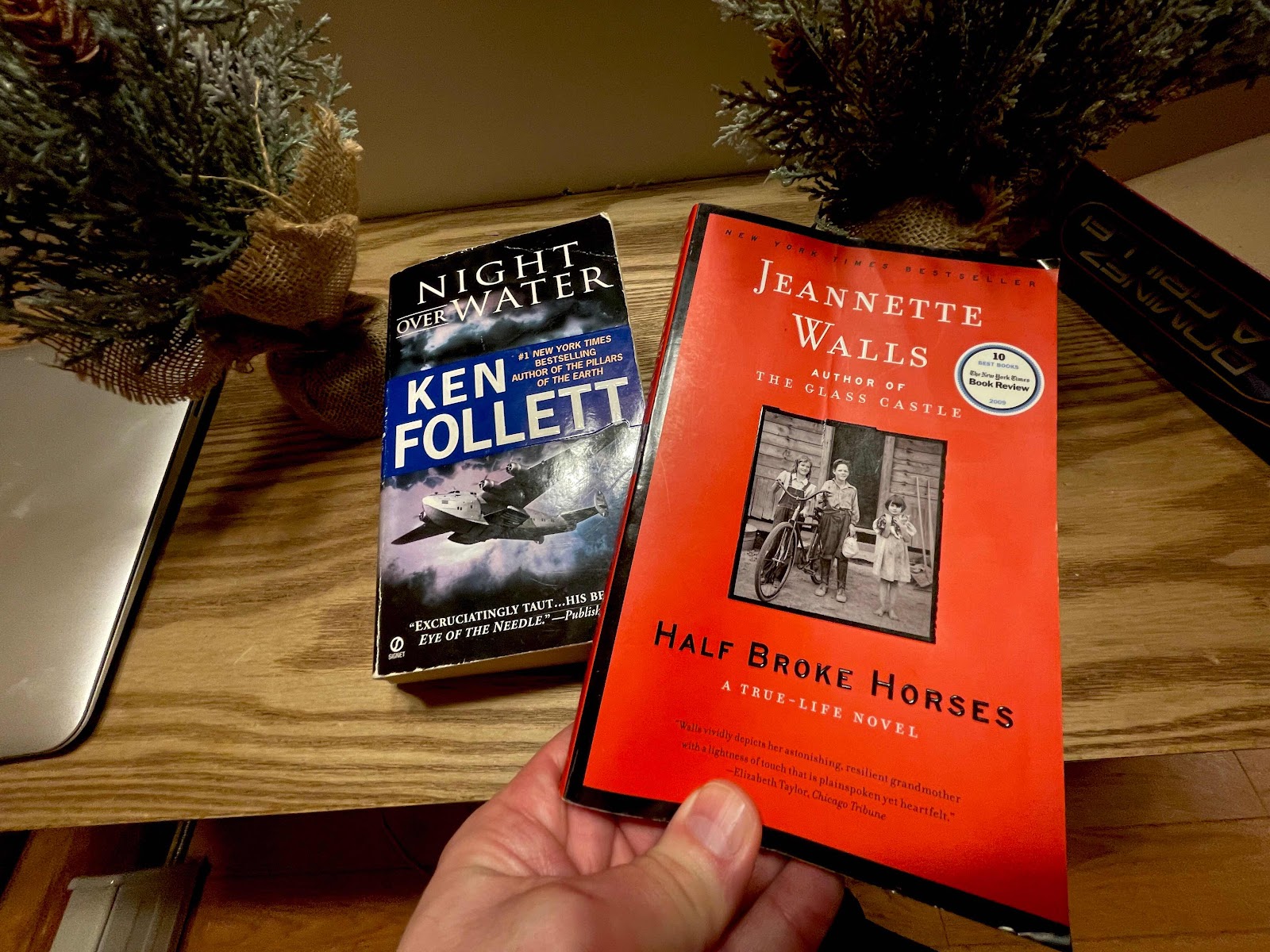 We spent the rest of the day reading, both tearing through the pages of various novels. I finished HALF BROKE HORSES by Jeanette Walls in one sitting, her grandmother’s story written in memoir form. She is such an amazing writer. I don’t remember that last time I tore through a whole book in one sitting. Heather did the same with Ken Follett’s NIGHT OVER WATER.
Email Post