It had been almost two years since I last flew. The pandemic took the wind out of our flying sails and reasons to do so. We arrived at the Calgary airport early enough to not have any issues. However, a crazy amount of travellers, long lines, and watching the clock tick-tock tick-tock closer to our boarding time injected considerable stress to the first leg of our journey.  I had forgotten about the inherent anxiety that comes with dealing with airports, crowds and flight times.
I did my best to stay calm and centred. I may have appeared so on the outside, but on the inside, I was deeply grateful to get on that plane and settled in my seat. The three of us - Ben and Heather were on the same flight - were all seated in different rows. I ended up next to a young home construction fellow from Grande Prairie. He was super talkative and we had a rare stranger to stranger conversation the whole way to Vancouver. I’m embarrassed to say that we didn’t exchange names. As I type this many hours later, he might still be on a plane somewhere. He was travelling Grande Prairie, Calgary, Vancouver, Paris, Mauritius. The anticipation of a reunion with his four-year-old son was motivating him to spend countless hours in airports and planes. I wish him God speed and a happy visit with his little one. The pandemic has done a lot of damage, including keeping a father and his son apart for over two years. 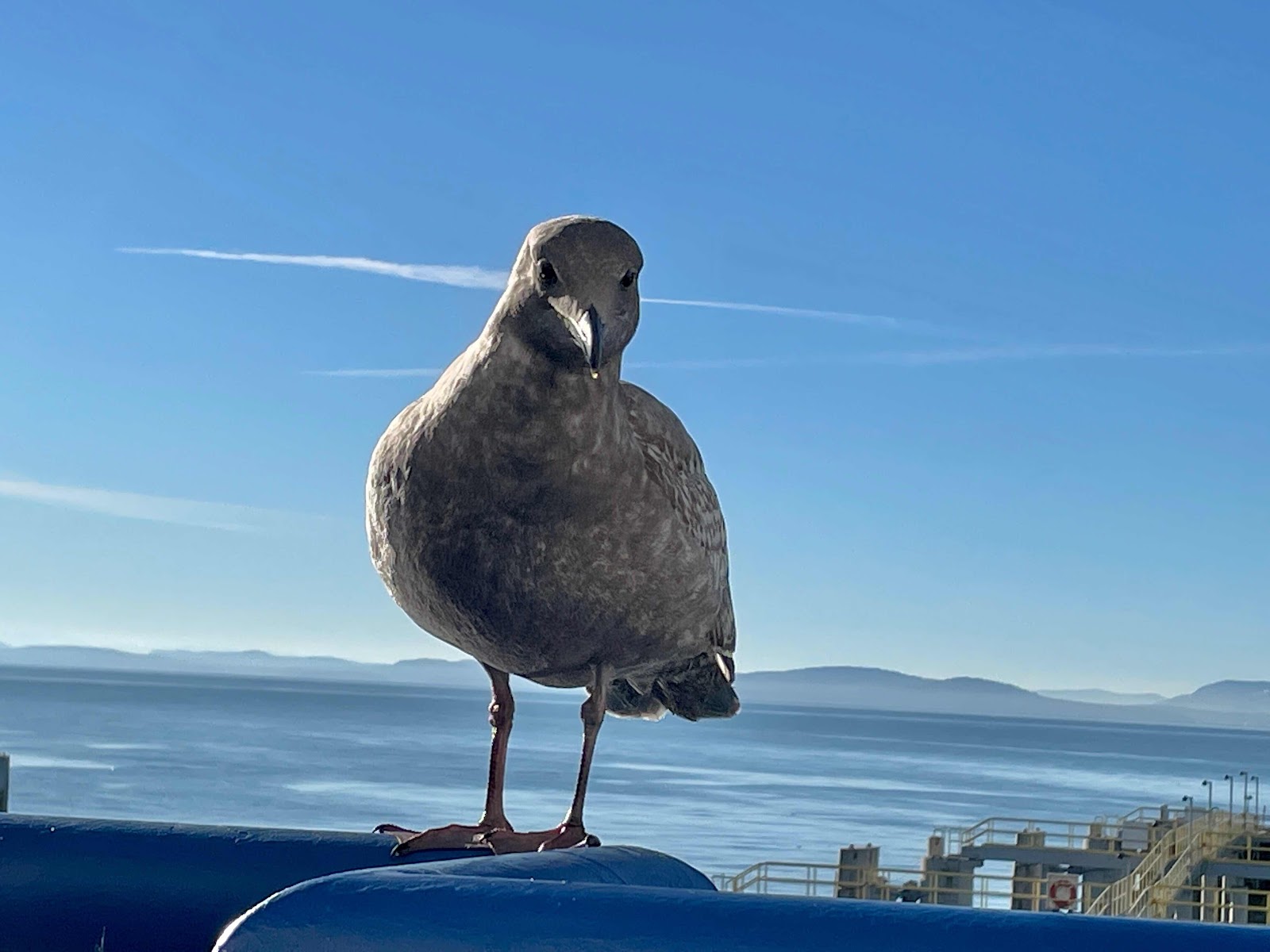 We took a taxi from the airport to the Tsawwassen Ferry Terminal and hung out with the seagulls for about an hour before the Spirit of Vancouver Island arrived. After days of heavy snow, the clouds had disappeared and left us with a perfectly sunny lower mainland day. In fact, my only complaint from the sail over to Vancouver Island was the terrible glare from the sun bouncing off the water. I was quietly longing for a cloudy day, as I would have been able to see more. However, arriving to a bright and sunny day in Vancouver in January is a blessing to be cherished. 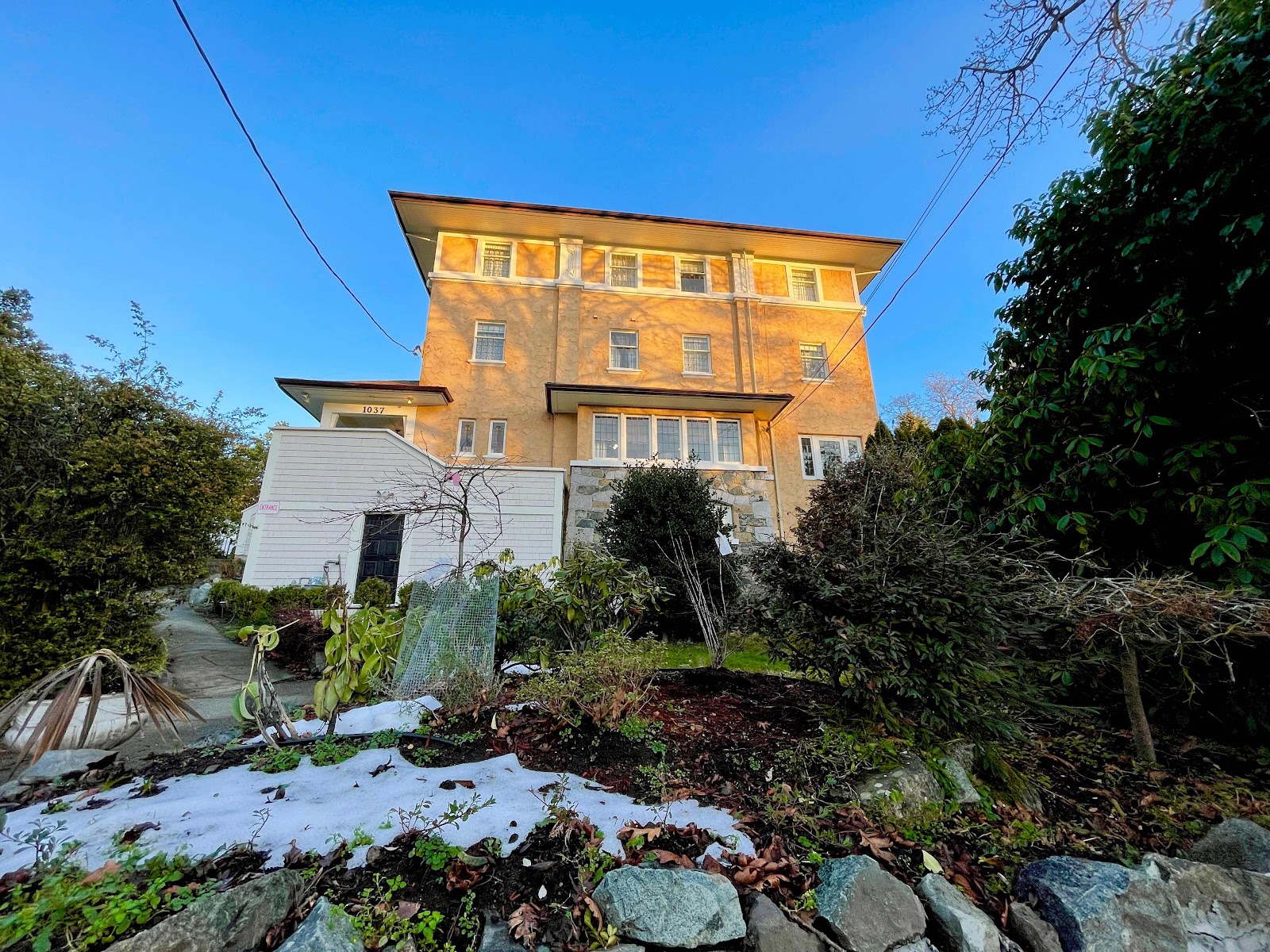 Our original itinerary on the Island was to rent a camper van in Victoria and spend two weeks exploring from north to south. The rental got cancelled last week as the owner had some personal issues that popped up. Heather then booked us in AirBnBs in various locations. Our first stop in Victoria is The Craigmyle, a 108 year old mansion turned boutique hotel. It is right beside Craigdarroch Castle, which we get to look at out of our third floor window. 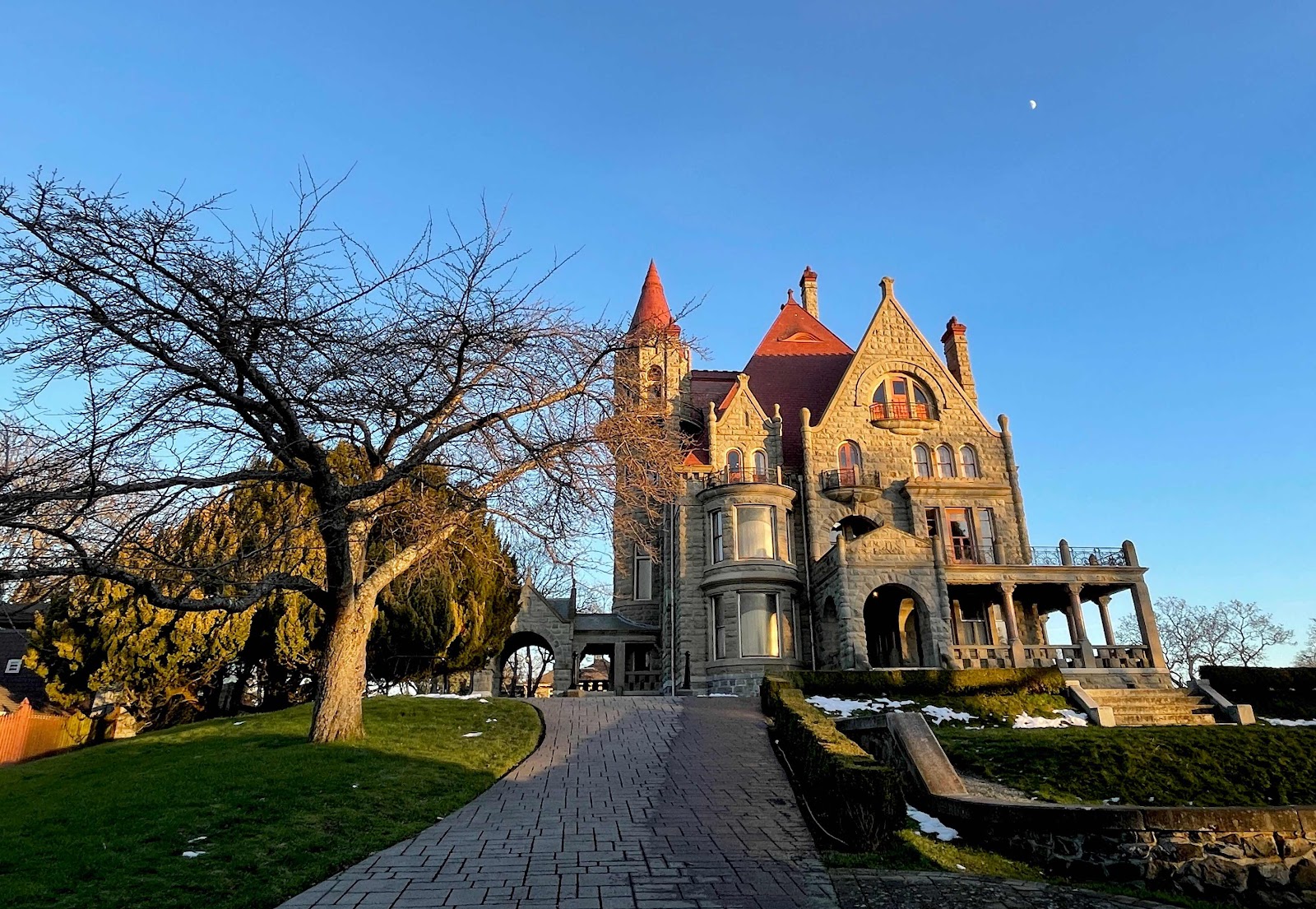 This tiny hotel is lovely, quiet and within walking distance of many points of interest in old downtown Victoria. I’m looking forward to meandering and exploring this historical city. We are also one block away from the Art Gallery of Greater Victoria, which demands a visit.
Our first evening of vacation was a little more expensive than we had planned. Back home in Okotoks, the furnace stopped working for our guests staying in the Artists Loft above Birdsong Studio. Thankfully, our friends Sarah and Pierre were able to troubleshoot the problem and get a furnace repairman out on a Sunday night to warm up the situation for our guests. We are grateful to them for managing the situation. I swear that in three decades of home ownership, plumbing or furnace issues always happen on weekends or holidays, doubling the costs of getting them resolved. I can’t remember a time when something needed fixing on regular time. LOL. 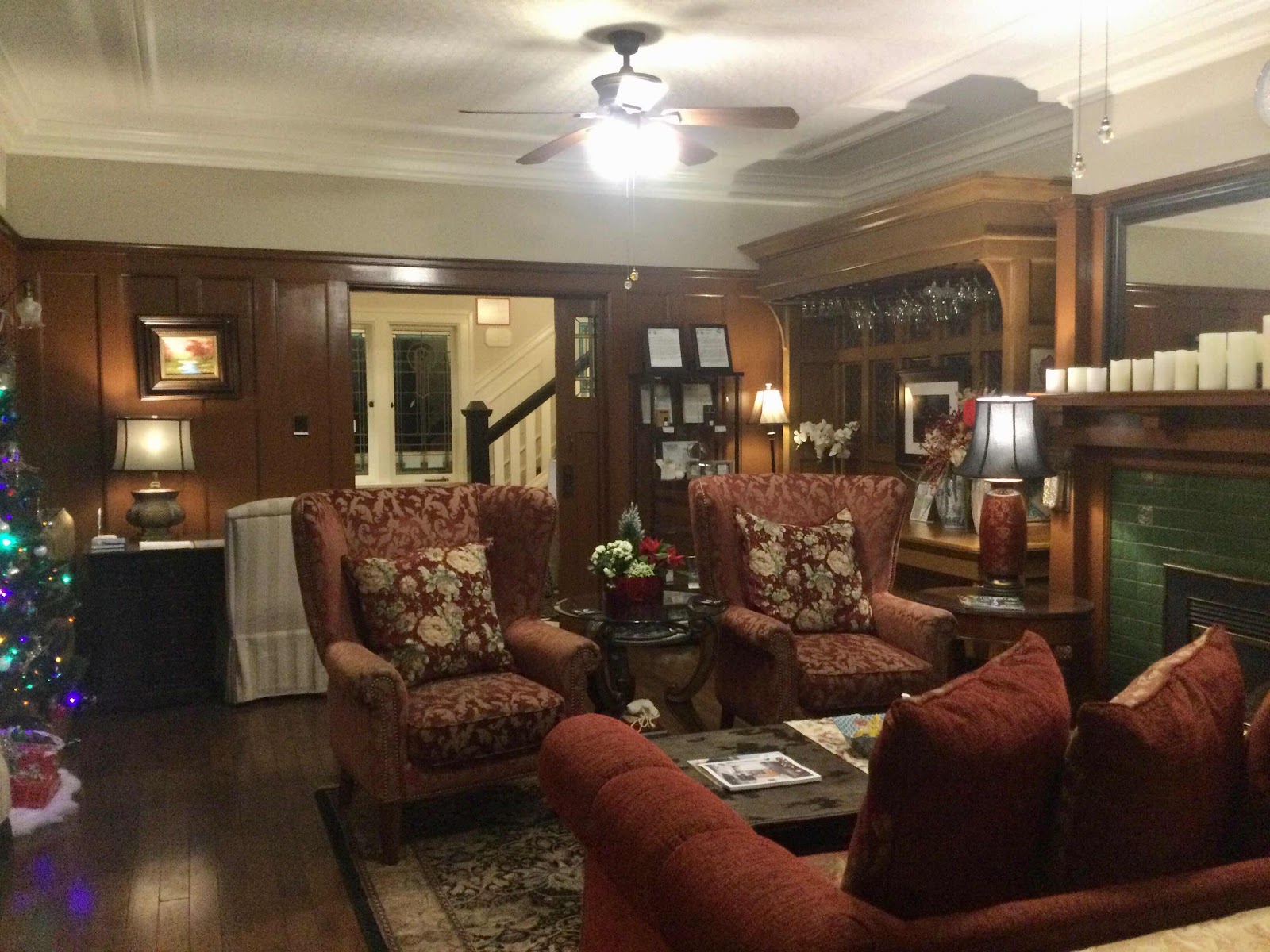 On the table in the silent sitting room of The Craigmyle is a new copy of Guy Vanderhaeghe’s latest novel AUGUST INTO WINTER. 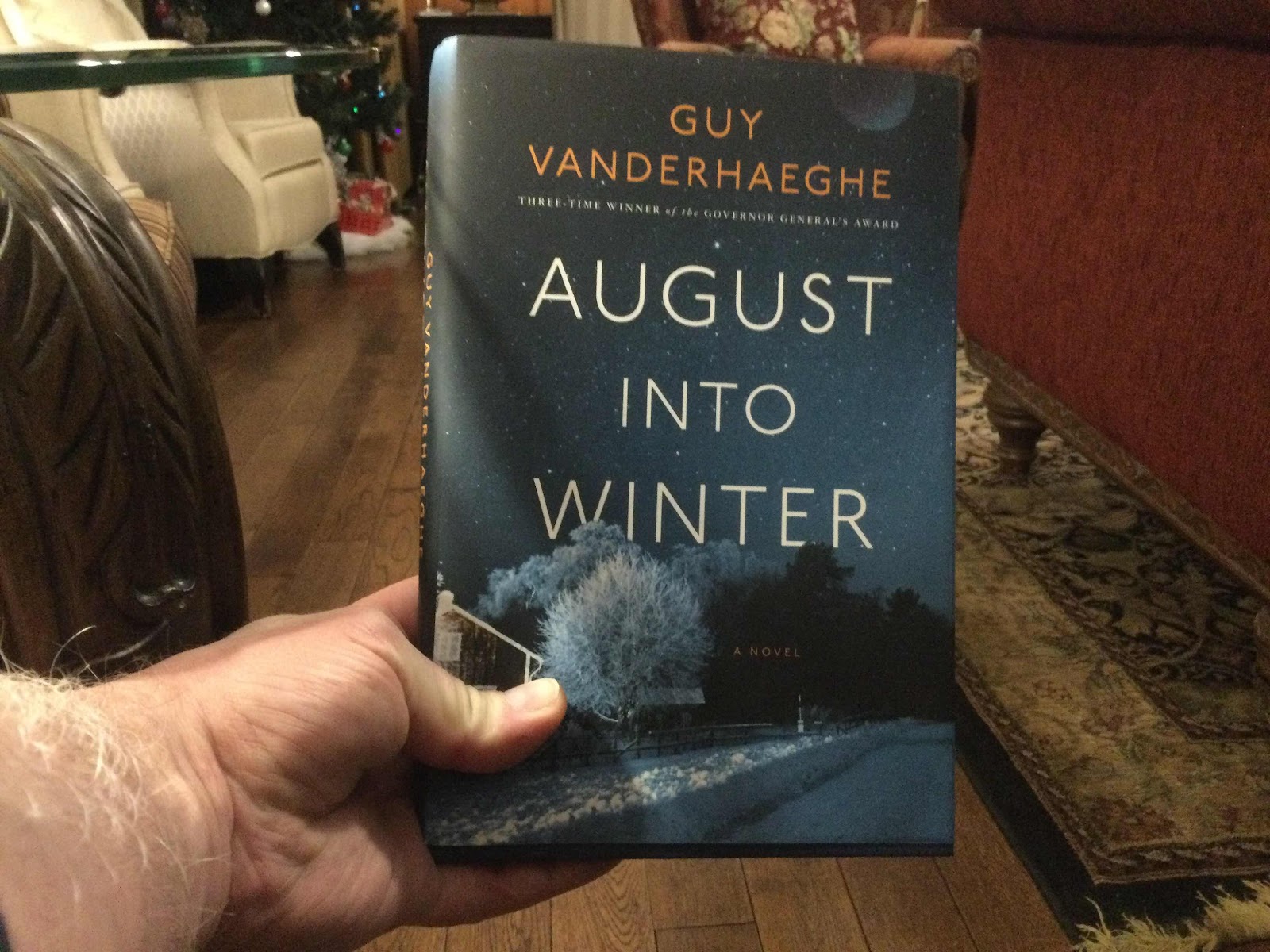 I heard an interview with him talking about it a few weeks ago and it sounded intriguing. Set in east central Saskatchewan in 1939, it is a page turner. It also gives me a glimpse of my part of Saskatchewan at a time when my father would have been a little kid.
Email Post