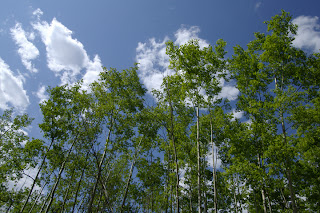 In 16 years of living here, I had never taken any of the historic walks in Abasand, an area of Fort McMurray perched on a plateau between valleys formed by the Clearwater and Horse rivers.  In my mind, the system of rough trails leading to the historic site of the former Abasand Oils Limited facility championed by a pair of American promoters named Max Ball and B.O. Jones, meandered through thick bush and challenging terrain.  I certainly didn't expect a fully maintained road leading right down to the warren of roads and clearings perched along the Horse River.

We left the car on the top and walked down to the bottom, a dusty hike, as things have been pretty dry in recent days, but completely accessible, even to those who might have some mobility issues.  Exposed oil sand deposits are evident on the left side of the road, jutting out of steep cliffs.  Ben jumped across the ditch and with his rubber boots began scaling the face, wanting to grab another sample of black gold, already wearing his plastic gloves to protect his hands from the tarry deposits. 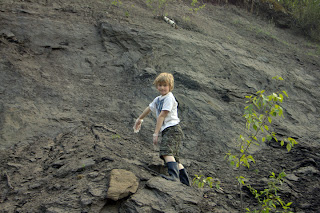 Heather and Ben had joined the cub scouts troupe on this same hike just a few days earlier and were given an excellent historical narrative by Scouter Andrew.  I wish I could have joined in on that adventure as history comes alive when you have a tour guide who knows what they are talking about.

At the bottom of the road is a large open expanse, the site of the original Abasand plant that began producing oil on May 19, 1941.  A fire in November of that year led to a rebuild which expanded the size of the plant and a return to full operations in June 1942.  The feds took over things in 1943, but a disastrous explosion and fire brought things to a permanent halt in 1945. 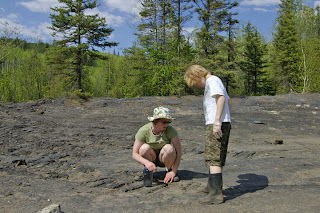 The open spot, several acres in sizes, is comprised of a black surface, soft, almost springy, with little globules of tar bubbling up in the heat of mid-afternoon sun.

"Scouter Andrew was saying that he was once down here on a hot summer day," said Heather.  "He ruined his shoes." 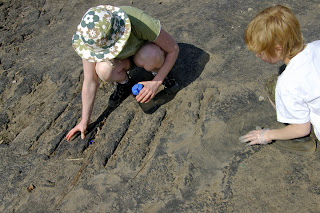 The Horse River loops around the property and is easily accessible in a number of spots.  It's a gorgeous stretch of nature, especially on this bright sunny day with just a few clouds in the sky. 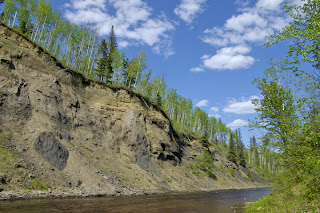 The only troubling thing about this adventure is seeing the level of disrespect and abuse that is heaped upon this historic spot, obviously a favourite bush party location as empty beer cans and bottles have been orphaned by the hundreds around remnants of bonfires.

We walked back to the top wondering what it would take to turn this wonderful asset into a protected area, perhaps a semi-managed historic site. 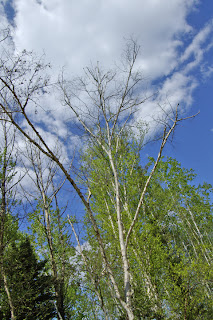 "I don't understand how anyone can toss garbage in the bush willy nilly and feel fine about it," I said to Heather.  "I've never been able to wrap my brain around it."

We'll return soon with garbage bags and spend some time cleaning up at least a portion of the mess, while enjoying what is a great spot to engage with nature and history.
Email Post