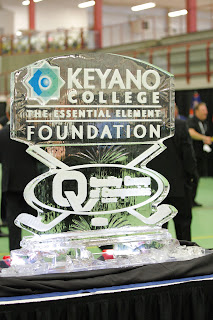 We were escorted to a back stairwell at the Sport and Wellness Centre to meet Wayne Gretzky and his posse of colleagues and protectors, guests of honour at the inaugural One on One Banquet being hosted by the Keyano College Foundation on May 11.  A new addition to its already impressive list of mega fundraising events - Golf Classic, Gala, Curtain Raiser - the banquet with The Great One sold out in less than two days despite the average ticket price being $500.  In fact, single tickets were never made available as the entire inventory of tables were sold to sponsors - over 50 in all - that jumped at the chance to support students through the Huskies Athletics Endowment and meet one of the most revered sports personalities of all time.

The limousine was to arrive around 4:15 pm, at the back of the building so we could usher the stars of the show into the facility unhindered by crowds of guests who had already started to arrive. It would also add an element of surprise and heighten the anticipation if they appeared at only the appointed time.  The plan was well thought out and focused on delivering the best possible experience for the 650 friends of the Foundation who would be in attendance. 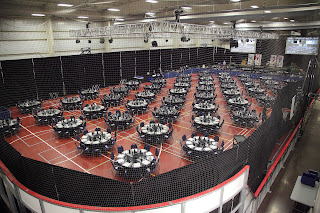 4:15 rolled into 4:30 which quickly became 4:45.  We had no direct connection to the car, or an eye-in-the-sky camera that would tell us if they had run into traffic problems - a rare occurrence in this community (tongue planted firmly in cheek). So we waited.  I read my Twitter feed. Bob and his team of security guards stood on alert, ready to escort the stars through the building to their first stop which would be a visit with some young athletes who had been selected for an afternoon of dry land training with the opportunity to meet Gretz and the gang. 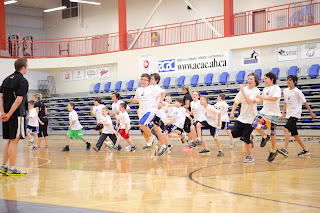 They finally arrived, pouring out of the stretched white limo, into the back stairwell, up the stairs, across the divide that splits the Alberta Building Trades field and Shell field.  They meandered slowly, soaking in the elevated view of the set-up - banquet tables and stage on the right, silent auction and memorabilia collection on the left. 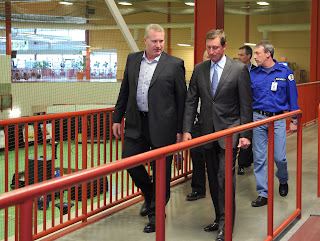 Off in the distance, the double doors of the aerobic studio were propped open, kids assembled, ready to meet a legend that they had likely never seen play, only heard about from their parents and grandparents - much like my generation heard stories of Maurice Richard and Gordie Howe - though I have vague memories of seeing Howe play with the Houston Aeros of the now defunct WHA (World Hockey Association) in the mid 1970s when he was in the late-autumn of his distinguished hockey career. 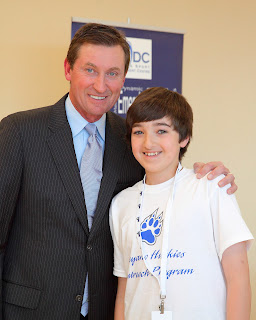 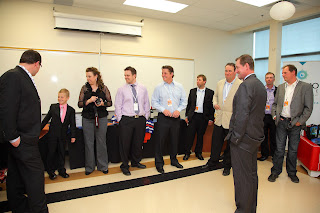 I felt awful because the media scrum that we had planned got cast aside, a victim of a schedule that was at this point 40 minutes behind.  Our media friends, who had been promised a brief few moments with the guest of honour, were left disappointed and forced to settle for pictures that they were able to snap while the entourage visited with the young athletes. 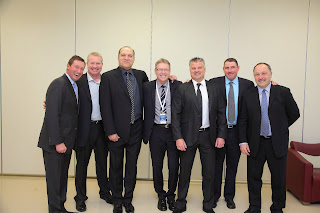 While the VIPs had their private encounters with Gretzky and his friends that included Kelly Chase, Bryan Trottier, Dave Semenko, Marty McSorley, and Darren Langdon, I took the opportunity to tour through the incredible collection of silent auction items.  It was an alluring variety of autographed posters, balls, sticks and myriad other collectibles that were already inspiring bids in the hundreds of dollars. 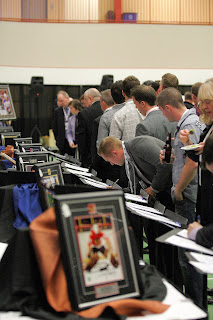 A book on the life of Wayne Gretzky written by John Davidson had been donated to the cause by a fellow that I played basketball and volleyball with in high school and had not seen since 1985.  Now living in Florida, Terry Callaghan saw what we were doing and why we were doing it on Facebook, and offered up this new book for Gretzky to autograph and then sell to raise money for the endowment.  I think that is extraordinary. 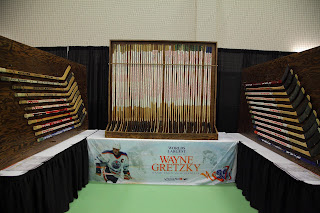 One of the distinct highlights of the One on One Banquet was the chance to view the world's largest collection of Wayne Gretzky game-worn memorabilia owned by local contractor, Keyano alum, and chair of the event's organizing committee, Shawn Chaulk.  He was the brainchild for this athletics endowment fundraiser, getting the idea after sharing his impressive collection of jerseys, sticks, gloves and cups at a similar event in Edmonton the previous year. 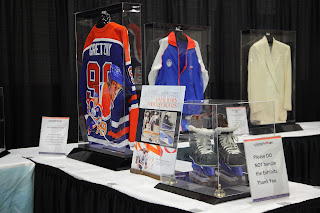 While I was busy browsing, one of the Foundation staff came over to tell me that the media could now have their scrum.  Some had already left, as over an hour had passed, but I managed to find a few lingering around.  Some had tickets to the banquet and were waiting for things to start, and several others had hung back hoping for an opportunity to emerge. 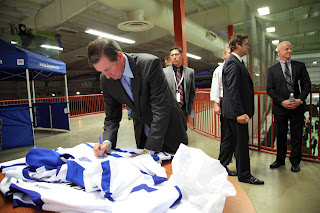 I had a great visit with Darren, the agent/manager, a well-dressed fellow of 40 who looked younger than his years.  He slipped into the business at a young age and now has a stable of aging sports legends that he delivers to speaking engagements around the globe. 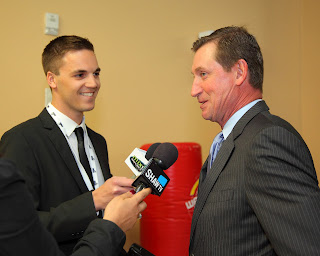 "I like to work with the ones that get it," he said.  "These guys are great to work with. To them, it's all about the fans. Gretzky is among the best."

Based on that conversation and one I had had earlier in the day with one of our local media personalities, other star athletes are not-so-great to work with, and in fact, can be draconian in doing the bare minimum based on the details laid out in their respective contracts.  It was clear, from the very beginning to the very end, that Gretzky gives 100%, and then some, to every engagement that he does.  His Keyano College visit proved that out as he and his guests delivered what one person described as "the best event I have ever attended - bar none." 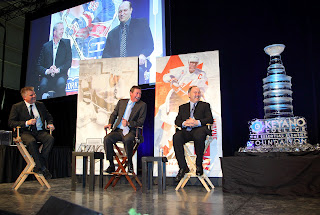 According to Nick Lees of the Edmonton Journal - who was apparently sitting at my table, though we were never formally introduced - "Wayne Gretzky was given a four minute standing ovation," after he was introduced to the room.  You can read Nick's complete account of the evening here. 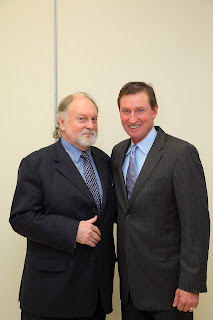 I was also sitting at the table with Keyano College President and CEO Kevin Nagel, who shared tales of his hockey playing days, along with specific memories of having played against several of the guys on the stage during his Regina Pats period a few decades ago.  One of my favourite pictures is of Kevin reminiscing with Bryan Trottier, a WHL contemporary who played with the Lethbridge Broncos at the time and went on to a long and successful career that included several Stanley Cup wins with the New York Islanders. 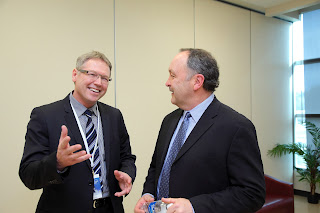 Sitting directly next to me, as we waited for the banquet to begin, was Shawn McClure, the Aboriginal artist who had not only created a stunning soapstone carving of Wayne Gretzky, one of the featured live auction items that sold for $6,750, but also the gifts that were handed out to the special guests at the end of the evening.  As each of the guys held up their carvings representing the animals of our region, gasps of admiration and respect could be heard undulating through the crowd.  This young man has an incredible future. I would encourage you to visit his website at www.deneceltic.com. 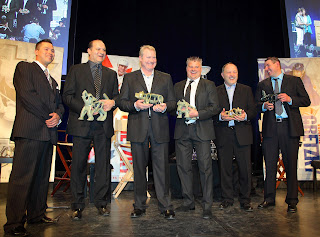 Across the table, just beyond my reach, was Sam Abouhassan - a great friend of many a celebrity and of the Keyano College Foundation.  A distinguished tailor from Edmonton, he has made custom suits for Wayne Gretzky, Premiers Getty and Stelmach, Syncrude presidents, and many others.  An absolute gentleman, Sam exudes class and expressed great enthusiasm for being able to contribute to the One on One Banquet.  His donation of a custom made suit ended up selling for $6,200. 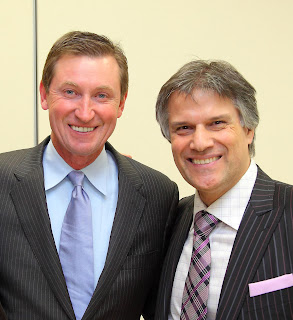 An outstanding meal, prepared by our caterers at Keyano and delivered by many theatre friends of mine who had been enlisted for the endeavour, was followed by some auction action and a hotstove that ended up being the true highlight of the evening. 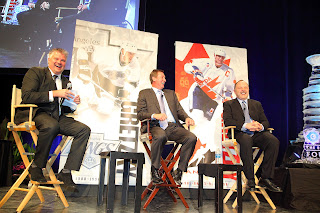 Hosted by Kelly Chase, whose comic talents almost equal his on-ice enforcement skills, the conversation was light, authentic, reflective, and absolutely memorable.  Not the world's biggest sports fan, I still found myself completely entranced by the stories about winning the Stanley Cup and the dreaded trade to L.A. from Edmonton in 1988, along with several profound observations about the great Canadian game of hockey. 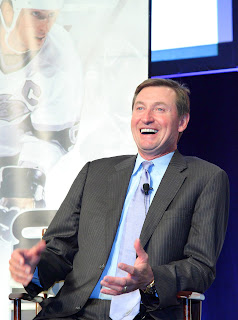 Let me say with certainty that the magic of an event like this doesn't just happen.  There was an incredible amount of forethought and planning that went into its successful execution.  Melane Leblanc and her team, the event's organizing committee, production staff, caterers, servers, and over 100 volunteers took the One on One Banquet from a concept on paper to a runaway sensation.  Smiles were in abundance.  Pictures flooded social media.  Memories were implanted that will be there for all time. 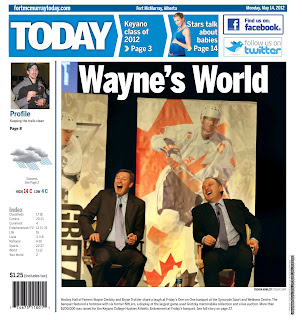 The images that emerged are indelible and many.  They serve to tell a story of excellence, dedication, and determination.  They remind us, once again, that greatness is possible, and that it is worth celebrating and sharing.
Email Post