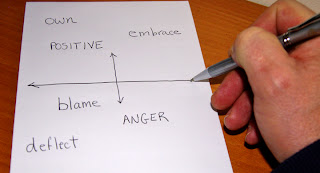 Over the past week or so, we've been working with Mark Bosworth of Kesa, Inc. preparing for a couple of days of strategic planning and team-building at Keyano College.  Mark joined us last year for a similar process and introduced us to a concept called "Leading Above the Line."  It's a simple way of framing our attitudes, behaviors, and actions.

"Above the Line" on my mind, I came home from work the other day, a little tired, perhaps a little on edge, and sat down to relax before dinner.  In the middle of the conversation, Dylan casually mentioned that his notebook computer was no longer charging.

"It's not charging," he repeated.

"Let's go have a look," I said, as we went downstairs into his teenage lair to diagnose the problem.

There was said notebook computer, with the broken $100 power adapter hanging off the machine, plugged into the power bar.

"Where is the original power cord?"

"That's the cord that's been plugged in for days."

I was ready to LOSE MY MIND!  I was on the brink, a moment away from letting loose with both guns blazing, the anxiety rising up through my body as I tried to wrap my brain around how this cord went missing...again.

"Did you take the cord out to your mom's?  Is it at school?"

"I don't know," he replied, as his anxiety began to rise as quickly as mine.

We've been really struggling with getting him to take responsibility for his "stuff" and while this exchange was happening I was thinking of the suggestion I had made to Heather a few days earlier that I needed to do a better job being a mentor, to give him the tools to be better organized.

In the end we found the original power cord in a multi-use shopping bag that had come back from his latest visit to his mom's.  The unit got plugged in and all was right with the world.

"Let's talk about a couple of things," I calmly said.

"First of all, can we both agree that this cord needs to be your number one concern, your best friend?  You need to know where it is at all times."

He shook his head in the affirmative.

"Let's go one step further.  I'd like you to work between now and the end of the week to untangle your cords, and separate them into piles based on what game system to which they belong.  Do you think that is a reasonable challenge?" 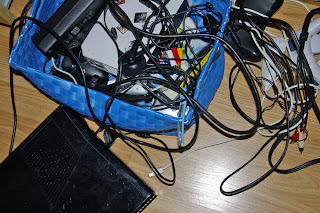 Does this image look familiar: piles of multi-coloured cords, boxes and controllers all tangled together so that when you pick up one piece, everything else comes with it?  Whew! It's an incredibly daunting sight for an anally retentive guy like me.

So, in this case, I took an "Above the Line" approach, remained calm and turned a pressure-filled moment into a teaching opportunity - a missing cord was found, and a long-ignored task was embraced.

Had I taken the "Below the Line" approach this would have been a very different blog post.  It would have been a story of anger, frustration, tears, and regret.  Instead, I'd like to think that together, Dylan and I turned what started out as a negative into a positive.

Now, whether he'll be able to untangle his electronic life, that's a blog post for another day.
Email Post