Three days off felt like an eternity, as the cast and crew of The Farnsworth Invention reconvened for the Wednesday evening run of the show. We had been going so hard, for so long, that being away from the stage, script and each other for several days in a row felt strangely odd.  As we get closer to the closing performance, the feeling of impending separation will become more pronounced - many members of the cast are planning to go on to the next leg of their educational journey at locations across the country. 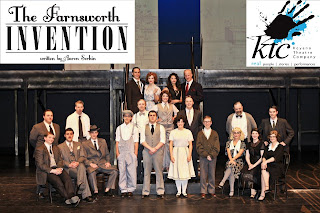 All things being considered, we had a great show last night.  The crowd, among the smallest of the 7-night run, was appreciative and seemed to enjoy the race to invent television.

Sometimes, when you have a few days off, funky things happen like dropped lines, blocking 'adjustments' that appear out of nowhere, and mysterious clunks in the backstage.  None of those things happened last night, apart from one or two small line things.  I think that's illustrative of a couple of things.  First of all, we have run the show enough times that it has descended from the head to the heart.  Secondly, the cast has really gelled into a cohesive unit, generating the necessary energy just by virtue of being with one another.


Bianca Jade and the folks at Shaw TV Fort McMurray released their video piece about the production yesterday.  You'll hear reference to the word 'family' as a way of describing what it feels like to be part of this large group of professional and amateur theatre artists.  It's a great word and it really does feel that way.

Those that come and see the show might find it surprising that despite the enormous quantity of light that gets thrown at us, we can't see the audience.  In certain scenes, I can see shapes and blurred out faces, but I have yet to be able to identify anyone in the soft seats of Keyano Theatre during the run of the show.

Thankfully, each night I know at least one person who has been out there; either they tell me in advance or I'm given other clues.  It was Nicole last night.  I remember hearing Olive's laugh another night.  Derek from TELUS was out one night last week.  For me, it is a motivator to have at least one direct connection to someone in the audience.  Tonight will be particularly interesting as Heather, Dylan and Ben will be out there, in the fuzziness, in the seats above the cross aisle.

There is so much to be said for routine and ritual as part of being a successful actor.  Professionals will go through a methodical process of getting ready for a performance, whether it is their first or five hundredth.  They do a thoughtful and thorough vocal and physical warm-up; they check all their props and pre-sets; they walk the set to ensure that nothing has changed; they do everything it takes to be ready for that "places" call.

We all come in around 6 pm - two hours before curtain.  I always start by grabbing my two main props: my cigar and my Zippo lighter - without them I feel completely naked. My process continues with putting on my scant amount of make-up, pants, shoes and undershirt.  At 6:40 we are given the deck for 30 minutes to warm-up.  I pre-set a few costume pieces and wander the set running through my various lines and speeches, warming up my voice for the vocal onslaught that is ahead.  My hair (all three of them) get coloured at about 7:10 pm; shortly after my body microphone is installed.  As Steph (the SM) flies by with our 30-minute call, I finish the dressing process putting on my dress shirt and tie.  The jacket goes on at our 15-minute call. As 10 minutes to curtain I go backstage left and nestled into my places location, tapping into the energy and anticipation of the audience.

Every single one of us has a different pattern, habit, routine that we follow.  Some like to blast music in their dressing room to get in the zone.  Others chill while surfing the Internet on their iPad.  Some like to be alone, others like to socialize.  All of us want to be there; of that, I have no doubt.  That desire to be in a place, in a moment - together as a single ensemble of theatre artists - speaks volumes to what happens when the house lights go out and we move a few steps in the dark to our opening positions.
Email Post