Unaccustomed to having time on my hands, I began to get fidgety yesterday afternoon, mid-way through a long weekend.  So, despite the pelting rain, I threw on a coat, got into the Escape and made a beeline to Chow's Varieties to grab my minnows.  Rain or no rain, time on my hands meant a fishing opportunity.

It's a little more difficult to get to our spot on the Athabasca River these days, as the left turn that used to be in place before the start of road construction has long since vanished, replaced with an impenetrable concrete wall.  Now, we have to drive all the way up Thickwood Boulevard just to flip around and get on the right side of the Highway 63 to turn down the water treatment plant road.

Going down the hill past the water reservoir to Fisherman's Beach (not a real name by the way, just one that I made up) is a little dicey in the pouring rain, and while I started sliding a little bit, I made it safely to the bottom with no problem.  I backed up and got my rear end as close to the water as possible so I could stay relatively dry under the elevated hatch.

The tip of my rod began dancing almost immediately as unseen goldeye began sampling the merchandise.  They are a little tricky to catch as their mouths are pretty small and they tend to only nibble.  Once in awhile they gobble up the minnow is just the right way allowing the hook to find a spot that sticks and I reel it in.  After catching and releasing two small ones, waiting for another to come along with hands firmly embedded in my jacket pockets to keep warm, I woke up to the fact that something wasn't quite right.

My ring finger felt odd, slightly numb and tingly.  I pulled it out of the warm embrace of the pocket and discovered that it was several shades of blue and quite a bit larger than its brother on the other hand.  I tried to remove my wedding ring but to no avail as the swelling was too pronounced.

My brain tried to process what was happening and the only thought I could come up with was that I needed to pack up, get home and think about heading over to the hospital.  For some random, unexplained reason, my finger had either been injured, infected or bitten by something.

I raced home, darted into the bathroom to both wash up and warm up the finger, as it was laden with fish scales.  Lathered up with soap, I was thankfully able to slip the ring off and head over to the emergency room.  By this point, both of the inside joints were a blueish purple and throbbing - so I felt justified in getting in the line-up to see a doctor.

The triage nurse was very understanding and offered me a warm blanket to see if some sustained heat would help reduce the swelling.  By the time the emerg doc saw me an hour later, things had improved to the point that I was ready to make my escape and head home.  I'm glad I stayed though, if only to get his opinion and a prescription for an antibiotic in case it turned out to be an infection. 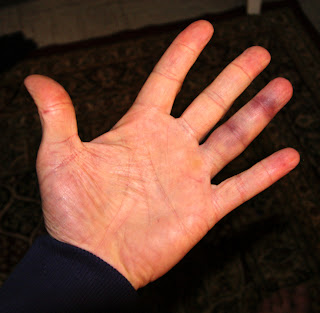 I'm still at a loss as to what happened.  In my panic, I had flashes of thought about what it would be like to lose that digit.  Typing would be a bit more challenging as that finger manages the letters S, W, X and the number 2.

This morning, said finger is still a little off colour, though less so than it was yesterday.  I still can't bend it enough to touch my palm and it is still too swollen to return the wedding to its rightful place.  A part of me wonders if I injured it by gripping on to my rod too hard?  Get your mind out of the gutter.....gripping my fishing rod too hard.  Outside of a mysterious spider bite or getting poked by a goldeye fin, I can't imagine what else might have happened.

Fodder for an episode of House, I think not, but a digit dilemma worth writing home about.
Email Post