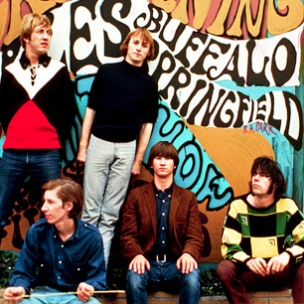 "There's something happening here," sang the members of Buffalo Springfield when they recorded For What It's Worth on December 5, 1966.

"What it is ain't exactly clear," they continued.

That lyric kept repeating itself in my mind as a third candidate under 30 (though I'm completely guessing on their ages) announced his intention to run in the municipal by-election on June 25th in Fort McMurray.  That is not to suggest for a moment that candidates of the younger variety have not run in the past; they absolutely have.  Ross Jacobs, as an example, has run several times.  But let's face it, the predominant number of names on the ballot belonged to the 40+ crown, of which I am a proud member.

James Anthony - radio personality and entrepreneur (www.everythingfortmac.com and Epic Productions) - has declared his plan to fill out a nomination form and join the three previously announced folks on the ballot vying for two seat around the Council horseshoe vacated by our new MLAs Don Scott and Mike Allen.

I keep hearing rumours of candidates-yet-to-be-announced, many of whom are in the "younger than me" category. Let me state categorically that the possibility that Sheldon Germain and I would no longer be the "young ones" on Council is one that excites me greatly.  In a community where the average age is 32, there is no question that we need representation for that group.

I'm trying to figure out what has changed or what has happened to inspire this renewed level of engagement in the political realm.  I think of Theresa Wells and the difference that she has made through her McMurray Musings blog.  I think of the YMM Podcast and the night that everyone tuned in to a live streamed conversation about Highway 63.  I think of the role that social media has played in inspiring discussion and debate about the hot topics of the day.  I think of Arab Spring and the young people who created revolution and change in countries where those two things were thought to be impossible.  Perhaps some or all of these things have contributed to the surge of younger candidates.

To be honest, I'm looking forward to the anticipated forum, Chamber Talking Stick and video interviews because the people who have declared so far are all excellent.  Christine Burton, Tyran Ault, Matt Youens, and James Anthony are respected, informed and passionate community leaders - each in their own unique way.  They-who-shall-not-be-named (yet) also promise to be tremendously strong candidates. 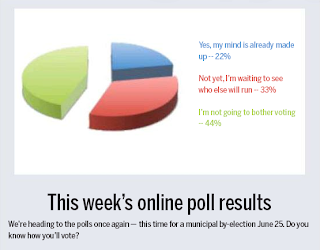 My fear, and that of many of my colleagues on Council, is that voter turnout is going to be dismal.  A recent unscientific poll conducted by one of our local media outlets suggested a higher than normal level of apathy about this by-election.  Happening hot on the heels of a provincial election campaign that inundated our lives (and our home phones thanks to the pollsters and politicians) for a series of weeks that seemed to go on forever, I can understand the reticence.  However, let me be absolutely clear - this is going to be an IMPORTANT vote.

In the almost two years since we were elected, this group of civic leaders, with tremendous municipal staff and leadership, has been effective.  Who you select to replace Mr. Scott and Mr. Allen is critically important to the future of this region.  Taking it lightly, or ignoring the inherent responsibility that you have to participate in the public process of civic leader selection, really shouldn't be an option.  We need you to participate fully and encourage everyone in your sphere of influence to do the same.  It matters.  Your vote is vital.
Email Post