Thanks for the memories

After the lights have gone off, the set dismantled and the costumes packed away, all we are left with of The Farnsworth Invention are memories...and pictures.  For over a decade Photomagic in the River City Centre has been donating their photographic services to capture the magic of live theatre at Keyano College.  From a participant's point of view, I can't thank them enough, because years from now these images (located here if you'd like to look at them) will be all that are left, apart from whispers of almost forgotten lines, faces and voices.

I thought it would be fun to pick five (out of the hundreds) that rise to the top for me.  I'm certain that every single cast member would pick a different set of five, based on the moments that mattered to them, and their unique positions within each of the scenes.  But here are mine...in no particular order. 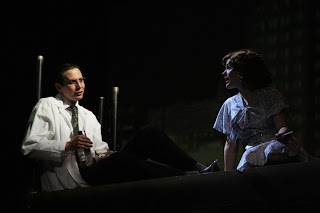 "Mathematics is what music does on a Saturday night."  It's one of my favourite lines from the play and certainly, one of the most lovely moments as Farnsworth (played by Michael Beamish) contemplates failure "with a glass and a bottle of Bushmills".  Pem (played by Elaine Bevans) looks radiant in the blue light of the distant moon. 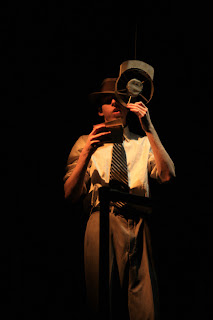 "Handy Hand Saws, 24 inches: Two-dollars, thirty-five cents.." said the radio announcer (played by Anthony Wall) as he droned on with "ten minutes of information about a hardware store." I love this photo and I don't think I'll ever forget the deadpan delivery of A-Wall. 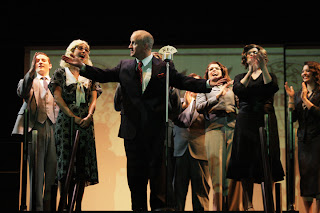 "Radio stations should be run like public libraries," declares David Sarnoff at the height of RCA's success.  It was a great moment in the show, and it's so cool to see the animated expressions on everyone's faces in the scene. 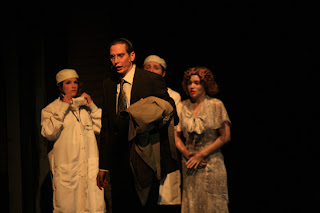 One of the emotional threads for me was the death of Farnsworth's son Kenny. This is a gorgeous shot of a scene I didn't get to see.  The look of terror in his eyes is haunting. Powerful. 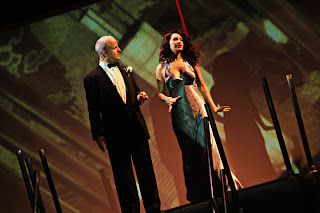 I couldn't leave this one out of the top five as it will always remind me of how fun it was to work with Humberly Gonzales in the role of Mrs. Lizette Sarnoff.  Apparently, one night she almost had a wardrobe malfunction wearing this stunning dress.  Thankfully, David Oulton, playing the page, arrived just in time with a coat.

So, three cheers for memory, and the incredible gift of digital photography and its ability to capture rich, authentic, and artistic images of the live theatre experience.  Photomagic has been a great friend to hundreds of actors, designers and directors over the years.  We can't thank you enough. 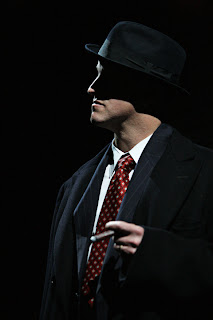 Not part of the top five, but worthy of an honourable mention.  This photo from my scene with Pem Farnsworth is absolutely intriguing.  My father-in-law thinks I need to print this one out and get it framed. I might just do that as I look perfectly sinister.
Email Post