It is a good feeling when you can look back on a day at the office and be able to say that it was "the best day!"  We had one of those on Thursday as the Keyano College faculty and staff gathered for our second full day of strategic planning and team-building.

We started the day being divided into random teams, 16 in total, made up of about ten people from different departments throughout the college.  There was a concerted effort to ensure that we didn't end up in a group with the same old gang.  Shaking it up was key to the success of the day.

Standing behind tables that stretched from one end of the gymnasium to the other, about 200 of us listened intently to instructions for a series of minute-to-win-it challenges. 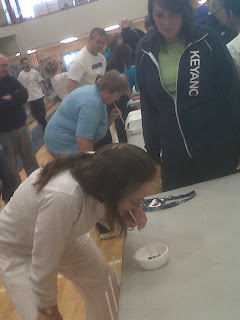 Organized hilarity followed as we blew Styrofoam cups off a table using the air from a balloon, sucked up M+Ms and transferred them to straws taped up vertically on the edge of a table (see pic above), retrieved pennies from the legs of pantyhose, and tried to balance three golf balls on top of one another.

One of the organizers had predicted that people would be disappointed when this phase of the day was over and they were exactly right.  The sense of fun and friendly competition was inebriating, infectious - we just wanted it to go on and on, smiles and positive energy flooded the space.

We followed up the exuberant physical fun with some activity for the grey matter between our ears. Facilitator Mark Bosworth from Kesa, Inc. playing a TEDx video about change by Nate Jarvis.


What was most exciting was the small group conversations that erupted in the Recital Theatre about what we took from that short presentation.  I was sitting next to a bunch from the Sport and Wellness department and we launched into a rich conversation about how we can lead "Above the Line."  The content in the video was a catalyst for great ideas about our own organization, its challenges and opportunities.  Seeing a full theatre of about 200 colleagues animatedly engaged in deep and meaningful dialogue about our passion for what we do every day was amazing.

Probably the most powerful moment of the two days was when Margo Vermillion, Chair of our Fort Chipewyan Campus, rose to share the observation of the values reminder that we have staring at us everywhere we turn.

"The word Keyano - which she said in three distinct syllables: key AN oh - means in our Cree language yours, mine (as she gestured to her heart) and ours (as she spread her welcoming arms)," said Margo.  Reverential silence was followed by tumultuous applause as she had eloquently distilled everything we had been talking about down into three incredible syllables that form the name of our school - a reminder of the "Above the Line" approach we strive to take in everything we do.

Time to break bread together, we gathered in the front park, as the day proved lovely enough to enjoy a barbecue and some fresh air fellowship.  There was a slight mix up in terms of time, which gave us another great opportunity to meet some more of our colleagues while standing in line waiting for the food to arrive.

I particularly enjoyed visiting with a young instructor in our academic upgrading area.  Originally from Newfoundland, she is starting to get the hang of Fort McMurray.  She just wishes there were more things to do.

"Can I dig into that comment a little bit?" I asked.  "Because as a family guy who is also a politician, I have the exact opposite feeling - that there is too much to do.  I can't keep up."

"I guess I just mean that I hate having to go all the way to Edmonton to do my shopping.  You have much smaller cities in other parts of the province that have way more options that we do."

It was a fair observation and a concern that we hear (and feel) often.  I'm glad that I can say that that will change.  More offerings, more amenities are on the way.  With new neighborhoods, the city centre revitalization, and additional lands coming on stream, we should be in a position to give our citizens the shopping experiences they long for right here at home within the next couple of years.  We'll also be able to keep more of those precious dollars in our local economy which is equally important to the feeling of satisfaction you'll get when you're a five minute drive from a major power centre (big box stores).

Had we not been standing in line at the team-building experience, I would likely have not had this great conversation with this colleague.

Teams intact from the morning -- my team being Team #12 THE BOB TEAM - The times they are a changin' -- we returned to the Sport and Wellness Centre for a fun volleyball tournament.  Eight courts had been set-up to allow the 16 teams to rotate every ten minutes.  And apart from a couple of sprains and an unfortunate dive that required a call to 9-1-1, it was an amazing 90 minutes of fun and physical activity in that post-lunch period that is often the most difficult during these strategic planning days.

"That was the most fun I've had in a year," enthused Dr. Nagel as we closed out the day back in the Recital Theatre, sweat rolling off the brows of many of us.

I finished up some things back at the office, drove home to the other end of Franklin Avenue, walked in the door and said hello to my wife Heather.

"How was your day?" she asked.

"That was the BEST day," I said without hesitation.  It tumbled out of me, without hesitation or forethought, but captured it perfectly.  No other set of words could come close to describing what had been a most incredible day at work.
Email Post