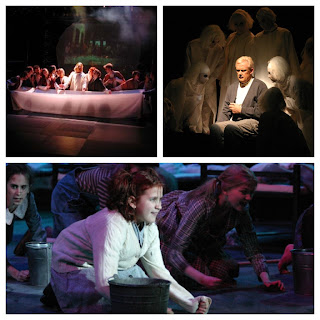 It was great to see the smiling face of Paul Gelineau in the lobby of Keyano Theatre last night, welcoming a huge contingent of local media representatives and bloggers for the Extremities media call.  Paul spent nine years as Artistic Director of the company, producing an impressive body of work that includes some of my favourite theatrical productions of all time, among them Jesus Christ Superstar (2001), Strangers Among Us (2003) and Annie (2005).

"Bizarre," is what it feels like for him to be back after about five years.  "The community has changed a lot; it continues to change."

I'm sure Paul was marveling at the crowd we had for media call, a special session to give reporters and writers a sneak preview of the show and an opportunity to interview some of the cast members and the artistic team.  When I served as publicist (1999-2006), we only had a couple of media outlets that expressed an interest in what we were doing and blogging was still in its formative stage. 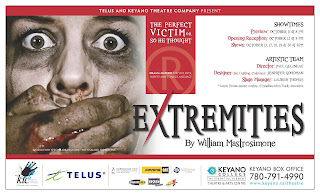 Extremities by William Mastrosimone is an exploration of victimization and abuse against women and according Mr. Gelineau, "the audience is not going to leave this untouched."

"Some aspects (of this show) are going to be hard to watch," he said, "though none of it is done gratuitously."

Michelle Thorne, a local actress who came through the Keyano College drama program before going on to the University of Lethbridge, is playing Marjorie and concurs with her director that this show promises to take you to the edge and dangle you upside down.

"This is the most challenging role I've ever had," she said.  "Come in with an open mind as this production takes us to some deep dark places. It's been a journey with some difficult times and a lot of self-discovery. It's been great working with these brave performers.  Acting is not an activity done alone - every action requires a reaction.  We have developed a lot of trust as an ensemble. It's an incredible group."

It's been fun watching Michelle mature and grow as a performer.  We worked together in Romeo and Juliet in 2002 when she was just getting started on her educational journey.  Nathan Loitz, who plays Raul, was also in that show.  A decade along and both performers are biting into a substantial piece of theatre along with Misty Oakes - playing Patricia, and Rhiannon Eldridge - playing Terry. 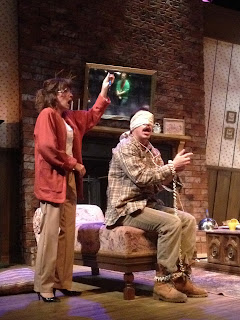 I asked Paul from the actor's perspective, if you could do a show like this without diving down into some perilous personal territory?  In other words, could you fake it?

"No," he said immediately, "not the way I work. This is a tight ensemble who are working really hard dealing with this kind of material.  We are trying to make the story real."

We were treated to a short scene from the show which you can preview here, courtesy of Jerry Neville from Country 93.3.  There is also an excellent preview piece in the October 11th edition of  Fort McMurray Today written by Amanda Richardson.

"The set is amazing," said Artistic Director Claude Giroux when I talked to him on the weekend.  "I think it's the best we've put on the stage during my entire time in Fort McMurray." 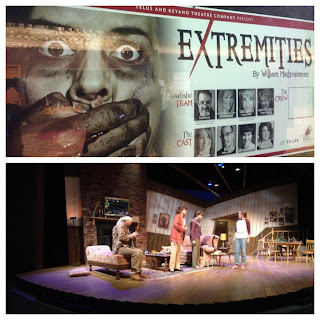 Designed by Jennifer Goodman, the raked (angled) floor collides with skewed door frames and striking lines to create an unsettling backdrop for shocking sexual violence, a startling power shift, and a stark, dramatic look at victimization. 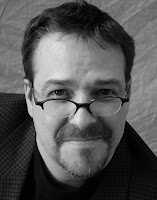 Director's Notes
This is a very difficult play to do, and at times a difficult play to watch.  Violence against women is a devastating occurrence and sadly continues to challenge our society every day.  In this production we hope to bring to light the emotional, intellectual and societal challenges surrounding female victimization, and how some how to cope.  This is not a work of fiction, it is a study in how a victim is created, how it changes them and what some do to survive.
We do not have to look far in our media to see how hard it is for a victim to go public about rape and/or sexual abuse.  Their lives are often pulled apart again, analyzed and they are sometimes victimized again publicly for speaking out.
This is a story about empowerment.
This is a story about how three women survive and are changed forever.
This is a story to help us challenge the issues openly.
This is a story about fighting back.
~ Paul Gelineau

Some of my best memories from Keyano Theatre came out of the mind and soul of Paul Gelineau - the last supper scene in JCS, the ghosts in Strangers, the "Hard Knock Life" dance sequence from Annie - I'm beyond excited to add a new memory to the theatrical treasure chest when Extremities opens on Friday night.
Email Post