I think you need to be mentally prepared to "enjoy" Keyano Theatre Company's production of Extremities.  I fear that if you come to this show expecting to be "entertained" in the traditional sense, you might emerge at the end of act two shell-shocked and a little unsure about how to answer the requisite question that is going to get asked: Did you enjoy the show?

I asked that very same question to one person after the opening last night and God bless him, he didn't pull any punches.

"I didn't," he said, looking a little dazed and relieved that he was able to vocalize his honest response rather than pulling a sugar-coated answer out of his back pocket.

Let's face it, you have to be in a certain head space to process and "enjoy" the heady and horrifying content of Extremities, written by William Mastrisimone. Not giving anything away, you'll need to be ready to see some stage violence.  Director Paul Gelineau, also one of leading fight choreographers in the country, reunited with two of his former students to craft a startling sequence that is explosive, evocative and layered with shocking moments, some nudity and extreme language that might make you squirm in your seat.

"I'm not sure how this is going to come out," I said to someone at the post-show reception catered by our good friends at the Sawridge Inn & Conference Centre, "but I thought it was tastefully done."  Mr. Gelineau was right when he said that it is disturbing but not gratuitous.

More disturbing to me than the sex and violence was the game of cat and mouse that followed, set to the haunting sounds of "Found a peanut, found a peanut" and the maniacal characterization of Raul by Nathan Loitz.  Equally troubling was the descent of the lead female character - Marjorie, portrayed by Michelle Thorne - as the hunted transforms into the hunter. Both Nathan and Michelle ascend to new heights with these powerful roles.

"I'm here because of you," said Nathan to his high school drama teacher, Pam Shiels, as they reunited after the opening night performance, the meaning and import of having seized this opportunity not lost on anyone within earshot.

Rhiannon Eldridge plays Terry, the first of the roommates to return home following the assault and counter assault. In one moment mousy, the next assertive, Rhiannon embraced a substantial role and delivered the goods to an appreciative opening night audience that rose to its feet as the closing credits appeared on the back wall of the Jennifer Goodman designed set.

"You were absolutely outstanding," I said to Misty Oakes, who played Patricia, the second roommate in the game and the voice-of-reason counterpoint to the violated and violent Marjorie, as she arrived at the post-show reception. 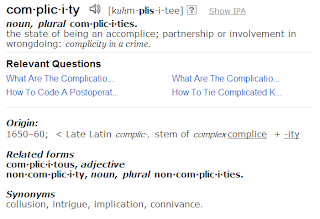 One of the words that jumped out at me from the show was "complicity", whether it be real or perceived.  How complicit was coach Joe Paterno in the actions of his assistant Jerry Sandusky is a very different question than how he, himself, perceived his complicity.  In the case of Patricia and Terry in Extremities, their misaligned understanding of what is and isn't complicit, drives their actions and enables the story to come to a mind-blowing conclusion.

Certainly one of the dark questions that Extremities explores is what constitutes provable rape. Also, what happens when you've been physically or sexually violated and successful prosecution is not a certainty? How do you respond?  What do you do to take back your life?  How far are you willing to go?

Not everyone is going to "enjoy" this production, and that's OK.  Ten years ago yesterday, on our wedding day, my wife Heather shared with me that the first time she saw me was months before we went on our blind date.  She had seen me on stage at Keyano Theatre playing Biff in a 150-minute production of Death of a Salesman.  In no mood to sit through that dark and dreary tragedy, she confessed that she actually walked out at the intermission.  That was OK, too.  She still married me.

Last night, she was fully prepared to enjoy "Extremities" and in fact, was blown away by the time the intermission arrived.

The show was so gripping, so all-consuming, that she had lost all connection to the passing of time.  That's a helluva compliment to the work that went into Extremities and a clear indication that you should try to see it before it closes next Saturday.
Email Post