The Vinyl Cafe with Stuart McLean

We saw Stuart McLean in the flesh yesterday, performing his touring rendition of The Vinyl Cafe at Keyano Theatre.  Our family has literally spent hours listening to this Canadian icon, the podcast edition of the show being our go-to spoken word selection when listening to music becomes tiresome on long trips.  All of a sudden, there he was in person, cup in hand, thin, grey on the top, older than I thought he'd look - from a distance anyway.

He started off with that story of stories, the one that has brought us from chortle to guffaw on more than one occasion traveling through this great country - The Water Slide. It was as delightful as it was surprising to watch the role that his body plays in telling the story.  We don't see that on radio.  His hands move back back and forth - physical punctuation marks - at times, grabbing the words from some unseen place and delivering them to his mouth, positioned perfectly in the microphone's sweet spot. His legs - his whole body really - get into the action, twisting, contorting, dancing with the words.

In my mind, the Dave and Morley stories were delivered sitting down, script in hand, microphone at the ready.  In truth, the stories - two of which were new - were performances that leveraged all his faculties, including devices like nuance, pause, and audience participation that made them absolutely pop!

"In a theatre full of people, he made it seem like we were in an intimate living room," said one patron.  "The sound quality and volume were absolutely perfect. What a great venue." 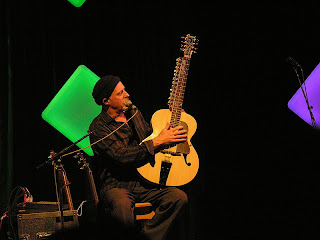 Harry Manx was the surprise musical guest, a revered artist who introduced us to an incredible Indian instrument called the mohan veena. Born on the Isle of Man, Manx now calls Saltspring Island home, though he spent five years in a student-master relationship with Vishwa Mohan Bhatt learning this 23-string guitar.  It was haunting, resonant, mysterious and beautiful, all at the same time.

All of us were enchanted by the music of John Sheard on piano as he filled in some of the audience interaction bits with delightful melodies - whatever popped into his head, often distracting Stuart with his creative choices.  We were blown away by his composition that weaved together dozens of movie themes.  Familiar melodies zoomed by from movies like Gone With the Wind, The Godfather, Star Wars and many others as his hands floated and flew above the keys. I never thought to count, but several did, and threw out their guesses as to the total number of films represented.  Someone actually got it right when they yelled out "33".

Three Dave and Morley stories, some great music, lots of audience interaction, an evening with Stuart McLean turned out to be a three hour delight and more value for my entertainment dollar than I think I've ever experienced.

"I'd see him again tomorrow if I had the chance," said Heather, offering her unfettered endorsement of the live version of The Vinyl Cafe.

We left the theatre, darted into the parking lot, and saw something that Stuart never gets to see - people trying to find their cars, arms laden with Vinyl Cafe merchandise, smiling, laughing and joyfully engaging with one another. 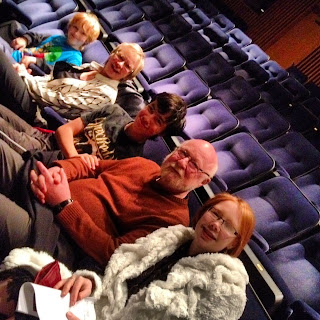 To Dennis Pendrith on bass, John Sheard on piano and keyboard; to musical guest Harry Manx; to the entire crew; and to Stuart McLean - thanks for an unforgettable experience.  And thanks to my mom back in Saskatchewan who treated us to this very special night.
Email Post