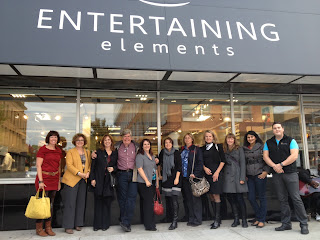 Nancy was pretty insistent that our group dinner on Tuesday night was going to be special. I could see it in her eyes as she talked about it. She was absolutely bang on!

Located in a store that hasn't even opened yet - Entertaining Elements - Dinner with the Chef is only one of the attractions of this unique establishment in the heart of downtown Kitchener that also includes a quality cookware retail section and the Wine Sommelier (wine steward) Room. 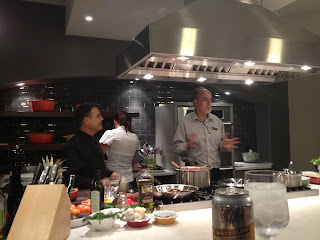 The evening began with owner Merv Schwantz welcoming the group of 13 of us from Fort McMurray, Calgary, Edmonton and Waterloo as we sat around the culinary bar, a ringside view of the kitchen where the preparation magic would happen.  Our chef for the evening was introduced and we embarked on a dining adventure that lasted almost four full hours. 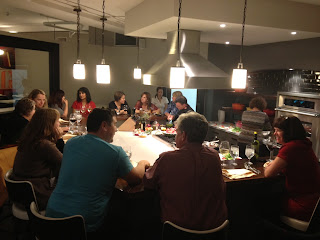 Chef Sam, originally from the Kitchener-Waterloo area, pulled up stakes awhile ago and began traveling, exploring the nature of food and food production in countries throughout Central America.  By that time, he had opened and closed a number of restaurants here in Canada and was ready for disruptive change.  He ended up in places where you truly had to rely on what was available on a local basis, from backyard gardens to hand-raised animals.  The result, as he returned to Canada to be closer to family, was a renewed commitment to focus on  providing food experiences that are rooted in organic produce and meats, and culinary simplicity. 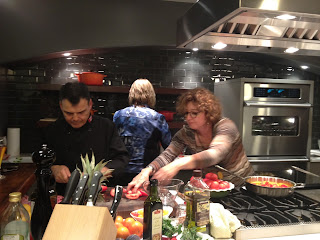 From fresh bread made from organic flour to a Greek salad bursting with freshness and goodness, Chef Sam and his helpers (Tracey, Nancy and Janet) set a brilliant tone for a dining experience that would prove to be unforgettable. 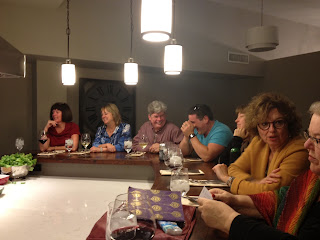 Seeing the fresh vegetables being prepared, garlic being sliced thin and chopped, and pork steaks being lovingly grilled provided a brilliant backdrop for rich and unhurried conversation.  Time stood still as we sat around the bar, sipping on our wine, chatting about whatever topic came to mind, and, most importantly, laughing. 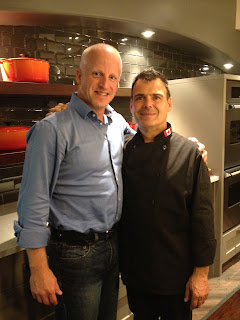 Finishing off with two flavors of locally produced organic ice cream and fresh fruit, we said our farewells and headed back up the street to our hotel.  Apparently, we were the envy of the Communities Collaborating Institute, as several of us were tweeting through the entire experience.
Email Post