Under promise, over deliver - Highway 63 fully twinned in 2016 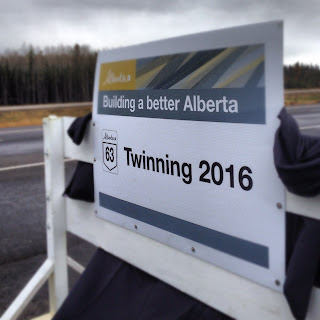 I got an email from Alberta Transportation mid-afternoon on Wednesday inviting me on a bus ride to a spot a couple of hours down the road on Highway 63 where a special announcement would be made.  It was positioned in that email as "a sneak preview of the newly twinned roadway on Highway 63 north of Wandering River."  The department would have Red Arrow coaches, filled with media people and dignitaries, leaving from Edmonton at 7:30 am and Fort McMurray at 8:00 am.

As word of this magical mystery tour began spreading, speculation and anticipation began building.  What would be the scope of the announcement?  What could possibly warrant the level of attention being generated?  Why was there so little information available in advance?

"I'm guessing this is going to be a case of the government under promising and over delivering," I said to Rick Harp on CBC-Edmonton radio on Friday morning as I was finishing my second cup of coffee before leaving for MacDonald Island to catch the bus.

In many ways, it was an event very much out of the ordinary.  Pulling the trigger on something this substantial and logistically challenging less than 48-hours in advance was a risky move.  It was pure luck that I had a window in my busy calendar that allowed me to attend and represent Mayor Blake and my council colleagues.  I'm guessing that based on the cone of silence that hovered over this thing, that pressing the GO-button was far from a certainty.  The bureaucrats, Transportation staffers and communication teams were likely running full-tilt-boogie trying to make it work.

We were given very specific instructions about what we could and could not share, post or tweet as the bus began pulling out from the front of the Suncor Community Leisure Centre, complete with a comprehensive list of embargo rules punctuated with a warning of what would happened if you broke them.


Any person found to be in breach of this embargo will be subject to punitive action which may include a ban from future Government of Alberta announcements.

They were taking the cloak and dagger approach very seriously and wanted all the media outlets to only have carte blanche to release the information at exactly the same time.

I sat in my seat banging out the blog post that was released yesterday about Wednesday's visit by former Prime Minister Paul Martin (Straddling cultures) while Donna Babchishin and Landon Reppert played tour guides, pointing out some of the work that was done and ongoing as we zoomed down the highway.

Ironic and tragic - as our bus load of media folk and leaders headed south on 63, no less than two vehicles passed on double solid lines going around a curve.  Sadly, this is a regular occurrence that can produce devastating results, and too often does.

It was nice to learn the difference between a passing lane and a climbing lane, and also to get some commentary from our MLAs Don Scott and Mike Allen in advance of the actual news conference.

"This was a huge team effort," said Mike Allen, MLA, Fort McMurray-Wood Buffalo, also the special advisor on Highway 63.  "Today's announcement is the culmination of a lot of hard work that has been happening for years, long before the provincial election."

"Our region is really the economic engine of Alberta," said Don Scott, MLA, Fort McMurray-Conklin. "This demonstrates an extreme commitment to get this project done in a timely fashion."

What started out as an 11-year window for completion of twinning, dropped to 8 years when the Toward a Safer 63 report was released on June 29 with an additional commitment to look at all available options to expedite completion even sooner.

"In late July, Premier Redford said to go back and see how we can fund it sooner," said Allen as the Red Arrow bus began approaching the soon-to-be-opened 36-kilometre twinned roadway north of Wandering River.

We were given press releases and background information about both aspects of the announcement - the opening of the 36-km newly-twinned blacktop 9 months ahead of schedule on October 22 and the fast-tracking of the complete twinning of Highway 63 by fall 2016 - with strict release instructions.  The bus descended into silence as everyone nose-dived into the details and media representatives began charting out who they needed to interview to get the best angle on the news.

"The fact that this 36-kilometre section is opening 9 months ahead of schedule is great news," I said to a few reporters gathered round following the formal program.  "The fact that it is opening before winter is even more significant. This is going to save lives."

The list of new infrastructure commitments is significant, totaling over a billion dollars:

Our region's contribution to GDP and provincial royalty coffers is predicated on our ability to get people to and from the work site safely and in a timely, predictable manner.  The growth of our communities and industries is dependent on our ability to move goods effectively to the region from around the province, country and world.  Transportation infrastructure is key and a strategic investment on the part of the Province of Alberta and the Government of Canada.  Getting Highway 63 done as early as possible is just good business.