State of the Island - It's all about U 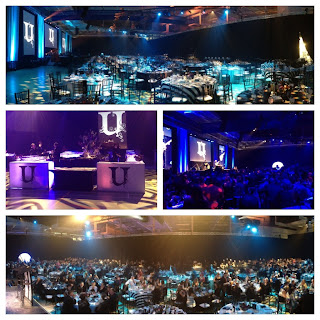 When guests began walking into the activity field house at the Suncor Community Leisure Centre for the 2012 Sate of the Island, the first question that popped into their minds was likely What is the big U all about?  There were a number of big banners featuring a stylistic letter U that begged the question of its meaning.  I think it was Chairman Nick Sanders who first dropped a couple of hints in his speech that the U was actually a reference to you, you, you and YOU. 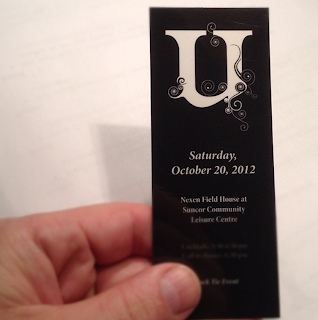 "It means nothing that we have the largest recreational facility in Canada," said Tim Reid, Chief Operating Officer during his State of the Island speech.  "What matters are the individual moments and memories that are created here. It's all about you." 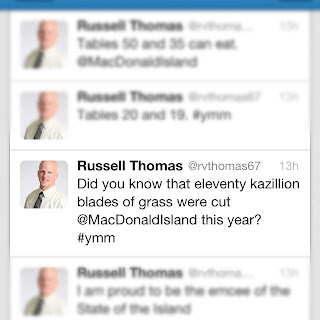 So, rather than hammering away at the robust success indicators and throwing multiple numbers around like the 2 million visits that the Island saw or the eleventy kazillion blade of grass that were cut over the past year, everyone who came to the microphone told personal stories.

Councillor Sheldon Germain, co-emcee for the evening, told a particularly heartfelt story of having been separated from his young daughter during a fire alarm.  He ended up finding her wrapped in a blanket and cradled in the comforting arms of a Mac Island employee.

"That's what's special about the Island," he said.  "It is like a big family."

By this time, my pulse was starting to race and beads of sweat were forming on my brow.

I went back to the library, up to the second level this time, thinking that maybe he was checking out the CDs and DVDs.  He wasn't.

I walked back downstairs, heart really starting to race now, and saw Carolyn Murray, a library staffer and friend, who I knew I could ask if she had seen Ben.  Before doing that, I took another swing through the children's section and there he was, nose buried in a pile of books, quietly sitting at a table.

But Sheldon is absolutely right, if Ben had panicked or had a problem, there are caring people at the Island who would have immediately stepped in to help, because they take a family approach.

I shared the story of having grown up in a small town in Saskatchewan where we played road hockey all through the winter.  When I left and began building my career, road hockey got left behind, for 27 years.  I played for the first time in almost three decades as part of the Play On tournament at MacDonald Island in a celebrity game against Olympic gold medalist Hayley Wickenheiser.  We soundly lost, but it didn't matter.  It was a memory that I'll carry with me forever.

Through all the stories and memories shared, through all the impressions and images MacDonald Island leaves behind, there are threads of family, people, and authentic experiences..

I can't imagine what Helen Bishop was feeling last night as COO Tim Reid presented her with an honourary Mi Team orange jacket.

"Long before Chuck Knight and the vision around the modern MacDonald Island Park, the Island was home to a few families," I announced.  "Tonight, we are honoured to be joined by 90-year old Helen Bishop and her family.  Helen was born right here at MacDonald Island and we're happy she's back home tonight."

The 650 guests rose to their feet as the iconic orange jacket found a new home around the shoulders of a vital and vibrant connection to the rich history of this "gathering place".

"You are a treasure," said Sheldon. "We can't stress enough that MacDonald Island will always be your island."

For me, the highlight of the evening occurred when Dr. Kevin Nagel announced the 2012 inductee to the Walk of Honour.  It became abundantly clear who he was talking about about a full paragraph before he announced the name of John H. Wilson. The applause was tumultuous and the standing ovation prolonged as John made his was from stage left to the stage right stairs to come up to receive his award and say a few words.  He was visibly moved.

"Normally, Russell provides me the words to say at these things," he said.  "Tonight, I have no words."

(John was referencing the fact that in my role at Keyano College, I often prepare speaking notes for him in his role at the Chair of the Keyano College Board of Governors.  Last night, he had to go it alone, and he absolutely nailed it.)

"I got married here.  I raised a family here.  I built a business here.  I love this place!"

For someone who has given so much to the community, it was a fitting honour, and certainly the emotional high point of the 2012 State of the Island.

Shell Albian Sands announced its title partnership of the MacDonald Island Park expansion project, a $2.5 million commitment that resulted in the re-naming of the project to SHELL PLACE.  Tom Purves, the new Vice President of Shell Albian Sands and a recent arrival from Houston, Texas shared his passion for the this community and this project, and invited one of his employees to the stage to introduce the mystery artist.

Leadership Wood Buffalo alum Harvey Tulk proudly got up to the microphone as excitement and anticipation reached their peak. 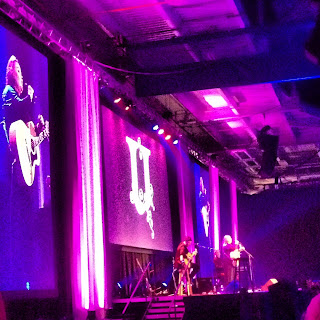 I could go on and on about her voice, sense of humour, and spirit, but I won't.  Jann was spectacular.  At one point, I stopped watching her and began watching the crowd.  What I saw were people smiling, laughing, absolutely enraptured.  They weren't just sitting back and enjoying, they were leaning in, like they couldn't get enough.  It was beautiful to watch.
Email Post