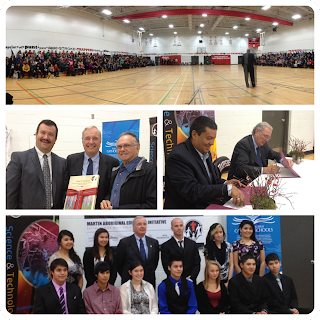 Whew! It's been a week.  With Mayor Blake out of the country, I've been hither and thither as Deputy Mayor attending events, announcements, meetings and myriad other adventures while juggling my full-time tasks at Keyano College and at home.  There hasn't been a moment to sit down and capture the story about meeting former Prime Minister Paul Martin. 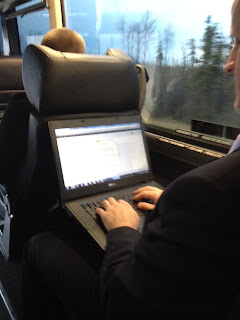 As I type, I am on a Red Arrow bus, about to head down Highway 63 with media and government representatives to attend a highly anticipated announcement south of Wandering River.  This gives me two coveted hours to go back a couple of days to the launch of the Martin Aboriginal Education Initiative at Father Mercredi Community High School on October 17.

Mr. Martin, a luminary of Canadian politics for the better part of the 1990s and the first half of the 2000s, has chosen not to fade into the sunset, but rather focus on one of his passions that flamed up during his years of leadership - Aboriginal youth education.

He brilliantly articulated that Canada's Aboriginal peoples have been forced to straddle two cultures. He wonders why that expectation doesn't exist with non-Aboriginal people.

"I hope we begin to understand that we are all North Americans, and that our heritage is very much Aboriginal," said Mr. Martin to the gathering of leaders and the inaugural cohort of the Aboriginal Entrepreneurship Program.

I had the opportunity to share with Mr. Martin  the story of our son Dylan, who has successful grown into a healthy teenager straddling two cultures, spending weekdays with our family and most weekends and holidays with his mom and her family in Fort McKay.

"It's been fun to watch his recognition of the richness of existing, in fact thriving, in both worlds," I said.

Despite some of the inherent challenges of having a mild form of cerebral palsy, Dylan has an indomitable spirit that has earned him the admiration of his teachers, peers and family.

"He's actually running for Prime Minister of his student council," I shared with Mr. Martin.

"He obviously has a lot of courage," said Canada's 21st Prime Minister.  "I hope he wins."

It was pretty cool to go home and share the news that Dylan had the former Prime Minister's endorsement.

I called over to the school yesterday to see if it was OK that I drop in to watch the election speeches.  Thankfully, I had a break in my schedule that allowed me to slip in unannounced.  I was a little concerned that I might embarrass Dylan by being there, but my fears proved to be unfounded.

The candidates came into the gym first, lining up on a bench in front of a single music stand where they could put their speech notes.  Dylan's cheeks were flushed as he discovered me sitting off to the side.  But I could tell he was touched that I was there, and that my presence added to his resolve.  The students streamed in, and the politicking started.

Speeches were given, one after the other, some brimming with confidence, others struggling to find voice.  Dylan was at the end of the bench and the last to speak.  In my view, he knocked it out of the park.

"What impressed me the most," I said to Heather on the phone when I got back to the office, "was that the first thing he did when he was done was go up to his competition, shake his hand, and wish him the best."

I called home shortly after 4 pm to find out what happened.

"Oh, I won," said Dylan, rather distractedly.  "But, Ben is not doing too well."

Rather than basking in the glory of his victory, he was more concerned about his little brother who had taken a tumble before getting on the bus and had blood flowing from his nose and mouth.  I would argue that it is this authentic empathy that makes Dylan an effective youth leader.

I was proud to send Mr. Martin the good news in a short email yesterday, as I knew it would bring him a smile.  I was so proud of my son - his generous spirit, his authenticity and his courage.
Email Post