One conversation at a time 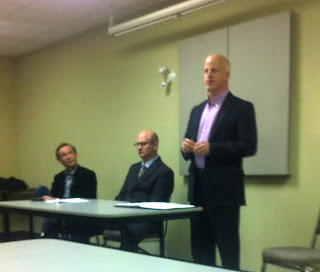 "How many of you are visiting Fort McMurray for the first time?" I asked an impressive delegation of student leaders from the University of Alberta last night during a question and answer session, filling in for Mayor Blake in my role as Deputy Mayor.  Most hands shot up in the air.

"How many people had a negative impression about Fort McMurray before coming here today? Be honest."

A good number of hands sheepishly returned to the up position.

"That is why we are so happy that you are here.  This is our chance to share our community, our stories, which will hopefully leave you with a new picture."

Our MLAs Don Scott and Mike Allen were brilliant in their opening remarks, using passionate and personal perspectives to set the tone for the one hour dialogue with about 50 students studying myriad disciplines, all keenly interested in what is happening in Wood Buffalo and with oil sands development.

"We had over 180 students apply this year," said Keerit Jutla, VP External, OSD (U of A Oil Sands Student Delegation).

The group's mission is very specific: The mission of the Oil Sands Student Delegation (OSD) is to provide an annual trip to Fort McMurray for University of Alberta student leaders. This trip is designed to expose student leaders to the various issues and stakeholders involved in Oil Sands development. By encouraging this inter-group dialogue, young leaders will have the chance to become well versed in various perspectives regarding oil sands development. (www.uofa-oilsands-delegation.org)

This engagement was very similar to others that we've had in recent months.  From the Governor General's Canadian Leadership Conference delegation to the Canadian Oil Sands Education Program facilitated by Inside Education this past summer, I believe we are inspiring a balanced view, one conversation at a time.

"My eyes, mind and person have been opened and inspired," said Morgan Dilts,  a teacher at Jaffray Junior Secondary Elementary School in Jaffray, BC. "I will be a better-informed Canadian thanks to this, and am certain, a better teacher."

There is tremendous power in hearing Don Scott talk about coming here in the early part of the previous decade with his wife Janey and not much else. 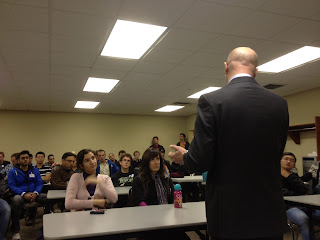 "We slept on the floor of the apartment, my wife likes to remind me," said Don.  "As I recall, we couldn't afford a mattress."

Recognizing the opportunity that existed in Fort McMurray, they made the decision to locate here from Cambridge, England where Don had completed his law degree.  Despite more than a few nights of sleeping on a hard floor, it proved to be the right choice as he has gone on to grow a successful law practice, an active family and a reputation of being one of the great leaders of our community.

Mike Allen, recently tapped by Premier Redford to lead an initiative to explore ways to fast-track solutions for making Highway 63 a safer transportation link between Fort McMurray and the rest of the province, came here in the early 1990s to run a music store.  His community leadership story began long before he embarked on a political path.  An avid musician (trombonist) and arts advocate, Mike ensured that arts and culture had a strong voice in a community that was naturally industry-focused.

Both Mike and Don, former colleagues on Wood Buffalo regional council, have successfully transitioned to the provincial sphere and are nose-to-the-grindstone sharing our story every chance they get.  It was an honour to be on the panel with them last night talking to graduate and doctoral students who represent the next generation of leaders in our province.  Together, we talked about big opportunities, big dreams, and big spirit. 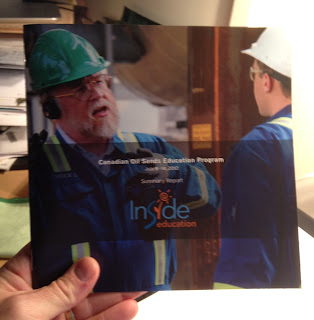 I love this quote from Taina Kanerva, a teacher from Toronto, and a participant in the Canadain Oil Sands Education Program in July 2012, as it captures the importance of these conversations:  "This has opened my eyes in ways I never knew.  The various stakeholders we have met have given us a well-rounded picture of an industry I now realize I knew nothing about.  Every Canadian should have this experience.”

I especially love the last sentence and wish it could be so.
Email Post