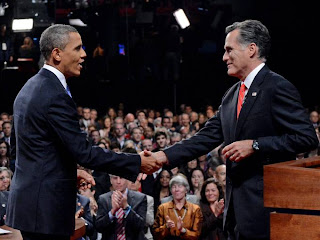 Dylan and I sat down and watched the final Presidential debate last night.  He had already seen the first one, so he was already ingratiated to the styles of the two gentlemen.  I've been so busy that this American election - now two weeks from being over - almost passed me by.

I had heard, from news reports and passing tweets, that Romney fared well in the first one, Obama bounced back in the second, and that this third tangle might tell the tale.

We started watched the tete-a-tete from Lynn University in Boca Raton, Florida on one of the stateside channels - ABC I think - but something wasn't quite right.  The synchronization between the sound and the picture was off by a millisecond or two.  It was really distracting.  So I flipped over a few more channels to the PBS station where the picture sucked, but the words and video matched up.

We watched, listened intently and tweeted, Dylan on his iPad, me on my iPhone.

With the exception of Bush 43, I've been a fan of sitting U.S. Presidents - Democrat or Republican - as far back as I can remember.  And while I was somewhat aware of the Watergate entanglement, Richard Nixon still seemed interesting to me as a young boy.  So, bias declared, I found myself leaning Obama from the opening bell.

Perspective is everything.  I met a high-ranking oil executive import from Texas a few days ago and asked his opinion.

In this individual's mind, debate number two was a shoe-in for Mitt, despite what all the news coverage suggested.

Based on the answers, body language, and statesmanship, Dylan and I both felt that Obama came out on top.  I found Romney to be shifting, uncertain, a little shaken not stirred - though I was seeing tweets regarding Obama suggesting similar things.  Many commentators observed that they were both saying the same things just using slightly different words.

The greatest gaffe in the ensuing battle was slight, easily missed, yet illustrative.  Romney started by saying "If I become President of the United States..."  Then, he caught himself and started again.  "When I become President..."

That little moment of self-doubt, weakness, lack of resolve in an arena where millions of eyes are watching, listening, tweeting and posting can instantly get cranked up in volume so that all the other foreign policy answers fade into the mist.

Yes, his eyes were darting back and forth and blinking with a frequency that suggested a whole number of things - I've watched too many episodes of Lie to Me - and yes, to me, he seemed to be inconsistent in his answers.  But, I saw what I wanted to see.

The polls this morning are giving a slight edge to the President in the third and final debate leading into the November 6th general election.  The public's "slight edge" is a far cry from my lion's leap, but I'm OK with that.  The proof will be in the electoral college in 14 days and all of a sudden the multi-millions of dollars spent on polls, audience testing, surveys, advertising, and smear campaigns will mean diddley.  In a democracy, the power is in the people.  It is they who will decide the next resident of 1600 Pennsylvania Avenue.