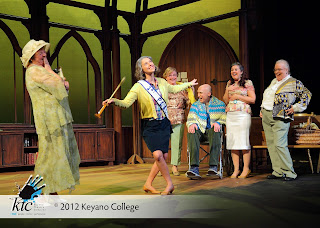 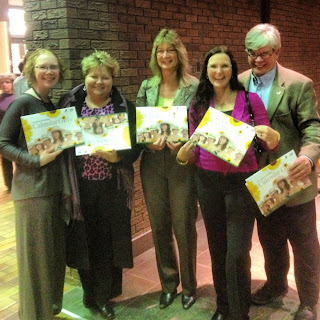 He was among a group of calendar admirers caught on the iPhone during intermission with their newly purchased fundraising calendars in hand along with my lovely wife, Joanne Roberts, Maureen Mielke and Mayor Melissa Blake.  Their smiles speak volumes to why every McMurrayite deserves to see Calendar Girls.

This could be both a frightfully good and painfully bad idea, absolutely depending on the show, but it would have been great to have planted a microphone in the theatre exits last night to capture and share with the cast and crew what was being said as patrons went out at the interval. Had that piece of technology been in place, they would have heard remarks like "So good", "This is amazing", and "Wonderful".

In quite an organic way, a convention was immediately established in act one that at the conclusion of each calendar photograph being taken, the audience would erupt in applause.  It was energizing to feel the enthusiasm and appreciation of the 400-plus patrons on hand to celebrate the opening night of Keyano Theatre Company's second show of the season. 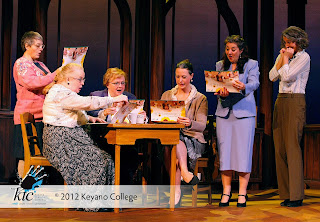 As we came back from our intermission stretch, it was reassuring to see that the addition of an actual fundraising calendar had hit the mark.  From the fronts rows near the stage to the very back of the house, copies of the revealing calendar were stretched open, inspiring animated conversations and bright smiles. 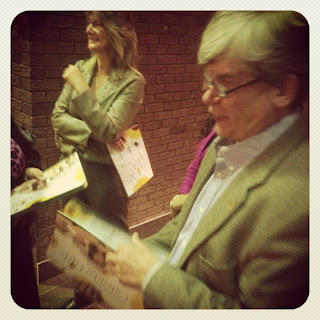 "Net proceeds from the sales of the calendar will be going directly to the Canadian Cancer Society," said Alan Roberts, Director of the Theatre & Arts Centre during his pre-show welcome.  Based on the number of calendars that appeared to sell last night, it will be a sizable check that will get cut at the end of this. 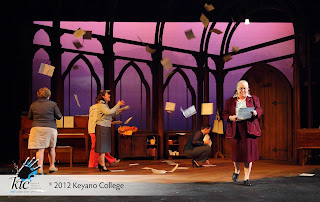 I was personally delighted to see a host of new people on that stage, discovering what it is like to be part of a show, part of a loving and supportive ensemble.  It was equally wonderful to see the return of some familiar faces and some who hadn't been on the stage in a number of years.

It was all hands on deck last night as this production takes off on a run that includes tonight and next Wednesday through Saturday.  An extra bar was set up next to the box office, volunteers were working the coat check and theatre doors, Tracy was at a table selling the fundraising calendar, Lauren was at another table signing up Theatre Angels as part of the Calling All Angels campaign, and staff from the Sawridge Inn and Conference Centre were in abundance as the throng spilled out through the newly installed theatre doors into the post-show party.

Calendar Girls provides a great night of fun, laughter, tears and celebration.  You deserve to experience it.  Tickets are available online at www.keyano.ca/theatre.  Click on BUY TICKETS NOW, pick your performance and your seats.  You'll be glad you did.
Email Post