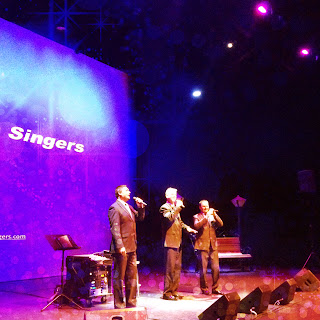 I had never heard of the Freedom Singers before being invited to bring greetings in my role as Deputy Mayor at a fundraising concert last night for the Seventh Day Adventist Church at the Suncor Energy Centre for the Performing Arts.  Matthew - one of the hard working and talented communications guys working at the municipality - provided a great backgrounder and speaking notes on the event which included a link to the following clip from CBC's The Dragon's Den.

Tears came to my eyes at the same time that shiny rivulets of water began appearing on the cheeks of several of the dragons in response to this incredible story of survival, faith and courage. 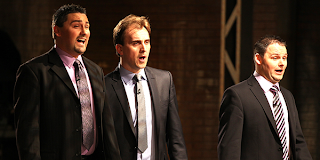 Brother, Simon and Steven Ivascu, and friend Wesley Pop, went from being sealed in a shipping container in Italy, to being nearly baked to death while waiting for two weeks sitting on a dock, to being loaded into the underbelly of a gargantuan container ship, to coming within a whisper of death after running out of water and strength.

Being bounced around in a storm that they later found out almost required the crew to abandon ship, they used the scant tools they had on hand, to chisel out a hole, maybe eighteen inches square, which allowed them to get out and explore the cargo hold.  Completely sealed off with two hatches on either end of the ship, there was absolutely no way for them to escape and find the sustenance needed to keep them alive.

As they crawled back to the container - thinking that if they were to die, it would be better to be found in the place that might offer some clues as to their story - Simon took one last glance at one of the hatches above.

"All of a sudden there was a small sliver of sunlight," he said.

"I peered through that tiny opening and saw someone with the word Croatia written across the back of their overalls.  We didn't have the strength to speak; all I could do was tap gently with the end of my plastic flashlight. Even amid the many sounds of a large ship, that man miraculously heard our tapping and we were saved."

Later, talking to the ship's captain, they found out that not only were those hatches never used, they had been sealed tight because of the storm they had been through.  They could not allow any water to make its way into the bottom section of the boat.

I don't know what happened deep down in the hold of that ship, whether it was a mechanical miracle that broke the seal on that hatch, an hallucination, or if it was a moment of divine intervention.  What I know for sure, is that the miracle of their survival led to a music ministry that is affecting lives across the continent and around the world.

It reminded me of the story I heard while volunteering at a casino a number of years ago that a mother told me about her little daughter.  The young girl had been crossing the street in one of our neighborhoods in Fort McMurray when she was run over by a semi-trailer.  Against all odds, she survived what should have been instant death.  She described that her grandfather had wrapped himself around her to protect her, a grandfather who had passed on many years earlier.

The Freedom Singers all have regular careers and families, but still manage to do over 100 concerts a year, raising money that allows them to travel back to their home country of Romania and bring food to the poor.

"I think most of us don't realize how good we have it in Canada," said Simon.

"We debate whether or not to use the leftovers in our fridge, while people in my home country decide to skip meals to make what little they have stretch farther."

While Simon, Steven and Craig (the replacement in the group for Wesley who has gone on to other things) have committed to reducing their time on the road to focus more on family (a good choice), they will continue sharing their music and their story, inspiring thousands to push beyond the fear and doubt, embracing their faith and belief that salvation is possible. 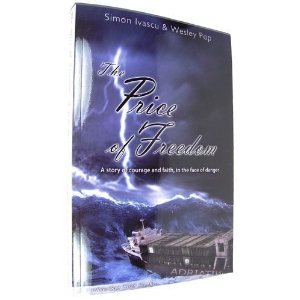 My son Ben was eager to dive into The Price of Freedom, the book that contains an account of their incredible journey that begin with a decision to escape their home country of Romania and ended with their arrival at the port of Montreal.

"I'm already done two chapters," he said when I got home from the Remembrance Day service this morning.

I'll be eager to hear the lessons he picks up from this amazing story. To Simon, Steven and Wesley: thanks for traveling up to Fort McMurray to share your story and your music.
Email Post