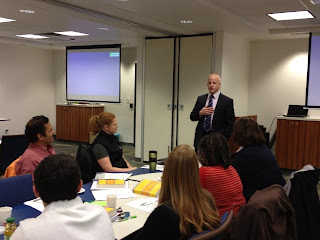 Yesterday morning I had an opportunity to spend 30 minutes with the 2012-13 Leadership Wood Buffalo class, a group of 25 emerging community leaders.  I had great intentions of preparing a dynamic speech, but found myself short of time to put anything together, so I made it up as I went along.  Sometimes - maybe even all times - things happen for a reason. Being unprepared turned out to be the best preparation I could have possibly done.

I started thinking about what I wanted to do as I was settling down for bed the evening before.  By the time I was drifting off, I had a sense of a couple of key things I would do.  Arriving at the venue, I grabbed a napkin, jotted down about 5 points and I was ready.

"The most important things you're going to take from this program are the one on one connections you are going to make," I said.

"The most important thing for me is to begin to get a sense as to who you are.  So I'm going to spend more time than I probably should trying to do that."

I went up to each person in the class, gave them a fist bump, and they told me four things: their name, where they work, what their role is, and the scariest thing they've ever done.

The question popped into my head as I listened to them talking before I was introduced.  Jenny Berube, one of the cast members of Calendar Girls (previewing that night) and a participant in the program, was promoting the show and talking about what it was like to face the fear of taking her clothes off on stage.

As I went around the room, the answers were infinitely interesting, deeply personal, and sincerely scary.  One of the themes that emerged a number of times was that of loss of control, whether it was when a family member was in a car accident or when ambushed by militants in the middle of the Sahara Desert.  Control is something we all crave, need, covet.

I woke up this morning asking myself 'the scariest thing I've ever done' question, and for a time, an answer eluded me.  My mind kept going to scary things that were done to me.  The essence of the question was the element of choice.  What was the scariest thing I chose to do.

The ladies in Calendar Girls chose to say "yes" when offered their parts, and the responsibility to bare it all in front of an audience.  They could have graciously declined.

It took me about 10 minutes to figure it out for myself, the illusory answer to the seemingly simple question.  The scariest thing I ever did was accept a secondment into the role of Manager of Marketing and Communications at Keyano College in 2006.  I tossed and turned over the request by the President to move into this senior role, filling in for a person who was going on a one-year maternity leave.  My wife will confirm how conflicted I was about the decision I had to make.  At the time, I was the publicist at Keyano Theatre and Arts Centre, a member of an amazing team doing some incredible things.  The thought of leaving that behind and stepping into the unknown of a much more responsible position, scared the crap out of me.

I turned down the offer initially, saying that something just didn't feel right.

"Do this for me," he said.  "Sleep on it. Take the weekend to really give it some thought and let me know on Monday."

I did and I did - accept the secondment that is.  It was the scariest decision I have ever made and it has led to so many incredible things: building an amazing team that floors me with their professionalism, doing a multitude of great projects, running for council, making a presentation in San Francisco, giving a TEDx talk, and so much more.