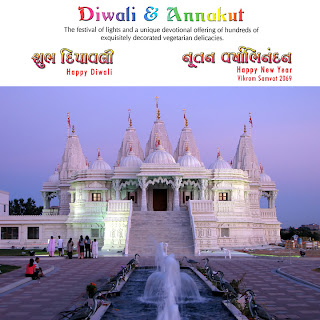 It was one of the most incredible cultural experiences of my life - the Diwali and Annakut celebration hosted by BAPS Swaminarayan Satsang Mandal in Fort McMurray.  One of the most festive events in the Hindu calendar, Diwali is often referred to as the festival of lights.  Annakut, which literally translates to a 'mountain of food', is an elegant offering of - in this case -several hundred vegetarian dishes as an  expression of devotion to God.

Both Dylan and Ben joined me for this auspicious celebration. None of us knew what to expect.  Heather wished she could have come, but she had to fly to Edmonton for an appointment.  We were greeted by one of the local leaders of this spiritual community, Manish Vaid and his son.  They were instantly warm and welcoming, leading us into the main devotional area.

A holy man from the BAPS Mandir in Toronto (the beautiful temple at the top) - Pujya Swamis - described as both a saint and a monk, was in the middle of spiritual discourses as we were led to our seats in the front row.  He was speaking Gujarati, but both Manish and another holy man translated for me and provided the necessary explanations of the various phases of the celebration that ended with the entire gathering of devotees, probably 400 strong, walking past the impressive Annakut, admiring the many traditional and non-traditional dishes - some very North American dishes were also included in the offering, Kit Kat bars and pasta to name a few.

The festival of light, which traditionally includes brilliant fireworks - marks the end of the old year and the arrival of the new.  There were no fireworks at the Fort McMurray celebration, but candles were in abundance, along with many vegetarian dishes placed on a tiered structure in front of pictures of a number of deities.

"The festival of light is not just about the external light," said the Swami.  "It is also about the light within, that which is in all of us."

The three of us were led up to the front where we were presented with a flower and anointed with a red bindi on each of our foreheads.  It is a traditional way of showing respect to important guests; I can't remember a time I felt more honoured. 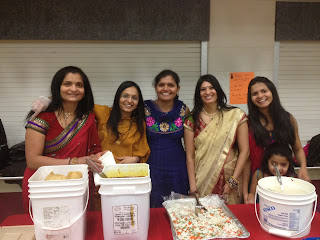 We enjoyed some marvelous food - both spicy and sweet, lovely smiles, great visits and a feeling of being completely welcome. It was entrancing. It was unforgettable.
Email Post