Looking for a few good men 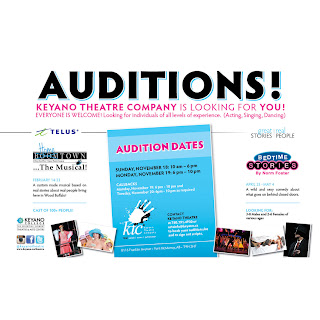 We are looking for a few good men.

It's a great opening line, as Keyano Theatre Company (KTC) casts its nets trying to find some male actors.  With auditions for two different shows coming up this weekend, there is no better time for that person who wants to revisit their high school drama days or their thespian adventures from college or university.  It's also a perfect time to review your bucket list and see if standing on a stage in front of a theatre full of people is on there.

With no disrespect or lack of interest intended regarding females - we need as many of you to come out to auditions as possible - we have had a chronic shortage of men for years, which is somewhat counter intuitive in a community where there is a disproportionate number of fellas. That female to male imbalance has not always been so pronounced.

When I first arrived in Fort McMurray in 1996, there was a healthy ensemble of guys of all ages who filled out the cast lists of several male dominated productions that KTC was able to do in those days.  They were a talented collection of high school and college students, teachers, and oil sands engineers and managers.  That consistent access to male talent doesn't exist anymore; it hasn't for quite some time.

There are some great parts in both Hometown the Musical and Bedtime Stories.  These auditions will quickly and easily give you an opportunity to put your hat in the ring for one or both of these shows.

Top 10 Things You Need to Know About Being in a Keyano Theatre Company Play:

10.  There can be lots of flexibility in terms of scheduling during the rehearsal process.  In other words, don't let the time commitment scare you off.

9.  Learning lines - often the biggest fear factor in doing a play - is not something to worry about.  I have been in dozens and dozens of plays with people of all ages doing it for the first time, and all of them had their lines memorized long before the show opened.

8.  The fun factor is in the red zone.  The rehearsal process builds to production week and finally to the run of the show; it is an incredible trip.  Just ask any of the ladies in Calendar Girls, about to head into production week ; they are having a blast.

7.  Whether you are a seasoned actor or someone trying to scratch an item off your bucket list, being in a KTC production is a great learning experience, one in which you get to work with some of the best in the business.  It is total immersion into the magical world of theatre that has strong addictive qualities.

6.  Commitment is key.  As part of the audition process, KTC staff will give you a comprehensive picture of the time commitment.  Once you say 'yes' to a part, make sure to lock everything into your calendar. It is vital to the process.

5.  Auditions are frightening for most of us.  I've been in many plays over the years, and I still get the shakes standing in front of an unknown director.  The key thing to remember is that the directors - Claude and Misha - are eager to hear you and see you.  They are both kind, gentle and welcoming.

4.  After you've been through 6 weeks of rehearsals, production week and a run of performances, the company of actors, technicians and artists begin to feel like old friends, and in many cases, family.  The ensemble grows into an incredibly cohesive group.

3.  This is a funny one to mention, but back in the day (15 years ago), we had to dash to the other end of Franklin to grab some food during lunch breaks on the weekends.  Today, there is a coterie of restaurants at Franklin and King. It makes a difference. Staying well fed is important.

2.  The excitement as you add layers to the show - set, lights, costumes, make-up, audio and pyro - is infectious.  The energy that is created as you anticipate your first audience in unlike anything you will have experienced previously.

1.  You will feel a part of a living, breathing organism - an integral element no matter the size of the part or the amount of time you spend on stage.  It's a beautiful thing to be a part of, an experience you'll never forget.

Still unsure? Still sitting on the fence? Give KTC a call and talk through what you're feeling, thinking, fearing. Or, send them an email.

These are the same points of contacts to book an audition time and to sign out scripts.  More audition information here.

We're looking for a few good men.  Pass it on.
Email Post