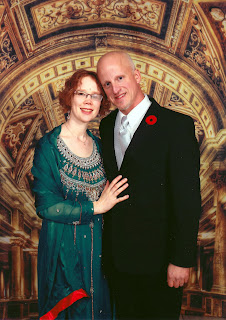 We always like to arrive early at Gala, to get a decent parking spot, and to be among the first to take it all in.  This year, we were maybe four or five couples from the front of the line.  We were the first to get our couple photo taken in the Photomagic booth, the first to swing through the impressive collection of over 100 silent auction items and among the first to buy raffle tickets.  That final first proved to be an important thread to this story, but more on that later.

In one moment calm and serene, the next, hundreds of people were streaming into the lusciously appointed space, utterly transformed from its normal function as a recreational facility. Somehow, the Keyano College Foundation team manages to up the ante in terms of layout, design and technology each year.  There is no question that the 100' x 17' video projection screen - the largest ever used in North America and brand new out-of-the-box for Gala 2012 - was an impressive backdrop to what is the quintessential night on the town in Fort McMurray. 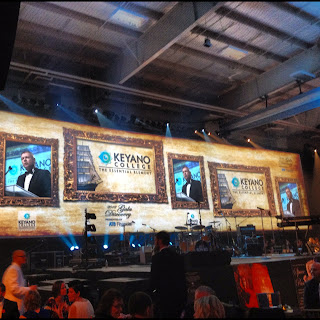 I'm a little bit of an odd duck at these things as I never end up eating.  I know it's crazy, because the selection was unbelievable (thanks to Chartwells Catering), but I happily grabbed my bottle of water and went from one conversation to the next.  For me, Gala, presented by ATB Financial, is the ultimate social occasion, a chance to catch up with old friends and meet some new ones. It is the most anticipated date night of the year for Heather and I, with thoughts about the all-important Gala dress starting pretty much as soon as the last year's event is over. 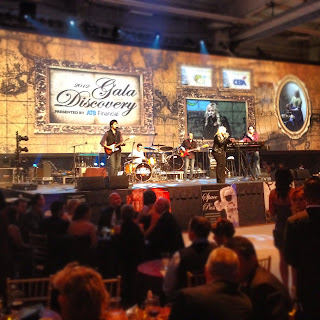 This event is so strong and consistently surprising because of the team behind it all making it happen.  Cindy, Melane, Angele, Alan, Eugene, Nick and the teams of the Keyano Foundation and Keyano Theatre & Arts Centre know Gala inside and out - all of its nuances, challenges, and complexities -and strive to improve on perfection each time out.  Longevity is key, experience critical.  Working with the Gala committee - providing that invaluable community perspective and strategic guidance - the brains and the brawn behind this gargantuan extravaganza deserve a world of credit and thanks. 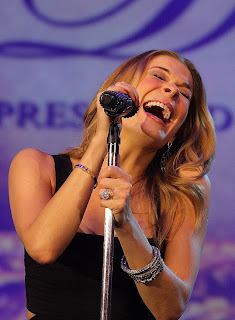 LeAnn Rimes was in stellar form last night, a world-class performer who burst onto the scene in the mid 1990's and has stayed on top ever since.  It seemed to me that more guests than ever before were on the dance floor, getting as close as they could to this vocal phenom, mobile devices in hand and in the air, capturing the experience and sharing it with the world.

Generosity was in abundance last night, as it always is at the annual Gala.  The VIP lounge - the first live auction item to go on the block - went for a higher price than ever before.

"All in and all done," declared auctioneer Ross Jacobs. "Sixteen thousand dollars!" 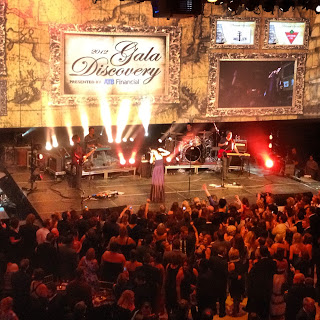 Located on an elevated platform constructed by Aluma Systems, the VIP lounge has an unprecedented view of the main stage and proved to be an ideal spot to enjoy amazing performances by LeAnn Rimes and Hey Romeo, the opening and closing act of the night.

We ended up on the second level midway through the evening, enjoying some great visits with friends while watching the action below.  To be honest, both Heather and I started to fade by the time LeAnn Rimes left the stage - all of that visiting is delightfully exhausting - but we were intent to stick around on the off-chance that one of our ticket purchases was lucky.  I'm glad we stuck around.

They called the 50/50 numbers.  No luck there.  Then they called the numbers for Raffle Prize #1.  I felt like that guy watching the numbers roll by carefully watching his lottery ticket.  In the group of three tickets we had bought, the winning number was the one at the bottom.

"We won!" I shouted, waving my hands in the air trying to get the attention of emcee Ben McCully.

He didn't see me, so I tore off from the platform to the stairs and down to the main level.  I scooted by Mark and Ruth Little, saying a quick hello as I dodged couples going in the opposite direction.  In my mind, I was sure I wasn't going to make it in time and that they would call another number.  They didn't. Whew!

It was a unexpected and lovely end to a lovely evening.  Thank you Keyano College Foundation for another unforgettable Gala.
Email Post