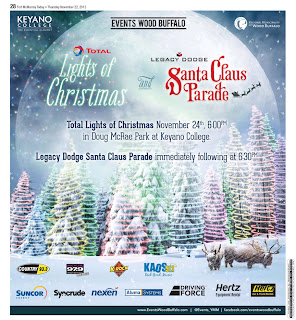 The Santa Claus Parade is an interesting lens through which to see our community.  This thought has niggled at me for the last couple of years, since the annual event moved from the daytime into the evening.  From our vantage point this year on the Communities in Bloom float, we once again were able to see our incredible diversity, northern fortitude (it was -20 last night with a wind), and our big spirit.

Whoever made that decision to move the parade into the evening deserves to get a medal in my view. It is so much better.  Frankly, I'm still recovering from the last time we did it in the daylight hours.  I walked the route that year, proudly holding the banner for Leadership Wood Buffalo.  The problem was that it was cold, way colder than the -20 dished out by Mother Nature last night. It was heart-wrenching to watch the faces of the kids shivering on the float in front of us. 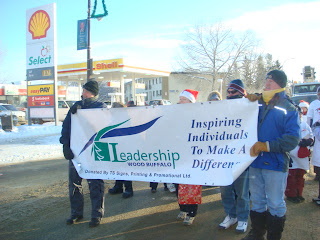 I had dressed for the occasion, but things being what they were, the extra layers proved useless, and by the time I made it home and sat my butt down in the warm bath tub, my private parts were frozen solid.

The shift to an evening parade also opened up the possibility of adding the dimension of light to the experience.  All of a sudden, instead of standing on the sidewalk watching flat beds loaded with shivering children, we had sparkling lights and colour that instantly added new warmth.  Through the work of Events Wood Buffalo, their various partners and sponsors, the Santa Claus Parade - now the Legacy Dodge Santa Claus Parade - has really come into its own.

Ben and I had left early, knowing that getting a parking spot for The Lights of Christmas at Keyano College is usually a challenge.  Driving down Franklin Avenue at 5:30 p.m., every parking spot facing the street was already taken, families at the ready, a full hour ahead of the start of the parade.  We ended up parking in front of Keyano Theatre and walking over to the corner of Franklin and King where hundreds of people had gathered in front of a stage that had been set-up, complete a couple of sofas and a roaring fireplace. 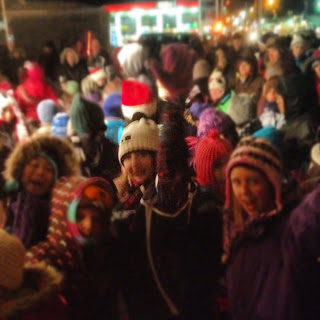 Adults shuffled back and forth trying to keep warm, jovially chatting and sipping hot chocolate, while many of the kids - oblivious to the cold - played around in Doug MacRae Park, chasing each other and rolling around in the snow.  Carols sung, speeches made, Mayor Melissa Blake waved her magic wand, signaling the 100,000 lights in the park to come alive. 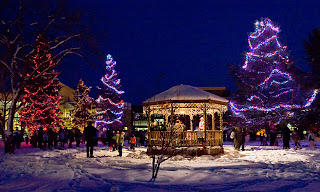 We raced over to Prairie Loop Boulevard where the floats were being staged, getting ready for the anticipated 6:30 p.m. start.  Honestly, I didn't think we would make it as we really didn't know where we were going.  All a sudden, a vehicle pulled up and Mayor Melissa popped out with her two sons, and we knew we were in the right vicinity, as we were riding on the same float.

Ben and I settled next to Jack, Melissa's older son, and the 2012 Legacy Dodge Santa Claus Parade began. 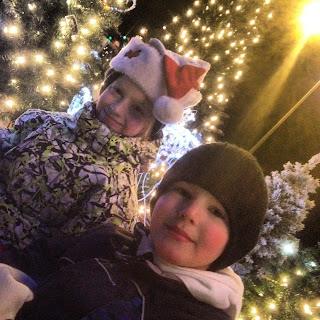 There is no question that all of our ethnic communities were represented as we moved slowly and steadily up Franklin Avenue, past Keyano College, Dr. Clark School, River City Centre and Plaza I before turning on to Riedel Street and back on to Prairie Loop to make our way back to our starting position.  I saw many families from the Philippines, China, India, and Pakistan.  I saw groups from Africa, the Middle East and South America.  I kept thinking that this kind of event must be extra magical for folks who come from places in the world where it is warm most of the time.  Standing on a street corner with hundreds of fellow Canadians waving at people riding on light and tinsel adorned floats in the freezing cold must seem incredibly novel and strangely enchanting.  I certainly got that sense looking into the eyes of the small children, perched on the shoulders of their parents to get the best view.

I wonder about the digital story that was captured from last night's parade.  The number of phones and cameras that I saw was incredible.  Even the fellows who bumped into the parade, stuck in traffic waiting for everything to pass, had their windows down snapping pictures, capturing video footage to post, send and share.  Among them were grizzled contractors, hard working taxi drivers and vehicles full of revelers trying to get to their Saturday night parties.  They were just as interested and friendly as the throngs of young families lining the route.

And just as quickly as it materialized, the parade dissipated, long streams of vehicles flowing out of the downtown core back to their homes on the other side of the bridge.  Ben and I trudged back to our car, about three blocks, toes starting to feel numb along with the tips of our fingers.  It was a good cold though, as being able to experience the magic of the parade was completely worth it.
Email Post