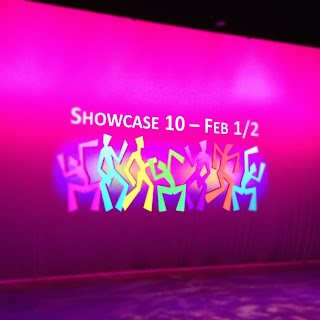 We almost had a quorum last night at the Suncor Energy Centre for the Performing Arts, as members of the core acting ensemble of Hometown...The Musical! arrived en masse for Generation Dance Studio's Showcase 10.  It was important to us to show our support to a group of dancers who have been so supportive of us.  So, apart from that connection, this blog post is going to shed little light on Hometown, instead shifting its focus to our dance friends and their extraordinary Showcase event.

Through the evening, split into two acts separated by an intermission, ensemble numbers were interspersed with solo and duo presentations.  With the exception of the little tykes, every face was familiar.  There was an enormous sense of pride as we watched our Hometown colleagues own the stage.

It was a great opportunity for me to test myself in terms of names.  That's Grace, Morgan, Leanne, and Amanda, I thought to myself as a group of junior dancers floated by. A few short weeks ago, there were only a small handful that I could name, now most are completely familiar with only a few that trip me up.

The show was incredibly tight with a pre-taped emcee providing just enough narrative between numbers to allow for the necessary scene changes.  Stage hands seamlessly brought in props and set pieces ranging from a funky space capsule for Leanne's number to a chain link fence that spanned the width of the stage for a piece called Schindler's List by Jon Cestnick and Kayla Barrow.

"The level of talent is extraordinary," said David Whitelock, Executive Director of Events Wood Buffalo during the intermission.  He had that look in his eyes that revealed just how impressed he was by what he was seeing.  This is an arts professional who has produced and seen world-class artists on multiple continents, and there was no question that these committed and gifted dancers had made a measurable impression.

Nicole McMillan, a brilliant performer and Dancer of the Year in 2012, stood down stage right as Sean McIlveen announced the incredibly difficult decision of who would take her place in 2013.

There was an eruption of cheers, in the audience and on stage, as Mackenzie's face revealed authentic shock and awe.  She made her way over to Nicole to accept her congratulations, some flowers and the adulation of the entire company as they converged as one. 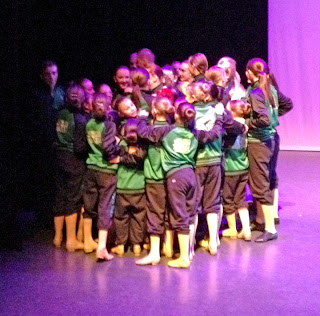 As I look at the list of performances which Miss Kim kindly sent to me early this morning, there are so many standouts in terms of power, impact and dance virtuosity.  Emma Schedlosky's beautiful lyrical performance of Raggedy Ann, Leanne Bourque's out-of-this-world Highly Illogical, and Carly McMillan's hilarious musical theatre tribute to Oprah were fantastic.  The Swamp by Julien Naud and Amanda Scantland was totally creepy and slimy, in a way that was completely brilliant and strangely beautiful.  And I can't tell you how pleased I was to get a dose of Dexter thanks to the Advanced Hip Hop group.

The depth of excellence was extraordinary throughout all the pieces, the level of creativity and dedication was inspiring.  The thought that kept going through my mind was that the broader community needs to see this artistic brilliance, all of those people who don't have kids in dance, or who would never have occasion to see these amazing performers.  Hometown provides an excellent vehicle for that to begin to happen.  The way that tickets are selling - preview and opening night are nearing sell-out status - over 4,000 people will get to witness the incredible things that are happening with dance in our community and with Generation Dance Studio.

Congratulations and thanks to every single dancer who put their heart and soul into last night's final Showcase, as Generation Dance Studio transitions to the Northern Dance-Off, a dance festival featuring adjudicator Anthony "Kanec" Carr, on April 21 and 22 at the Keyano Recital Theatre.  Visit www.northerndanceoff.com to find out more. 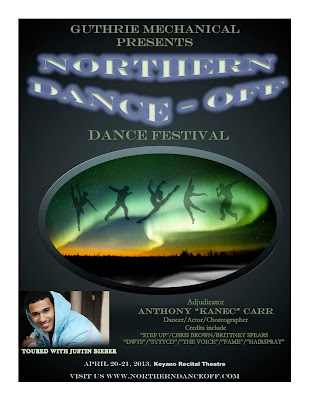