These will be my final thoughts about Hometown...The Musical! before I turn it over to the cast, crew and artistic team in the Journey to Hometown, Epilogue.  If you are on Twitter or Facebook, you've seen the comments, reactions and community pride that was inspired by this production and collective creation process.  Every single person involved - and if you include all the interviewees, parents and volunteers, that would be hundreds - has been affected at some level.  Tomorrow, I turn it over to them to share their thoughts.  Submissions have already begun pouring in, so stay tuned.

Unbeknownst to me, Jack Avery was in the audience last night.  Somehow our lines got crossed as several of us thought he would be at the closing night performance.  Jack was the inspiration for the Grandpa George character, "the 5th person hired at the GCOS site." Turning 88 years old today, Jack embodies the rich history of this place we call home, and the fact that he was in the audience was one of the highlights of this process for me.  In retrospect, I'm kind of glad I didn't know he was there, as it might have made Krista and I a little nervous - Krista plays the reporter in the oil sands retrospective scene. I'd like to think we gave him our best performance - to date.

The audience is so integral to this show, as the energy they bring fuels the magic.  There are a number of indicators early in Hometown that tell us whether the gathered masses "got game" or not.  If we get a good chuckle when Nolan talks about the fender bender in the opening segment, that's a very positive sign.  Last night, their laughs were hearty.  They were outright peeing-their-pants hysterical by the time Michelle Ploughman, playing Mom, got into her toilet "hover stance". 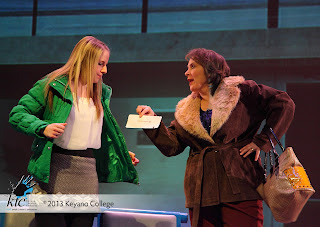 The cheers, hoots and hollers all add to this experience, as do the fun-loving souls who stand up and start clapping and singing along as soon as we begin the extended curtain call segment, affectionately known as "The Mash-Up".

After each performance, I begin wiping away my make-up, keeping an ear out for the bar boys in their group dressing room talking about the audience response, and whether or not they gave us a standing ovation.  Last night they, along with the rest of the cast, were perfectly giddy because the audience was amazingly responsive and encouraging.  I got the sense that nobody wanted the night to end.

In my heart, last night was for Jenna, who has had to sit out the remaining performances after spraining her ankle during Thursday's "Paradise" scene.  She sat with her mom Penny and got the unique privilege of being able to see the show.  Knowing she was there, knowing she was helping to get the audience pumped up, made all the difference in the world.  Last night's performance was just plain fun.

I was telling Greg Scarborough - my dressing room mate - that my goal was to get through "Sweet Home Fort McMurray" and get it 100 percent right before we close the show.  I was 95 percent of the way there last night thanks to my guide Dustin Young, who stands in the line right in front of me.  My ability to sing and dance at the same time is getting better every time we do it.

I'll have mixed emotions packing up my things and walking out of the dressing room for the final time late tonight.  On the one hand, it will be great to reconnect with my family, get some much-needed home time and re-charge my batteries.  On the other hand, there will be an enhanced level of sadness in putting this show to bed, as it has been such an enriching experience.  The words "Hometown family" keep getting used, because that is was we've grown into. 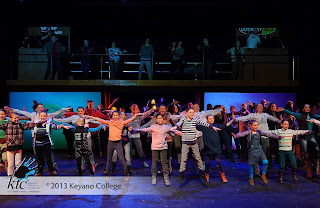 "I love my hometown," says Karlie Boostrom at the end of the play.  "It's the place I want to be."

I get the sense that the 4,300 people who will have seen Hometown...The Musical! completely agree.
Email Post