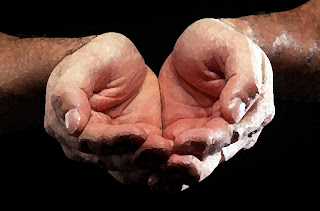 The pause before the storm.

Last night was our last opportunity to catch up on laundry, spend some time at home, and recharge our batteries before we jump into tech, followed closely thereafter by production week.  The cast may have sensed that things are about to shift into high gear as we had two additional faces at the production table during rehearsal on Sunday: Alan Roberts, director of Keyano Theatre & Arts Centre and lighting designer for Hometown, and Darren O'Donnell, the projections designer who has joined us all the way from New Brunswick.

Tonight will be the last time we run the show in the rehearsal hall, desperately trying to "hug some wall" to make room for other actors and set pieces to fly off and on the stage.  The tape on the floor, marking the location and size of the platform, proscenium and apron will get supplanted by the real deal on Wednesday, as we officially move on to the main stage.

There is a mystical quality about migrating to the actual deck.  We will pass through the loading dock, turning left from the scene shop - carefully cleaned in preparation for the arrival of the ensemble, between the curtains on stage right, past the proscenium, down the stairs leading into the house, and into the theatre seats.  As we cluster as a group, usually in the third and fourth rows - likely more this time around as our group is five times as large as normal - we will get our first glimpse of the set.

Even though it is carefully designed and constructed, there are always unseen potential hazards and safety protocols that need to be understood before walking the set for the first time.  That's a job that falls on Nick Beach, production manager.  Normally, the group gathered around for the safety speech has heard it before, having usually appeared in other productions.  When the masses gathered for Hometown...The Musical! hear the safety song and dance, for many it will be the first time.  It should be interesting, as there are little rules and traditions that us old-timers take for granted that will shared.

A few things that jump to mind include:


Never touch the cyc, or cyclorama - the big off-white fabric that usually runs the length and height of the stage near the back wall.  The material is very sensitive and any mark left by passing fingers will potentially show.

Never, never, never go up the winding stairs behind the proscenium wall stage left.  This is an access to the fly grid many feet above that is to be used only by the technical crew.

Never stand under ladders, especially near the back door upstage right, as crew could come flying down  at any moment and step on your head.

There aren't a lot of nevers and don'ts, but there are a few.  The message we'll get is that the safety of each and every person is top priority.  By the time we hit the end of Act One on opening night, we'll be able to safely and confidently escape the stage in the dark.  At least, that's the goal.

When Nick is done, Steph (stage manager) will say a few words, then invite and encourage the ensemble to walk the set, getting a feel for the escape stairs, platform, and myriad other things that will need to be understood.  Then we will likely hear "Places for the top of Act One," and jump into the first run in this hallowed space.

There is a word that pops into my head when we first move into the main theatre with a production.  It never fails to reveal itself, though I struggled to remember it this morning while writing this.  My hands seemed to remember what my brain could not, forming themselves into a bowl.

Crucible.  It finally came to me.

The theatre is a crucible, a vessel, a container that that enables unforgettable moments, kindles friendships, and inspires creative brilliance.  Michael Beamish uses the word "sacred', I say "hallowed", others might say "spiritual", but the essence of the crucible is the the same.  We are about to enter the place where the magic happens.  I can't wait.
Email Post