I am sitting here in the living room, feet up on the coffee table, sipping on my scotch, wiping tears from my eyes looking at all the comments about Hometown...The Musical! that have erupted on Twitter and Facebook.  Then I read Kevin Thornton's review of the show, and almost start weeping.  The response to this amazing adventure has been nothing short of phenomenal.  The standing ovation we received tonight was the longest and most sustained that I've ever experienced.

Claude is back in Vancouver, needing to pay attention to his day job at the Kay Meek Centre.  I texted him shortly after the curtain came down on this performance, because he deserved to know the impact of the monster he co-created with Michael Beamish.  I didn't see him, but my son Dylan tells me that Michael was near the back of the house at the end of tonight's performance swaying back and forth, soaking in the love that was being poured out by the third sold out crowd since we previewed on Thursday.  These two guys deserve so much credit for crafting a beautiful story that has managed to connect on multiple levels.

There are so many moments that the audience will never see, little things that happen behind the scenes as we're getting ready to go on, or sometimes, in the middle of a performance:

The junior dancers rushing in looking for Bear, so they can give him some colouring creations they had done.

The crew on stage right - Jennifer, Patrick and Pamela, dancing along to "Burlesque" in the wings while Crystal Milburn stands against the wall mouthing the words to the song.

A touching moment as Bear connects with the youngest member of our ensemble, Madeleine. 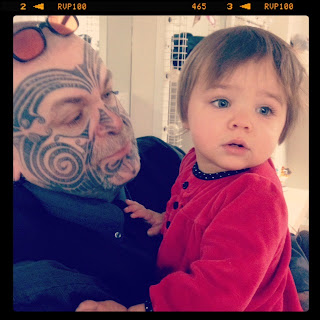 The gargantuan traffic jam in the back hallway that happens directly following "I Wanna Be Sedated", as everyone dashes with intent to their next entrance.

Several GDS girls who break into song for the bar boys waiting for our 15-minute call.


The notes I pass to Sara at the ticket wicket as I walk back into the scene during "Northern Girl" in Act Two.

The 15 minutes of bedlam we enjoyed prior to today's matinee when we filmed our very own Harlem Shake video.

The moments are many, the memories indelible, the friendships formed - priceless.  There is so much humanity that has happened on this incredible journey, that it instantly warms my heart and moistens my eyes just thinking about it.

To say that Hometown...The Musical! is personal would be a grand understatement.  It is deeply personal, profound, moving, passionate, compelling, authentic and life-changing.  Apparently, it's also fine entertainment, which is icing on the cake.  Tickets are going to go super-fast for the four remaining public performances - our Wednesday show has been pre-purchased by a company using it as a customer appreciation event.
Email Post