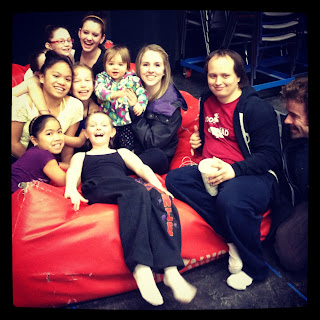 "Of the four shows I've stage managed at Keyano Theatre, this is the first time we've made it through the entire thing on this night," said Steph Link, stage manager for Hometown...The Musical! after last evening's run through on the main stage without the technical crew.  It was a reason to celebrate as the cast burst into applause.

It was our precious time to figure out how entrances, exits, bench moves, quick changes and various other transitional bits were going to go on the actual deck.  With a cast of over 100, traffic backstage is definitely an issue, exacerbated by piles of props and set pieces that compete for the scant real estate in the parts of the stage the audience never sees.

Moving out of the rehearsal hall and on to the deck is always fun, yet challenging.  As I dived into my Grandpa scenes I was reminded of how the crucible of the theatre swallows up sound.  I felt like I was talking at my normal stage volume, but what I heard sounded so different than in the rehearsal space.  That said, my hearing completely sucks at the moment because I'm so stuffed up.  The cold/flu that came to visit early in January is refusing to the vacate the premises, which has clogged up my middle ear on my left side, which brings all vibrations of that eardrum to a grinding halt.  So, the large space, coupled with 50 percent hearing, probably accounted for why I thought I sounded like a little mouse last night.

We move into cue to cue with the full technical crew tonight, including my son Dylan, taking his first stab at being involved behind the scenes.  He is very excited about the notion of being a part of Hometown.  I have no idea what he is going to go through as he is going to be a follow-spot operator, a role that I have never played.

Many of the things we've heard or wondered about the show get revealed to us tonight, including projections, lighting cues, vidoes, sound reinforcement, set pieces that fly-in from above, and many other technical tricks that are going to help illuminate and punctuate our story.  It's a fascinating time for the actors, as up to this point, we've only been able to imagine the physical world of the airport terminal in which we've been playing.  Tonight, that terminal will appear as if by magic thanks to some extraordinary technical and design work that has been happening surreptitiously in parallel with our acting process.


Every time I do a show, there is a moment as I stand in the wings when I get the sense that I was just here doing The Farnsworth Invention, or Beauty and the Beast, or Death of Salesman.  I was having one of those moments on stage left when one of the most naturally gifted dancers I have ever seen asked me a question.

"How many shows have you done," asked Julien Naud in a hushed whisper.


I held up ten fingers, each one connected to a memory, people, things that were going on in my life at the time, a story.  And while each journey has been different, there is a thread that runs through each, a sense of magic, anticipation and of family.  We're still over a week from opening, but our Hometown family already feels like home. I look forward to seeing them all and will miss them when it is time to say goodbye when we close the show on February 23rd.

"It's the place I want to be," says Karlie Boostrom, playing the role of the narrator near the end of the show, saying the words that encapsulate our feelings about being on the stage telling this story, about the place we call home.

And when we finally open the house to an audience, it's the place you need to be.  Because Hometown is not just our story, it's yours, too.