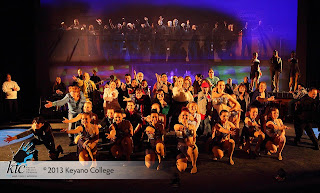 Fourteen years ago we were on stage performing The Taming of the Shrew, under the tutelage of director James MacDonald.  It was a great production with some awesome people like David Kirschner, Jr., Catherine Yuill and many others who delivered a rip roaring good time.  On the Saturday night of opening weekend, Nadia went into labour, though the package wasn't due to arrive until April.  Dylan was born two days later, just a breath over four pounds.  The generosity and support of the cast and crew was extraordinary during a time that was both magical and a little uncertain, as with most premature births. 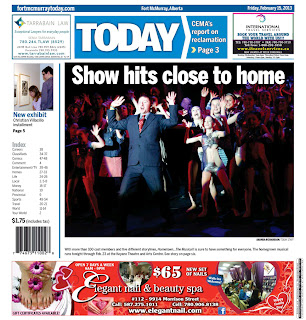 Fourteen years later Dylan had returned to the crucible where he first made his presence felt, operating the follow spot for Hometown...The Musical!  It was pretty special to wake-up on the morning of his birthday to see the front page of the Fort McMurray Today featuring many of the wonderful people who are on this Hometown journey, lit up by Dylan's spot.  That he is kindling his love of theatre and his desire to be a part of a team, brings us incredible joy.

Joy was in much abundance as we opened the show last night.  There was an unmistakable energy between the sold out audience and the 100-plus performers on the stage - sizzling, sentimental, authentic.

"Beyond marvelous," said Sharon Heading as we connected at the post-show reception.

"That was me," said one patron.  "I was in that exact situation."

"I had a tear in my eye as that lady left to go back to Newfoundland," said another guest.  "I had that happen to me."

Everyone will connect with different things when they come and see this show that has already been enjoyed by over a thousand people after only two performances.  That's the beauty of the work done by Michael Beamish and Claude Giroux in taking dozens of interviews and weaving them into a plausible story and an honest representation of our community.

There were a couple of standout moments during the memorable opening of Keyano Theatre Company's largest show in its 33-year history.

Michelle Ploughman delivered a monologue about using a dingy bathroom at a tiny gas station in the middle of nowhere in a way that had the audience howling with laughter.

The Shantelle Davidson Band blew them away several times, but especially with their cover of "Sweet Child of Mine."

Julien Naud and Kim Hurley were the perfect device to connect everything together in a comical and extraordinarily skillful way as the janitor and security guard.  And Julian's Charlie Chaplin flash mob sequence knocked their socks off, especially when the junior dancers joined in.

Mackenzie Walas and Jenn Lynch touched hearts as their simmering romance developed throughout the show culminating in their amazing "Fix You" duet in Act Two. 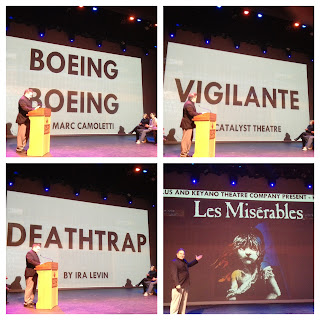 We began the day with the exciting announcement that Keyano Theatre Company will be producing Les Misérables next season.  Before we spilled the beans on the line-up which also includes Boeing-Boeing, Deathtrap and Vigilante, we asked Sherry Duncan to share her personal story about what it has meant to her as a newcomer to the Keyano Theatre stage to be in this production.  These nine minutes provide an amazing testament to the value and very personal dimension to the community theatre experience.  It is one of the most moving speeches I have ever heard and cuts through to the core of why art matters.

There will be many perspectives shared about whether Hometown...The Musical! achieved its objective of capturing the story of us and this place we call home.  I like this candid assessment shared on Facebook by Bill MacKinnon following last night's performance.

The story sure hit home for me. Often, the truth was a bit raw. Fort McMurray is not for everyone and every person's story is different. We all make sacrifices and reap the rewards. When you stay here, you get more rewards and we are the only ones who know it to be true.

I am very pleased the mixed cultural story was told, too. No place else would have an Abram's land. Showing the lady from the Philippines with the couple from the east coast and then bringing the 2 stories together was very touching. This really happens in Fort McMurray every day.

Thanks to everyone who support and encourage us: family, friends, colleagues, neighbors. Your presence at the show provides the integral and most-important ingredient to this process.  Your energy, vulnerability, and big spirit elevate the story; you fuel the magic. 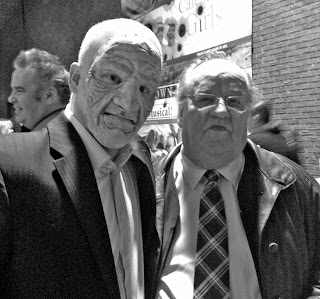 I especially appreciated seeing my friend Len at last night's opening.  He was one of the seniors interviewed by Michael during the script development process.  His memories and words are peppered through a number of my speeches, and it meant the world to me that he was there. 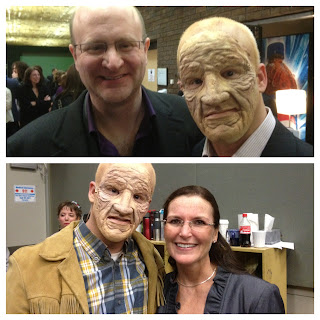 Having Mayor Blake as part of the show, seeing the bright faces and supportive tweets of MLA's Don Scott and Mike Allen, and hearing the sage observations of Ken Chapman, Chair of Arts Council Wood Buffalo made the opening of this incredible show even more special. The only thing that would take the experience into the stratosphere would be a clandestine visit by Premier Alison Redford, as I know in her heart that seeing Hometown would mean the world to her, as her passion and understanding for Wood Buffalo formed the seed that grew into a most amazing theatrical flower. Madame Premier, there are a few tickets left for next weekend's performances.  We can hook you up!