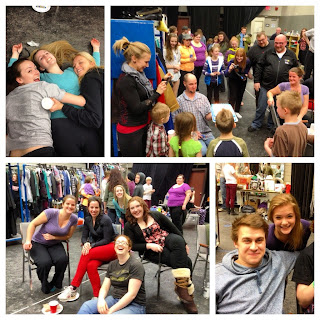 My fellow cast members would be proud of me; I slept in till 6:45 am.  My eyes remain super tired and my lips are raw after spending 11 hours in the dry theatre for the final day of an epic cue-to-cue process for Hometown...The Musical!  I'm happy to report that we made it through the whole show, though it took four full days to do it.

"Four days ago, when we started this process, it was the first time this team of technicians were seeing the show and the over one thousand cues we were throwing at them," said co-director Claude Giroux, visibly holding back tears reflecting the emotion and import of what we had collectively just been through.  "There are major theatres that I have worked in that have not tackled something this large."

"I've directed shows where we've had as many lighting cues, or shows with as many projections or sound cues, but never one with this much of everything," Claude said this morning, after emerging from a scant five hours of sleep. "Nick said we were at 1,067 cues, all of which Steph has to call."

Trying to synchronize a live band with multiple projections, slides, light and sound cues, along with the choreography and movement patterns of over 100 on-stage performers is no easy task.  There were times when we were in a holding pattern for what seemed like an eternity while Stephanie Link, our world-class stage manager, worked out the details in the cross aisle with a team of professionals scattered around the theatre. 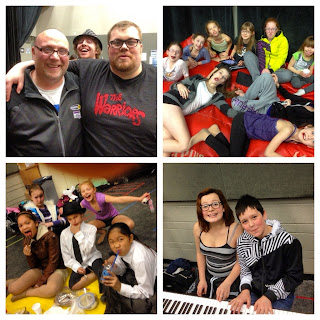 It was an exhausting four days for all of us, but we survived.  And despite the lateness of the hour - we finished at 11 pm last night - there was exuberant applause as the ensemble acknowledged the historic work of the production crew and artistic team.  We are ready for our full tech-dress on Tuesday night.

I wrote a partial submission for this episode of Journey to Hometown, longhand, sitting in my dressing room during the flashback sequences last night, a section of the play during which I am not required.  I'll transcribe it now.


We are on Day 4 of cue-to-cue for Hometown, slugging through almost 1,000 cues, more than triple the number of an average show.  There is nothing average about this production.  It is much closer to extraordinary than ordinary.

As the McMurray Inter-Church Choir belted out "All Things Are Possible", I felt a discernible lump in my throat and water in the corners of my eyes.  Set against the brilliant projection frame designed by Darren O'Donnell from New Brunswick, and swaying back and forth to the direction of Pastor Dawn, the choir channeled the power of opening night, when the audience's energy will undoubtedly take this moment to incredible heights.

I have to pause and say a few words about Deanna Boostram and Karla Swansburg, because they look for their names every time I post a new episode in the Journey to Hometown series (and because they are both pretty awesome).

Deanna plays my daughter in the show.  She is also the real-life mother of two other members of the ensemble including Karlie - our incredible narrator and one of the most striking young musical entertainers to emerge from this region in a generation, and Kelsea - who does an incredible job staying focused, doing her blocking and singing despite being the youngest person in the ensemble and despite the very long days.  This is a true family affair for Deanna, as her husband Mel is a musician and vocalist in the Shantelle Davidson band who are doing an awesome job in the show from the confines of the band cave located centre stage under the platform that stretches across the back of the deck.  It has been great having her positive energy and great singing voice as part of this incredible journey.  And the fact that her whole family has done it with her, makes it extra special. She also carries the cheat sheet to remind the Hawking family of where and when we need to be on-stage.  When my brain is tired, that piece of paper becomes a lifeline.

Adding to the east coast infusion of talent that peppers Hometown is Karla, a teacher, talented actress and  singer.  She plays one-half of a Newfoundland couple in the show, the half that can't wait to return home because she has not been able to adjust to life in Fort McMurray.  Karla has an amazing voice and adds tremendous value to Keyano Theatre Company with her talent, commitment and spirit. 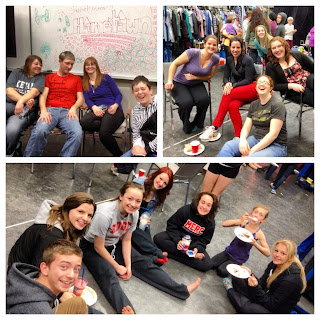 There are so many great people that have given hours and hours of their time to make this happen, the staging of the story of us, and this place we call home.  Only some will get named in this blog series, but they are all here, woven into the passion, beauty and wonder I'm trying to capture and share through this writing process.  All of them, on-stage and off, are integral to bringing Hometown...The Musical! to life.  They are the magic makers, the dream weavers, each and every one.
Email Post