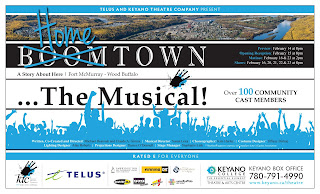 There is a lot to say about Hometown...The Musical!  That is abundantly clear as I begin Part 19 of this behind-the-scenes narrative.  Up to last night, this entire process has been mostly tech-free.  Apart Susan Lexa's electronic keyboard and a few recorded tunes, our technical exposure had been minimal.  All of that dramatically changed during last night's beginning of the cue-to-cue process.

We settled into the comfortable seats of the house to get a few notes before our merry march into myriad sound, light, projection, slide-show, fly and effects cues.  Alan Roberts, Director of the Theatre & Arts Centre, also lighting designer on this show, reminded us of the size and scope of Hometown.

"This is not only the largest production in KTC (Keyano Theatre Company) history, it is also breaking new ground in terms of the technology we are using," he said.


Hometown...The Musical!  by the numbers

As I sat there at my spot on the bench downstage left waiting for Steph to let us know whether we were going forward or moving back, I reflected on the incredible gift to our community of Keyano Theatre and all of its incredible people, equipment and technology.

I leaned over to Jack Bartlett, playing my grandson, and told him about my humble theatre beginnings in Saskatoon, running a little group called Newman Players at St. Thomas More College.  Our stage was in the basement of the chapel.  The first production we did was A Man For All Seasons by Robert Bolt, using 10 maybe 12 lighting fixtures, a dimmer board with 6 channels, and an apron we had cobbled (literally) together from whatever spare pieces of lumber we could find.  The fact that it didn't collapse was a blessed miracle.

The level of technology ebbed and flowed as I went from directing, producing and acting in shows in disparate communities on my broadcasting career path, from Qualicum Beach on Vancouver Island to Stettler in central Alberta, to Drumheller in the south.  But when OK Radio Group general manager Kelly Boyd brought me to Keyano Theatre during my interview tour in January 1996, I was awestruck and  completely hooked - if offered the job I would absolutely accept.

Seventeen amazing years and some ten productions later, I remain awestruck by KeyanoTheatre, our "sacred space", as our co-director Michael Beamish likes to say, our creative crucible.

Sometimes to fully appreciate something, you need to look at it through a different lens.  We have so much to be thankful for and to celebrate with what is happening at Keyano Theatre & Arts Centre and with Hometown...The Musical!

"This is Broadway quality," said Kim Hurley, choreographer of the show and playing the riveting security guard, as we stared at the unbelievably real projections on the back wall of the set.  I was struck by the manner-of-fact kind of way she said it, an arts professional who knows what she's talking about.  It spoke volumes about what we were looking at and what you will see when Hometown opens one week from today. 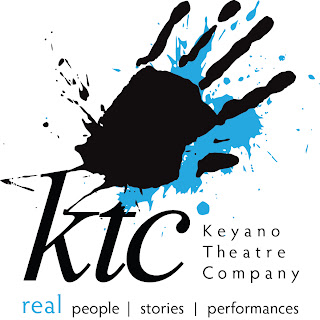 Alan, Eugene, Nick and the entire technical staff of Keyano Theatre & Arts Centre are often unheralded, because what they do, along with the knowledge and expertise they provide to the community and college, often happens beyond the spotlight, behind the curtain.  Make no mistake about it, they are the magic-makers, the dream-weavers who take real people, stories and performances and turn them into something unforgettable.
Email Post