The power of an open door 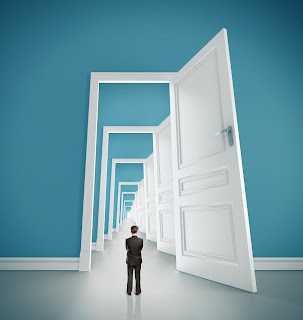 The front door of our office area was pretty much closed all the time as there was this security device that started to beep annoyingly if it was open for longer than 20 seconds.  The only exception to that rule was when it was propped open in one particular position.  Then the device would discern it to be a person and it would remain silent. I'm guessing that the security measure was to ensure that the main door got closed when there was no one in the area - an audible cue to "shut the damn door".

Said door remained closed - though unlocked, as there was a manual switch you could flip to allow entry, even though the electronic box outside the door often flashed red suggesting that entry wasn't going to happen - all through the fall and into the winter.  When I returned after the Christmas holidays, there was the door, propped wide open, and not a beep to be heard.

"Oh my God," I said to Pamela, the newly hired administrative assistant for the Keyano Conservatory.  "How did you manage to pull off this New Year's miracle?"

"I called and asked if they could turn it off, and they did."

The difference in energy, activity and connectivity is distinct and delightful.

Where people used to hesitate before cautiously trying the door handle, now they wander in, as if drawn by some unseen force.  If Pamela is not around, one of us - Michael, Jane, Erin, or Misha - is quick to jump up from what we're doing to say hello.  Getting to engage these random folks, if only for five or ten minutes, has become one of the great joys of my job.

I enjoyed meeting Jessica Hines, a photographer who lives near Savannah, Georgia who was up in the area visiting her significant other, an engineer working in Wood Buffalo.  The two of them wandered in asking about the types of things that were going on with the arts at Keyano and in the community.  I invited them into my office, which has grown into a welcoming and warm space for dialogue, and delighted in hearing about this accomplished artist, her project "My Brother's War", and her intrigue about our community. Had I not had to leave to go to a meeting, I got the sense that the visit could have gone on in perpetuity.

Deng Alith (aka King Deng) has popped in a number of times since we met in the coffee line-up in Elements, the cafeteria on the Clearwater Campus.  In that short initial meeting I found out that he was a student in our social work program and an accomplished rap artist. 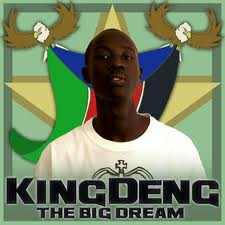 He ran back to his locker to grab a copy of a CD he had recorded in Winnipeg as I ran back to my office to grab him a copy of my business card.

"Pop into my office some time, any time," I said.  "I'd love to interview you and find out more about your music and how you came to be here."

On his subsequent visits, I have learned about his shattered youth, growing up in South Sudan.

"The papers say that I am 28, though I think I'm older.  You see, I grew up in a time of war. I am one of only four survivors from my town."

Deng, his family and community found themselves in the middle of a tribal conflict and genocide.

"It was about five in the morning when it started.  At first, I thought it was thunder, just a storm passing through.  The bombs were followed by guns."

His father was killed by an AK-47 right in front of his eyes.  But before he died he yelled to Deng, a young boy at the time, to "Run! Run!  Whatever you do, just keep running!"  He did.

Growing up in an area of Sudan lush with vegetation, forests and tall grasses, he took off as fast as his feet could carry him as bullets raced over his head.  He survived alone, deep in the wild, along the Nile River.

"I had to stay close to the river, because it was safer," he shared.  "In the forest were too many dangers, like lions and pythons."

Eventually he returned to his village, or what remained of it, now back in the hands of his own tribe.  Over time, he managed to avoid ministrations to join the soldiers and made his way to Egypt and finally Canada.  He spent a number of years in Winnipeg before coming to Fort McMurray to visit his sister-in-law.

"When I saw the hills by Abasand, it just felt like home," he said.  "I decided to stay.  I'm in the social work program at Keyano College because I want to help other people overcome hurt like I have."

Deng is intent to complete his studies and hopes to connect with members of the Fort McMurray music community and one day record another album, as it is through the music that he finds healing.  He has returned to his home country a number of times, where his mother still lives, protected everywhere he goes by an armed cadre of guards.  He dreams of the day when tribalism has been obliterated and peace can reign.

The open door in just the past week has drawn in some amazing people including a lovely lady looking for singing opportunities,  one of the very small percentage of females who work in the oil sands and live in camp, though she just recently moved into town.  She has been flying in and out for six or seven years, and in the short visit that we enjoyed, I got the sense that she was longing for connection, opportunity, and quality of life things like singing in a choir, or attending lectures.

"I can't wait to listen to Malcolm Gladwell on Thursday," she said.  "I recently picked up Blink! at the library and thought it was amazing."

"Have you read The Tipping Point yet?" I asked.

"Wait here," I said, as I ducked into my office and grabbed a copy of the book which had just returned after lending it to a colleague over Christmas.

"Here," I said, handing it over.  "This will ensure you come back and see us again."

The next day, another fellow drifted into our world, looking for opportunities, longing for something beyond a fat paycheck.

"I want to volunteer.  I'll do absolutely anything," he said, interested in theatre, music and performance.  A process operator working three days, three nights, six off, he's reached a point in his life where he wants more, a life outside of work.  His desire and intent to do something about it signal a potential tipping point in that early affluent 25 to 35 year old segment that makes me smile brim to brim. This group consists of people who have come here from around the world to earn a living, people who are discovering that they equally deserve a life.  We are ready, willing and able to help them make that leap.

A Guiness World Record holder and world-class beatboxer (Balu), a top-level hip-hop artist (TK), a trusted community colleague all passed through our open door in the last few days.  We share stories, explore possibilities, and dream large.  We bask in the energy that is created by a sense of welcome, wonder and opportunity.

Our door is open.  We hope you wander in real soon.
Email Post