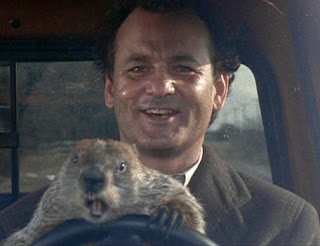 I wonder if anyone else gets this Bill Murray Groundhog Day sensation every night when we do Hometown...The Musical!? People come and go back stage in almost the same order at approximately at the same time night after night.  It's like we're reliving the same day, over and over again.

For instance, as I leave stage left and turn the corner to go down the long hallway to our choral mic location on stage right near the end of the show, Melba Seto is always walking toward me wearing her beautiful red winter coat and surgical greens. 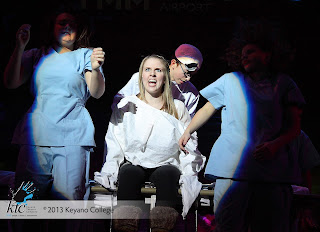 When we finish our head-banging during the "I Wanna Be Sedated" scene in Act One, the entire company ends up in that same hallway going in opposite directions, completely chaotic but eerily ordered.

Ben McCully, Russ Hancock and myself always end up at the upstage right door at exactly the same time, just before we head up to the second level platform for "Fix You".

Mostly, everything happens and moves like clockwork.  There is a comforting familiarity to the patterns, the flow, and the people - until something goes askew. 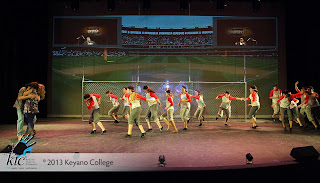 As I stood backstage, just out of the audience's sight line, waiting to support Tim Heggie with a few lines in "Paradise by the Dashboard Lights", something had changed.  There is a spot in the choreography when I have several dancers who are looking right at me as they bob their heads back and forth.  They are always there, in the exact same spot, night after night - except for yesterday.  Kayla and Taylor were just a bit downstage, enough that I couldn't see them.

What I didn't realize, until I glanced into the opposite set of wings, is that one of the dancers was injured and had left the scene.  I later found out it was Jenna who rolled her ankle and was carried out by Patrick and Jennifer as the song arrived at Jon Cestnick's "Safe at home!" conclusion.

The GDS dancers are such pros that they just kept going, adjusting ever-so-slightly and intuitively, absolutely nothing on their faces to betray the fact that something had happened.

An ensemble of this size is a living breathing organism, a complex set of moving parts that operate in utter synchronicity thanks to the repetitive process we have been through to get us here.  And even if one small thing changes, our collective senses are heightened and we adjust.

Jenn Lynch was dancing in the imaginary snow last night with Mackenzie Walas when something fell out of her pocket on to the floor.  I'm not sure if anyone else saw it, as she seamlessly swooped down, scooped it up, and plopped it into her pocket without breaking her step.  She made the instant decision that anything left on the floor would become a hazard, as so much happens in the dark.  It was a thing of beauty to watch this talented young lady respond like a seasoned pro and keep on going. 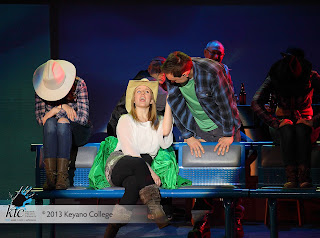 I'm sure the repetitive sensations are similar for the crew, and that they are constantly responding, adjusting, and moving on.  Dylan (my 14 year old son) was working the follow spot last night when his leg gave out during "Northern Girl".  The long hours of sitting, lack of sleep and walking up and down the theatre steps have taken their toll.  But just like Jenna and Jenn who kept the train moving last night, he picked himself up and carried on, most of us none the wiser.

No two shows are ever the same, just as no two audiences laugh or clap in the same spots - therein lies the magic and wonder of the live theatre experience.  We have three performances left - Friday and Saturday evenings are sold out with about 70 tickets remaining for the matinee performance - and each will be different, relying on 120 hearts beating as one to keep the train moving, no matter what happens.
Email Post