In praise of Nolan Haukeness

Not taking anything away from the amazing people who performed at last night's fundraising concert at Timberlea Public School, I feel inspired to say a few words about Nolan Haukeness. 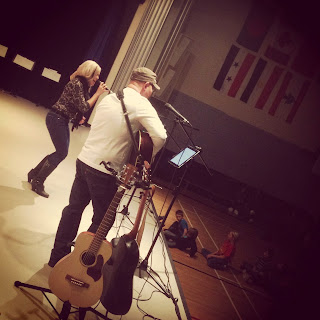 Before I do that though, I have to express my appreciation and admiration or the work of Karla Power, who produced a stellar event with a great balance of talented students and community artists.

It was a Hometown…The Musical! reunion in many ways with great performances from Shantelle Davidson (such a class act), Janelle Leask (what a voice!), Tim Heggie (getting ready to play Jean Valjean in Les Mis), The Sentimental Gentlemen (with Mackenzie Walas sounding awesome), Russ Hancock (who channeled Garth Brooks) and the entire Boostrom family (Mel, Deanna, Karlie and Kelsea) who demonstrated once again how much they love music and how much they give to this community.

The student performers we saw last night filled me with incredible optimism about the future of arts in Wood Buffalo.  They inspired huge applause from the large audience of parents and community members, helping to raise money for the school's breakfast program.

I was particularly impressed with Krithika who is a musical theatre star in the making. She did an outstanding performance of "Wouldn't it be Loverly" from My Fair Lady.  Her voice, stage presence and interpretation of the material made me think that it won't be too long until we see her in a Keyano Theatre Company production.

Mihir Gothal also left a strong impression with me.  He was patiently waiting his turn in the wings, looking very dour.  I looked over at him, put two fingers on either side of my mouth and pulled up.  It took him about three seconds, but when a big bright smile appeared, I couldn't help but go over to have a little chat.  Mihir is in Grade 5 piano, about to move into Grade 6.

"How much do you practice each day?" I asked very quietly, as another performance was happening on stage.

"About two hours," he replied.

He obviously loves playing, which became abundantly clear when he did two songs, each of which were utterly beautiful.

Apart from Karla, two other music teachers from the district added sensational sizzle to the evening concert: Val Gondek from Thickwood Heights and Dominique Blais from Dr. Clark.  When they did a trio performance of "The Water is Wide" and "Fare Thee Well Love", my heart almost stopped because it was so beautiful.

Oh! Before I finally get to the meat of this particular blog post, I have to send a shout out to my emceeing co-host for the evening, Devanshi Patel.  I'd work with her any time because she was awesome.  She rolled with the punches like a real pro and kept me on track all night long. 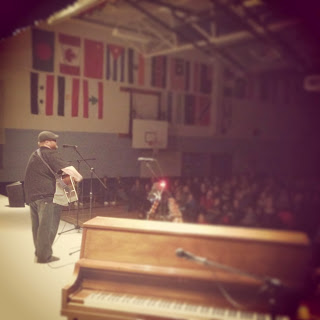 I love this guy, and not just because he's from watermelon head province like me, but for a whole series of additional reasons.  He performed three songs at last night's benefit concert and decided to "call an audible" and change one of his selections to a Bob Dylan tune, as he knew I was a fan.  He did a great job and surprised me once again, with a talent that I didn't know he had.

A long-time radio personality in town, currently the morning host on ROCK 97.9, Nolan is one of those guys who could be working in any major market in Canada.  As a former radio program director, I've always felt that he is that good.  But he has chosen to put down roots in Fort McMurray and continues to stretch his creative muscles in ways that inspire me.

He (along with his Country 93.3 colleague Jerry Neville) was such an important part of the energy that was created on stage and off during Hometown…The Musical! in February.  He deeply connected with the large cast and delivered performances night after night that were stunning, despite the crazy schedule demands of having to get up at 4 am after being up well past midnight.

This summer, he wrote and produced his first play, a fantastic offering at interPLAY called The Order of the Black Cloaks.  Inventive, funny, and unexpected, if this one act is any indication, Nolan could create quite a sideline for himself pursuing playwriting.

He also wrote his first screenplay during the film challenge that happened during the festival, and along with a couple of friends directed a short film, in which I was honoured to appear.  As I watched the sweat pouring off his brow, processing what needed to happen next during the filming, a big smile on his face, I was struck by how much fun the guy was having creating something from nothing, and exploring yet another creative medium.

He is also a regular contributor to the Fort McMurray Today Saturday Edition, saying what needs to be said in a way that is informed, compelling and smart.

So, as I watched this amazing man belt out his voice in front of hundreds of elementary school kids and parents on a Friday night, when he could have chosen to be doing almost anything else, opting instead to help a Hometown! friend and support a great cause; I thought it was time to call my own audible and throw some long-deserved recognition to this man who gives so much of himself to our community, every single day.

Nolan Haukeness is a Fort McMurray treasure, a creative force who contributes so much to what makes our hometown such a remarkable place.  He has my undying respect and gratitude for everything he does.
Email Post