"This was the first time in 10 years that I didn't go out trick or treating," said Heather last night.

"And how do you feel about that?" I asked.

I'm guessing that most families have their traditions when it comes to special days like Halloween.  In our family, Heather has generally gone out with the boys through the neighbourhood while I manned the fort back home, dishing out the treats.  She enjoys dressing up and the fun of seeing all the little ghouls and goblins running up to the front steps of strangers' homes while their patient parents wait on the sidewalk.  I enjoy not dressing up and bouncing back and forth from doing some work in the living room to dipping into the candy bucket and playing sugar-basketball with all the treat bags that open on cue the moment I open the door.

In most years, we've had four candle-lit pumpkins on the front stoop or in strategic locations in the flower bed - pumpkins carved the evening before, with newspapers covering the dining table and heaping bowls of pumpkin guts close by.

As Dylan has grown older - he is now 14 - his interest in dressing up has waned, but Ben still gets a charge out of figuring out what his costume is going to be.  The pleas to go to the Spirit of Halloween store usually start shortly after they begin hiring young kids in costumes to stir up excitement by standing at various spots on Franklin Avenue. 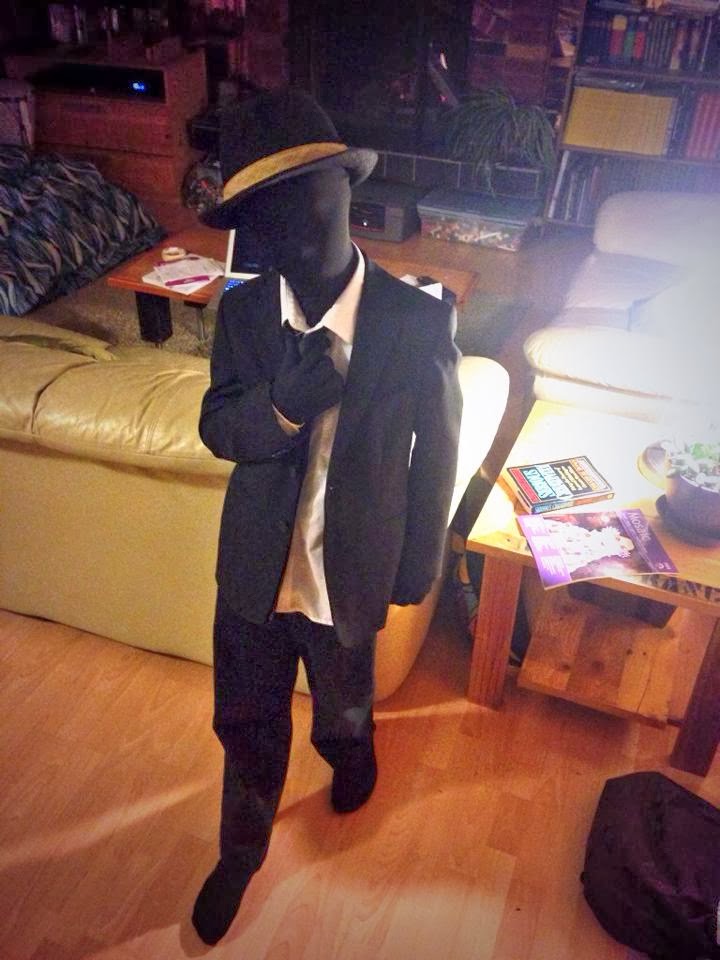 This year was different though.  Instead of four pumpkins, it was one: Ben's.  Instead of Heather taking both boys on a tour of the neighbourhood, Ben went out with one of his friends and his mom, wearing a black body suit, jacket, shirt, tie and hat.  Dylan stayed home preparing for the Extra Life challenge coming up on Saturday, a 25-hour gaming marathon to raise money for the Stollery Children's Hospital, a facility that has played a big role in his life. (You can pledge your support here)  Heather ended up doing most of the dishing out this year, while I set at the kitchen table finishing my watercolour portrait of Lou Reed who died at age 71 the other day.


Most days blur into the ether of our lives, but not Halloween.  It is a seasonal marker that we remember, a day that reminds us that Gala is just around the corner with the Christmas holiday season just beyond the horizon.  It is that day in the year when most everybody hangs out at home, eagerly awaiting the sound of the doorbell or cries of "Trick or Treat!"

Eventually Facebook posts begin either bemoaning the drop in the number of kids (our neighbourhood this year) or sharing tales of having to raid the school treat stash because you ran out of candy (other areas of town).  The evening usually ends with heaping piles of candy bars, chips, cans of pop and assorted candies and confections on the dining table - all the items that "may contain peanuts" shuffled into a different pile.  Those will be for Dylan, Heather and I as Ben is rather allergic.

Soon the snow will fall, covering the Halloween decorations that Ben put out a few weeks ago.  They will sleep peacefully until spring, when the snow will melt and they will get picked up and put away, ready to be used again for Halloween 2014.
Email Post