Some mornings I really struggle trying to find something to write about.  This is not one of those mornings.

In preparation for designing a poster for an upcoming #YMMARTS Happening called "Let's Get Sketchy!", I asked creatively inclined folks in my Facebook world to help out.  The task was simple.  As there is a late 1800's theme to "Let's Get Sketchy" - it is a prelude to a Saturday evening performance Catalyst Theatre's VIGILANTE, which is set in that period - people were asked to sketch a photograph from that era.They could use whatever tools they liked, but they were asked to limit themselves to five minutes.  Simple as that.

Unfortunately, a person who shall remain nameless, took offence to the ask, and took over the conversation string in a way that I've rarely seen.  In his mind, I was asking professional artists to do something for free.  Perhaps he had to weather a similar ask in recent days and needed somewhere to spew his vitriolic rage against a system that often undervalues artists and their work? (My understanding is that He who shall not be named is a musician) Perhaps he had just had a bad day? In any case, he was off-base in his misdirected anger about professionals being asked to do something for nothing, because THIS was not THAT. 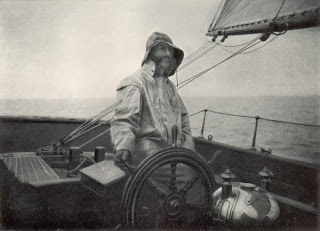 Heather, Ben and I actually tried the exercise after dinner.  We used a different picture from the period (shown above), and set out to draw it in five minutes.  The results were staggeringly different.  Ben focused on the ship's wheel using pencil. 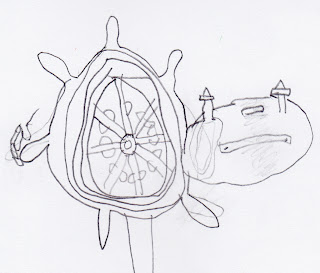 Heather used coloured pencils and a loose and free approach. 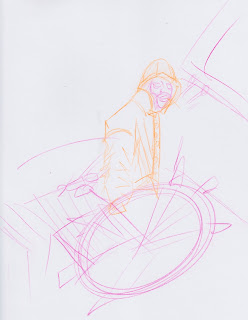 I used my favourite black OptiFlow black pen from Staples and did more an outline drawing. 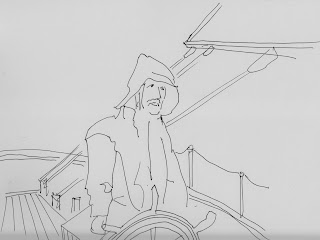 It was a fun five minutes and an experiential preview of what creative souls will experience on the evening of November 30th when a number of different arts organizations and their members converge on Keyano Art Gallery and the theatre lobby starting at about 6:30 pm.  Everyone is invited to come out and enjoy the "Happening" that will include actor models dressed in period garb and posing for both sketchers and creative writers in a variety of different spots.  Musicians will be providing a live soundtrack to the 90-minute creative adventure as a number of photographers capture the fun in real-time. Absolutely anyone and everyone is invited to participate, or they can just watch, visit and enjoy some good food and even better company.  We hope that patrons embrace the whole experience and cap it off with what promises to be another stellar Catalyst Theatre production.

All of this will be going on as a full house arrives for the evening performance of VIGILANTE, the second production in Keyano Theatre Company's Telus Drama Series.  Theatre patrons will be able to watch artists of all skill levels enjoying the process of sketching and writing, while being treated to some awesome local music.  When they come out at intermission, they will be able to see all the creations as they will be displayed in the gallery. 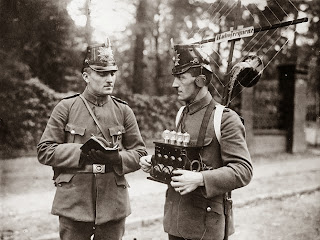 I ended up posting the picture above and received some fascinating submissions from a variety of different people including my nephew Isaac, a talented artist from Saskatchewan; Sharon, a local realtor and a fantastic artist (the large abstract in my office was painted by her); CJ, a local reporter and prolific writer; and several others, including one by Robert Woodbury, a professional artist who has worked with me at interPLAY many times over the years, who chose to participate.

I have to admit, I got a little hot under the collar watching post after post by He who shall not be named.  As our connection was an accident in the first place - he has the same name as a fairly prominent local leader - and as he was literally poisoning what should have been a very positive conversation string, I waved a final Facebook bye bye and both unfriended and blocked him.  Before I was done, I shared this parting thought:

To He who shall not be named: This evening I am volunteering my time to support a community arts event. I have fought for the rights and respect of artists as a volunteer for the past 15 years. I also advocated for the arts during my short time as an elected official. I will continue to support, encourage and celebrate the arts till the day I die….as artists (all artists!) are the soul of our communities and country. And that's all I have to say about that….Amen!