I recently returned to portrait painting after a two-year hiatus.  It's difficult to pin down where the inspiration came from, but losing the election and having unexpected time on my hands probably helped light the spark.  In reflection, some of my best work happened after experiencing a sudden loss or setback. 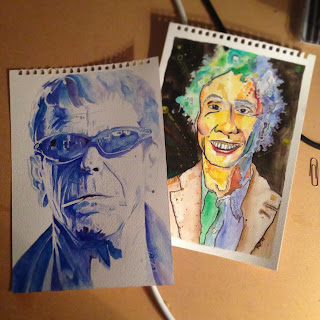 After painting a crazy portrait of Malcolm Gladwell and a study in blue of the late Lou Reed, I was thumbing through my collection of Vanity Fair magazines, searching for a photo that could inspire my next project.  That's when I saw this stunning photographic portrait by Anne Leibovitz of Ian McKellen.  This 75 year old actor has a resume as long as my arm, but probably is best known by the current generation for his portrayal of Gandalf in the Lord of the Rings films. 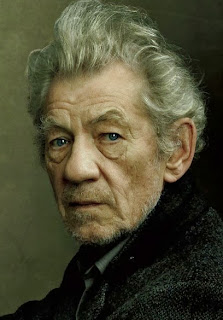 The watercolour paper that I use is 10" x 7", not that large.  I begin by sketching out the prominent features of the face, hair and clothing in pencil.  The proportions need to be right before I bring out the brush.  There is a fair bit of erasing at this stage, especially around the eyes as getting them right is critical to the process.  Once I look at the sketch and am able to recognize the person, I move on to the next step: putting down some colour. 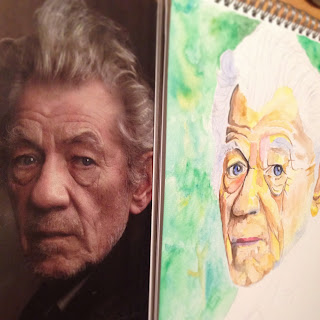 My style, if I deign to call it that, involves using my two tones of yellow to punch out the spots on the face that are catching the most light.  From there I move into oranges, reds, browns and finally, black.  It's a slow and methodical process, not without its frustration as it takes a long time to come together. 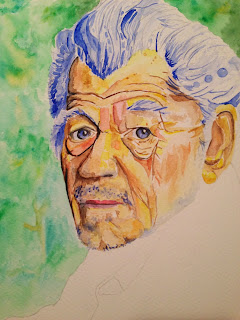 Trust is a big part of painting portraits, for me. In all cases I reach a point when I feel the painting sucks and want to walk away.  That is the most important moment.  Do I trust the process and soldier on, or do I give in to the frustration, rip the page out of the book and burn it in the fireplace?  In most cases, I've chosen the latter and went on to finish portraits that are somewhat interesting. 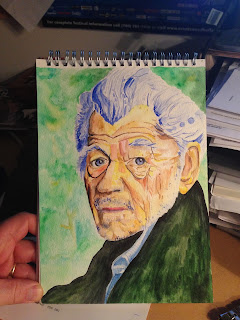 I got the sense that this Ian McKellen piece was going to turn out well early in the process.  Because of the beautiful intricacies of his well-worn face, it has taken longer than most portraits to get to the stage I am at this morning - probably 8-10 hours.

When I next sit down to work on this one, it will be to add some of the finishing touches, the micro details that will hopefully help him leap off the paper.  It certainly has the potential to be added to my business card collection.  We'll see in a couple of days.  The painting will officially be "done", when I grab my smallest brush and add my initials and the year.  That is my cue to walk away.

In the meantime, I have to say how nice it is to be painting again after so long.  I've been doing a lot of drawing, mostly in the form of mind maps, but this is different, more immersive, reflective, and challenging.  I think I'll keep doing it for awhile.
Email Post