The greater the pain, the better the work

I've been drawing faces for as long as I can remember.  I have no memory of what got me started, but there is lots of evidence that I began really young, as I have a folder full of drawings from the mid to late 1970's and early 1980's. 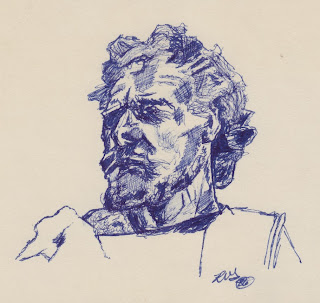 I went through a period in the 90s, after a painful divorce, when I dived into scratch art, creating a number of striking portraits including Eric Clapton and Willie Nelson.  The careful, detailed work helped settle my mind and heal my heart. 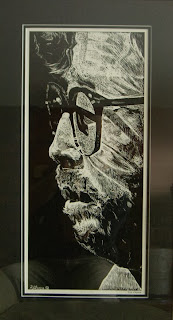 In Fort McMurray, I started exploring painting and produced a number of interesting works, some of which still hang in houses in the area and others that have disappeared with the passing of time.  This turned into my yellow period, when I played with a series of portraits using only black and yellow. 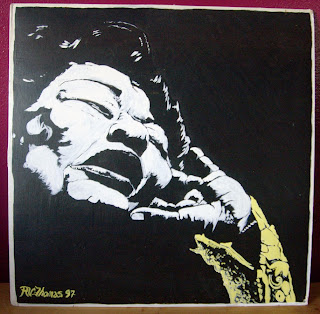 I did one of Ella Fitzgerald on a record jacket, another of a young Frank Sinatra, and even a larger acrylic portrait of Bob Dylan that hangs on the wall in Misty's office at Keyano Theatre. 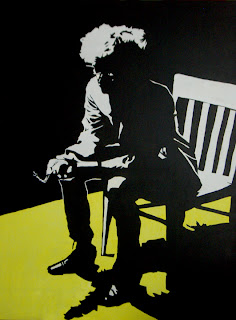 I have a box of photographs that inspired the paintings and drawings over the years.  I've forgotten where many of the paintings went, as they were mostly given as gifts, expressions of friendship and love.  The photographs remind me of pieces long forgotten. 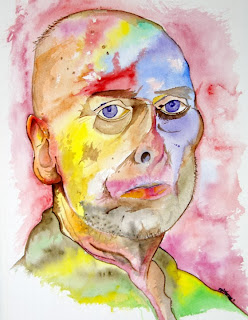 After a lesson from my father-in-law Neil, I dived into my watercolour period, creating the series of portraits that adorn the back of my business cards.  It was a productive couple of weeks as 2011 turned into 2012 - each day during the holidays resulted in a new work.  Some were good (Mike Tyson, Albert Einstein,  Malcolm Grandjambe), others were less strong (Conrad Black, Fidel Castro, Steve Jobs), but they all had a similar "voice", a way of communicating that tied them together.  Then I stopped.

Getting caught up in life, business, politics and other things knocked me off the painting path till just recently.  I picked up the brush again after the dust had settled on the election and produced a couple of different portraits: a wacky treatment of Malcolm Gladwell, a study in blues of Lou Reed (following his death), and Van Gogh-ish painting of actor Ian McKellen. 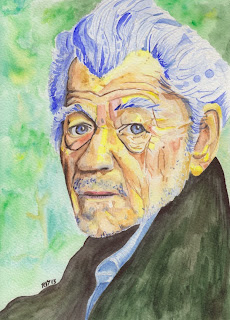 The lightbulb moment I've had while sitting here writing this is that in almost all the cases, my most prolific output of art, whether it be drawing or painting, has occurred after a period of personal trauma.  Relationships coming to an end, the death of a grandparent, and changing professional circumstances have all inspired great creativity and hours spent disconnecting from the pain and realigning with my true self.  It was my dad's cancer diagnosis and emergency surgery that preceded my watercolour series.  It was losing the election that triggered the return to painting a few weeks ago.

"The greater the pain, the better the work," said Heather when I shared this revelation with her this morning.  "Isn't that interesting!"

I guess we all ways of "returning to the centre of our hearts", as elder Elsie Yanik said in a beautiful prayer earlier this year.  My way is through the pen and the brush, hours spent in pause and purpose.

You can see the entire watercolour series and portraits by other artists on the Portrait Artists of McMurray website by clicking here.
Email Post