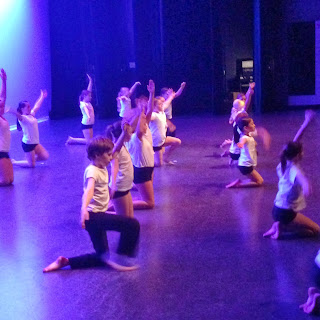 This was the third year that I had the privilege to emcee the Young Choreographer Ball, an annual event to challenge and showcase young choreographers.  In 2011, I recognized some of the names, mostly from previous dance contests that had occurred at various festivals.  Last year, both names and faces became much more familiar, as we had already begun rehearsals for Hometown…The Musical!, which featured the core team of dancers from Generations Dance Studio.  So, by the time I arrived for last night's competition, in a sense it felt like coming home.

Organizers decided to change things up a little this year.  Instead of having the audience judge the presentations, they enlisted the help of Theresa Wells, author of the McMurray Musings blog, and Steph Link, Founder of Brazen Elephants Productions.  We were quite a trio, chatting it up behind the stage as the audience pored into the Suncor Energy Centre for the Performing Arts, realizing in one fell swoop that we were all originally from Saskatchewan.  Steph even had her Riders socks on in honour of what is going down today in Regina.

Choreographers introduced, we got to the business at hand and began the competition.  In the half light of the wings, I played the game in my mind of trying to name all the dancers I possibly could: Sarah, Kaylen, Morgan, Emma, Lexi, Alex, Shani, Nicole, Victoria, Julien, Carly, Jon, Alyssa, Leanne, Piper, Sara, Taylor, Kayla, Ali, Hanna, CJ, Grace and Amanda.  To be honest, I had done my homework before leaving for the theatre, reviewing the names from a photo in the Hometown program.  Getting the names right is important to me, as anyone will tell you who has read or seen my 10 Immutable Laws of Effective Networking.

I was impressed by what I was able to see from backstage.  Some of the choreographers chose to use more senior level dancers to execute their ideas.  Others leverage the energy of large ensembles of emerging dance phenoms.  The variety was exceptional, the energy and determination, inspiring.

Third place ended up being awarded to choreographer Victoria Naud and her presentation of "Firework".  Second went to Lewis Heinzlmeir and his Northern Elements crew (the most dexterous and nimble adults I've ever seen) for "Down the Road".  First place and the winner of the $500 scholarship donated by Lafarge Construction was Nicole McMillan for "Reason". 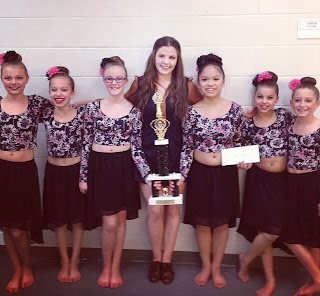 Even from my position in the wings, with limited visibility, I could tell there was something special about Nicole's ensemble.  The synchronous movements, the punctuations and the overall effect was intoxicating.  Perhaps the audience eruption at the conclusion of the piece was the perfect indicator of what was to come for this group. 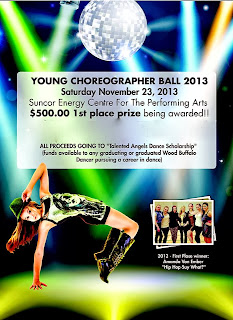 The Young Choreographer Ball raises funds for the Talented Angels Dance Scholarship.  Last year's recipient of support, Jenna Fewer, is now in Vancouver training with the Source Dance Company.  It's an amazing event that encourages, elevates, challenges and inspires local dancers to explore new ideas and create something that is completely their own.  What began as a studio-specific adventure has now widened out to include all dance companies in town.  Much thanks needs to go to Miss Kim Hurley and her amazing team of volunteers who do such a great job putting this together each year.
Email Post