A meme (meme: an element of a culture or system of behaviour passed from one individual to another by imitation or other non-genetic means) emerged on Facebook over the last few weeks.  People began listing little known facts about themselves.  The organic "rule" that developed was that if someone likes your post you were supposed to assign them a number.  They would then need to share that number of little known facts about themselves and assign numbers to everyone who responded to their post, and so on, and so on, and….

I was assigned the number 6 and quickly excavated some things that people might not know about me. It was a harder exercise than it looked, as I write a lot about my quirks and quarks in this blog and other places.  As a lighter, less controversial topic than yesterday's post, I thought I would share 10 things that might be surprising…or not.

10 random things about me

1. I make my morning coffee using a Bodum coffee press. Two cups before breakfast - Splenda, not sugar, with a vanilla flavoured soy beverage.

2. I'm a pretty healthy guy, but I have this anomaly in my left ear that leaves me virtually deaf (on that side) for months at a time.  The good news is that once my ENT doc installs a new tube in my tympanic membrane (eardrum), life gets deliciously noisy.  Eventually, the tube falls out, the eardrum seals up, and I slowly go deaf again.  So, if I ever seem to ignore you, this might be the reason.

3. The genre in my iTunes that has the most songs by a country mile is…….JAZZ, with over 2000 songs.

4. I'm a pretty good carpenter, a passable plumber, but an inept and trepidatious electrician.  All the wiring fixes in our house are done by my wife.

5. I drive a 2008 Ford Escape.  We used to drive a mini-van, but we hit a sizeable pothole in Edmonton that caused enough damage to convince us that it was time to upgrade.  We shopped around the city - we were there for a long stretch as Dylan was having leg surgery - and found what we wanted. Before we pulled the trigger on the purchase we called our local dealer (Northstar) and asked if they had something similar at a similar price.  They did. And Heather raced home to make the deal.  Buying local whenever possible is an important value in our family.

6. I spent 10 years in the radio business, finishing that portion of my career as Senior Program Director at the OK Radio Group in Fort McMurray.  I was a member of the team that flipped CJOK (Country 93.3) from AM to FM.

7. At a country music radio industry convention in Nashville in 1997, I attended a session where stars sat at tables signing autographs and voicing station-specific messages for clambering radio personalities from across the US and Canada.  Stars like Randy Travis and Alan Jackson had huge lines.  One table with three ladies had no line at all.  I felt sorry for them, so I went over to say hello, got their autograph and had them voice a couple of liners for us.  It was a lovely visit, and I think they appreciated the attention.  That was the one and only time I met the Dixie Chicks.  I still have that autographed photo in my tickle trunk. 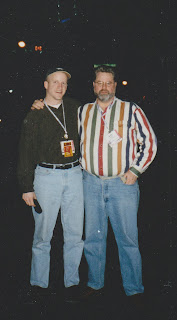 8. I got involved with interPLAY early in 1996 thanks to radio station manager Kelly Boyd.  He suggested that with my theatre background it might be a good fit.  It was. It went on to become a huge part of my life for the next 13 years. 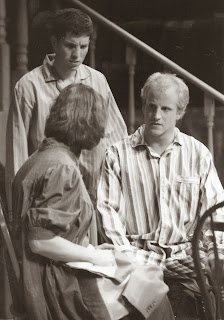 9. My most bizarre stage moment occurred in 2000 playing Biff in Death of a Salesman at Keyano Theatre.  On closing night, about 40 minutes into the show, I fell while exiting the scene.  It felt like I had been hit in the back of the leg by a blunt axe.  While my brain tried to process what happened, I desperately and painfully did a quick change and made it up to the second level of the set for my next entrance.  It took everything I had not to pass out.  I did the remaining two hours of the show hobbling from one piece of furniture to another.  Ironically, I didn't even go to the hospital, opting to attend the cast party instead.  The following morning I found out my Achilles tendon had snapped.  I had surgery in Edmonton the next day and spent the next 6 months in a walking cast.

10. When the former President of Keyano College asked if I would be willing to accept a secondment into the role of Manager, Marketing and Recruitment in 2006, I asked my boss what she had said about me.  She shared a lot of glowing thoughts about my marketing abilities, community connectivity and various other things.  "I also told him that you aren't the strongest writer," she said.  That statement stuck in my craw and I set out to improve my writing skills.  Dozens of published articles and over 800 blog posts later, I continue to work at it.  Thanks Julie!

Those are my 10.  If you read and like this post, I'm not going to assign you a number.  I'm not going to suggest you do anything at all, except that which inspires you.  Have a terrific day.
Email Post